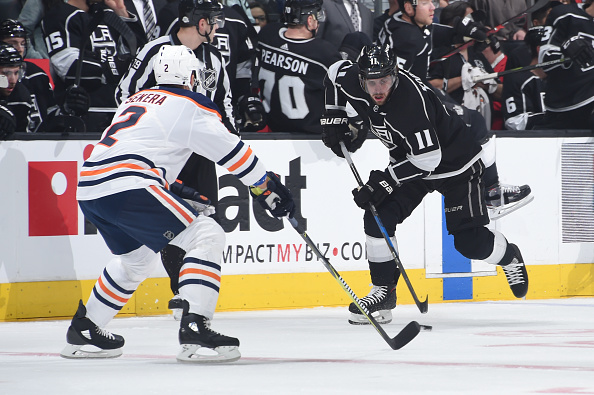 On what impressed him about the effort:
The game kind of had a couple of different personalities to be honest with you. I thought we got off to a good start and did a good job of getting pucks deep and getting pucks to the net and then in the second period we kind of let them back in it there a little bit. I’m not sure if it was because they blocked a lot of shots, I think they’re good at that but we just went away from shooting the hockey puck there. We had a 4-on-2 I think right before they scored their second goal so I think when you stop putting pucks to the net, you stop getting people to the net, and you don’t put pucks at the net they usually end up in transition going the other way and I thought we got away from that a little bit but at the end of the day we wanted to take care of these two games at home and get points in the bank before we went on the road and I thought the guys did a good job of getting that done here so we’ll take, learn from it and try and get better on the road.

On needing two goaltenders to win consistently in the NHL:
I think you need two goaltenders and I think, in my opinion there’s been a lot of talk recently, both guys playing, especially the goalies because there’s only two of the them but the season has been extremely odd. If you look at the first 50 games we’ve had a four-day break for the All-Star break, you’ve had a three-day break for the Christmas break and you had a five-day break for the bye-week so with all these breaks in there you’re trying juggle time and keep guys sharp and get them in the net but from this point forward that’s where it’s really going to pay dividends so we think we have two goalies that we believe in a great deal and we have two goalies that are capable of winning us hockey games and we’re going to need them both down the stretch.

On Paul LaDue’s confidence after scoring his second goal in his last three games:
I think Paulie’s game is beyond just the goal production. Both goals he scored he did a really good job of getting his feet around the puck, moving and changing the angle and getting it through and I think it’s something that he’s really worked at. To his credit he went down to Ontario and to the people in Ontario, the development staff and Mike Stothers and his group. They really helped him better his game down there. He has come back a better player, a more confident player and he’s a guy, I think, that can help us at both ends of the rink so he’s playing the way we thought he could but he really, I think, went down with the right attitude and worked at his game and now he’s come back a better player. I think any player that scores gives you confidence but I think his confidence comes from the trust that he has in the coaches to get out there and play. I think he and (Muzzin) have played pretty well together and we’re going to need some balance on the back-end when we go on the road here so it was good to see.

On the posts the Oilers hit in the third period:
The post was a good friend of ours tonight. I thought they had some really good chances. (Lucic) hit a couple of posts. The one sequence I think they hit at least two posts, so we’ll take it. I think sometimes if it weren’t for bad luck you’d have none at all so I think we had some luck there on those plays there but at the end of the day I thought the guys dug in and did a good job there and got the ship righted and found a way to win a hockey game before we go on the road.

Spoke too soon. NOW call the cops for larceny by @dkuemps35. With a post and crossbar as accomplices. pic.twitter.com/gw1CyNB3Fd

On slowing Connor McDavid:
You know what, he’s tough. There’s a couple of guys in the league that I think are extremely tough to defend. I think Crosby is one of those guys and I think he’s one of those guys. They have so many elements to the game. Speed and quickness and smarts and now that he’s playing with Draisaitl again they seem like they have really good chemistry. You try to take his time and space away, you try and limit his speed on the rush because I think it really sets up the rest of his game but it’s easier said than done. It seems like he can skate forever so he’ll extend his shifts sometimes and line changes, you really have to be aware when you get people on and off the ice because he can really capitalize on those situations, so he’s a great player and he’s certainly a difficult guy to defend. So give credit to the guy, I mean (Kopitar) and Drew especially, they look forward to those types of challenges and I think they’re great players themselves. It’s kind of fun to watch, as a coach, to see great players like that go at it and it was again tonight.

On winning consistently on the upcoming road trip:
I think our back-to-backs have been really good this year. I think this team works hard. Matt Price and (Chris Kingsley) and our staff does a good job of managing their fatigue, so we have a tough travel day tomorrow but two big games on the road so we’re going to need contributions from everybody, four lines and that’s 14 forwards. We’ve talked about that as well. We’ve got 14 healthy guys right now. We’re going to need all of them and we should have healthy defensemen getting on the road too, so we’re going to need to take advantage of all those guys but regardless of who’s in the lineup we need (inaudible) contributors playing a really good team game because we have some good teams in front of us.