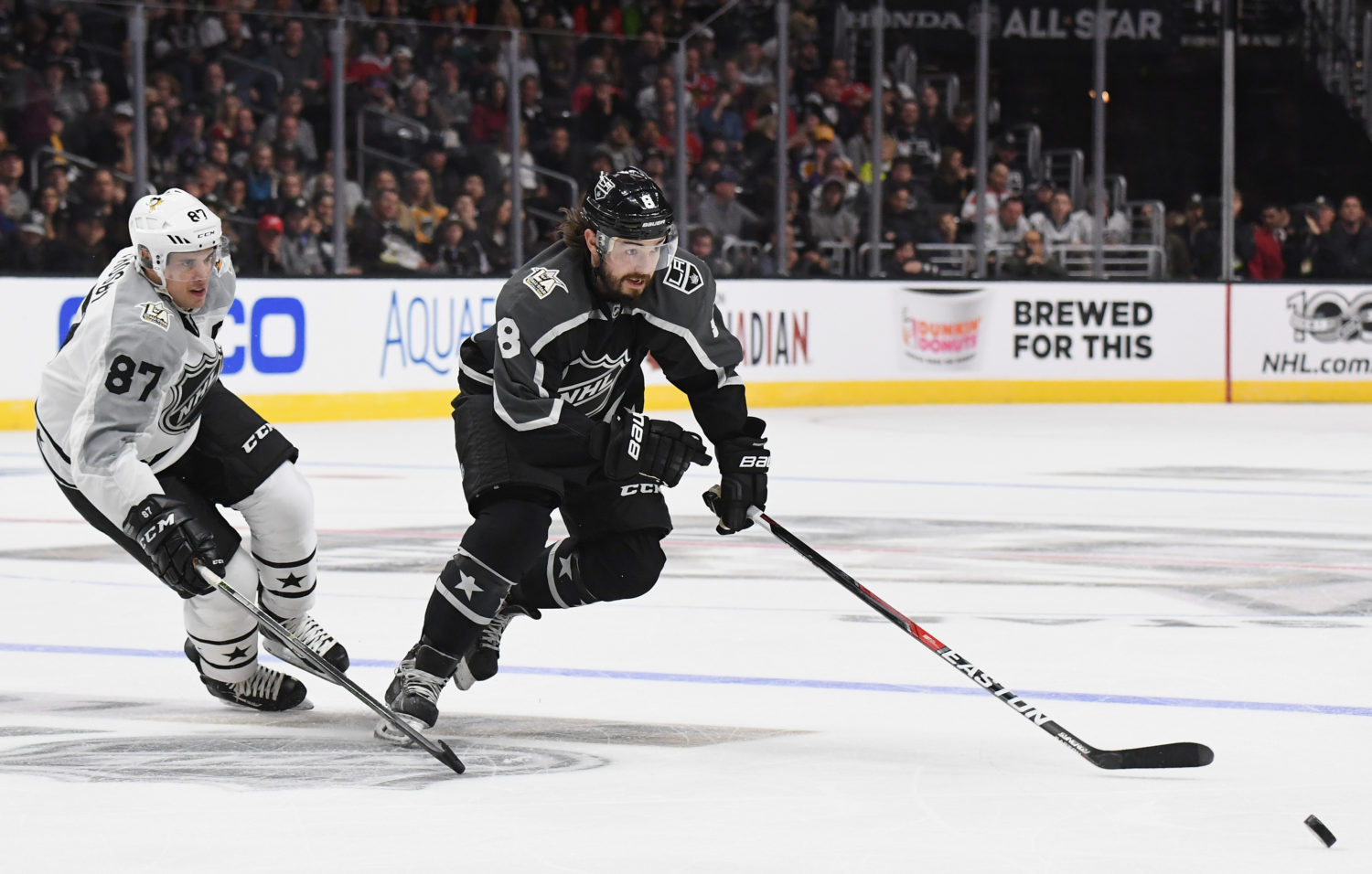 On Jeff Carter skating and his continued rehabilitation process:
It’s just functionality more than anything else. He’s been off for an extended period of time. He’s come a long way in the healing process and getting his mobility back, and clearly the next step is getting him on the ice and skating motion, so it’s walking before you run here for him. It’s an important step. He’s not skating every day, but he is skating now, and I think that’s a really good sign, and obviously it’s a step forward in his recovery process. We’ll get that ramped up as we move along here, get him doing more and more stuff, but I think the fact that he is on the ice is a good sign.

On how to foster consistency with everyone playing well collectively:
If you look at your team, I think any good team, you’ve got a core leadership group that’s going to lead the way, and we certainly have had that. A real key to a good team beyond your leadership group is having a really good secondary core where you’re not coming into the lineup wondering what you’re going to get. You know exactly what they are. Trevor Lewis, for instance, is a guy like that. Martinez is a guy like that where you knew exactly what you’re getting. There’s stability in how they play and they’re a really good secondary leadership group, and then the young guys come in and show that they can make a difference in the game. Sometimes it’s experience. You say, ‘well, experience sometimes is overrated.’ I’m not sure it is. I think experience is important. But it’s a process all teams go through. Teams at different points of the season where they play really well. They have dips in their game. I think with the group we have here, they’ve done a really good job no matter what’s going on of being honest with their game, looking at it and knowing we can be better, not being a temperamental athlete. Being honest that, ‘hey, we can do these things better, and we know how we need to play.’ Then you get to work at making it better. You see it, you do it, and then you go out and execute.

On whether the team enjoys the challenge of snapping a losing streak against Pittsburgh:
It’s a good challenge for us, and for us, it’s a good opponent to put our words into actions. We know we’ve got to play better defensively. We know we’ve got to be on the right side of pucks more, and Pittsburgh’s a team that forces you to do that. They play fast, they’ve got extremely dangerous offensive players. I think they lead the league – they’re first, second or third in every offensive category you can find, and if you make mistakes, they usually capitalize, and if you’re undisciplined, they make you play. It’s a really good opponent. The two-time Stanley Cup champions. They are the measuring stick in the league, and we’ve got to be on top of our game. But, regardless, if we’re not playing Pittsburgh, there’s no easy games in the league. It doesn’t matter who you’re playing. You’ve got Anaheim tomorrow. You’ve got the Rangers coming in here. There’s all really good teams in the league, and we’re trying to put the focus on our team and make sure that our game’s in order regardless of who we’re playing.

On the match-up between the top power play and the top penalty kill:
Our best penalty kill tonight will be staying out of the box, clearly. I think they’ve scored 45 power play goals this year, and they get chances. Your goalie has to make saves. You have to be committed in lanes. You have to try and limit their time in the zone with faceoffs and doing the job on the rush now. Their power play rush game is very good. They scored two goals on the rush last night, so they can beat you in a lot of different ways and they’ve got two units that can be effective. So, we’ll focus on having really good fundamentals and a sense of urgency when we’re in that situation, but it’s clearly not a situation you want to put them on numerous times.

On whether the approach will be to take care of the defensive end first, and everything else will follow:
I think it’s been our philosophy for a long time here. Nothing’s changed this year. We’ve tried to improve certain areas of our games offensively, whether it be rush play or O-zone play, power play, your offensive game, your attack game. But, for us, if you’re going to win hockey games, you’ve got to keep the puck out of your net and you’ve got to limit opportunities. We’ve got a great goalie in Jon Quick. Our best offensive players are our most committed defensive players, and that’s always been the root of success here.

On whether he pays much attention to the standings at this point of the season:
You have to. It’s why we play. But, the one thing we talked about with our group is there’s no sense in watching what teams are doing around you. You need to take care of yourself. You’re not getting into the playoffs with 53 points. We know that, so we’ve got to get points on the board. We don’t want to be in a situation where we need help somewhere else. We need help ourselves. Our two points are the most important two points. The standings are critical. Where you are in the standings is critical. It’s why we play the game. We want to be as high as we can in the division, but the most important spot in the standings is where the Los Angeles Kings are. [Reporter: I guess what I was getting at was the fact that there’s a bunch of teams bunched together now in the west – does that get your attention as to how tight this race is going to be?] The only thing that’s changed for me is we used to talk about four-point games in the division. I think they’re all four-point games in the conference now. It doesn’t matter. You play your conference teams three times, you play your division teams four teams, with the exception of Anaheim, who you play five. You’re still playing the Western Conference teams three times, and it’s a split – either one at home, two away, or vice versa, where the division’s two-and-two. But to me, you want to finish top-three in the division. That’s where you want to finish. But the conference games, they’re not as important, but they’re pretty close.