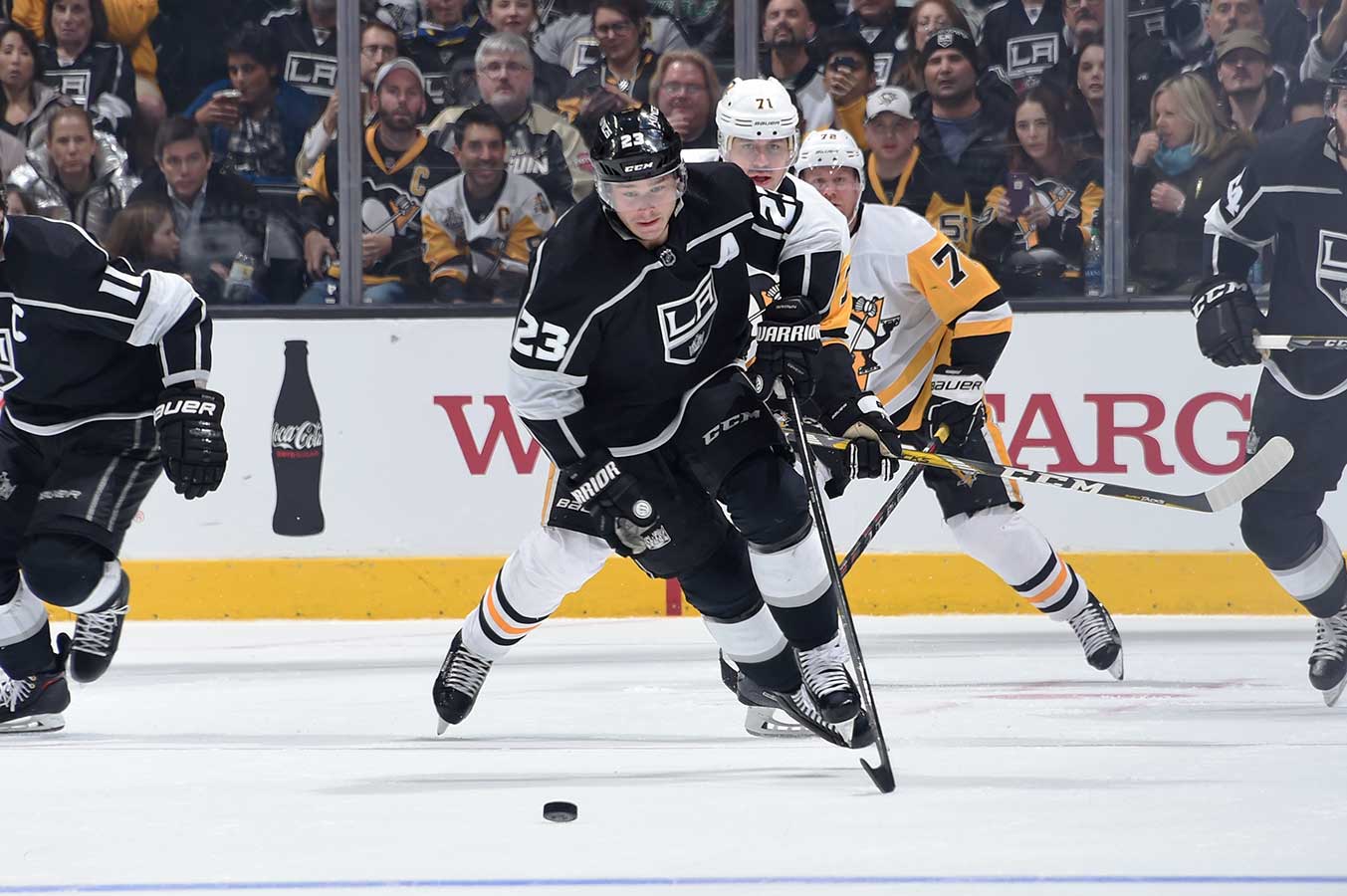 Dustin Brown, on if he thought the game misconduct for his hit on Justin Schultz was too severe:
I’m going to close on him. He stumbles, toe picks. I don’t drive him into the wall or anything. Also, closing on the play, at the most it’s probably a two, I think. I mean, who knows because of the protocol and all that, but it’s one of those plays where I’m going to close and he’s in an unfortunate spot.

Brown, on whether Schultz stumbled:
Yeah, well he’s on his knees. I definitely hit him when he’s on his knees, but I’m also going, closing on him. He falls as I’m approaching him so it’s not like it’s one of those plays where it’s–I’m surprised it was a five, but I know he didn’t come back into the game either.

Brown, on whether he was surprised at getting a game misconduct:
I don’t know what that means really. I don’t know how all those rules work really. That I was out of the game. I’ve seen a lot worse.

Brown, on if the team was playing their game up until that point:
Well, in the second we could’ve been better. We obviously didn’t start the third the way we wanted to. We had really good looks. I thought we made them come through us, but we gave up a lot in the neutral zone and they have a lot of good players that can make a lot happen. If you give them time and space coming through the neutral zone, I think they had a couple really good looks and Quickie made some really big saves. But we’ve got to be better.

Brown, on how frustrated the team is right now:
It’s definitely there. If you’re not frustrated there’s something wrong with you. But just trying to channel that frustration into positive energy that you can use to win games because it’s going to be hard. There’s going to be ups and downs and you’ve got to find a way to dig yourself out.

Brown, on how the team turned their losing streak around earlier in the season:
It’s much the same. Like I said, I don’t know where we sit now. We were in second and we dropped down to eighth. Coming into tonight, I don’t know what happened around the league, where it goes. But you have to just remind yourself of that. You’re still in a good spot. You’re still in a playoff spot and it’s important for us to realize that. And kind of turn the corner. It’s been tough. It’s been frustrating. But you lose five straight, especially in the situation we’re in. But we’re not–we’re in the playoffs still. It’s one of those things where you have to realize where you are. It’s been hard. It’s been brutal for us. Frustrating, but at the end of the day we’re still fighting for a spot and these next 35 games, plenty of time.

Drew Doughty, on whether frustration is starting to set in for the team:
Yeah, you know we’re obviously pretty down on ourselves right now. You know, we want to turn it around as soon as we possibly can and that’ll start tomorrow night. At times I thought we deserved better tonight and could’ve won that game, but obviously we didn’t. And you know, there’s not things we need to blame it on. I think individually, we just all need to pick it up in here and we’ll come together and win a hockey game.

Doughty, on whether killing the five minute major was almost to much to ask at that point in the third:
Basically, yeah. Well, no. We can kill off a five-minute major no problem. It was the two penalties after that that, not that I agree or disagree with the calls, but those two calls after completely screwed us because we couldn’t get the puck back from them and create an offensive chance and have the opportunity to pull our goalie.

Doughty, on whether the team played the way they wanted to in the first two periods:
There’s times in the second that I felt like we didn’t play our game and they kind of took it to us. They had a maybe five minute span where they were in our zone for a long time–not that they were creating amazing chances or anything. I know Quickie made one really big save, but they were just hemming us in our zone and making us tired and when you don’t have the energy to go play in the offensive zone, you’re not going to have the energy to go score any goals.

Doughty, on whether it will be a tough turnaround to play the Ducks tomorrow night:
Oh we’ll be fine. We’ll be ready to go. People think that playing on the back-to-back is a disadvantage, but at times it’s not. You know, tonight we go home. We’ve already got another game to think about so we won’t dwell on this one. Just go to sleep, get up in the morning, go to the rink, and head over to Anaheim. So I think it’ll be an advantage for us not to think about the position we’re in and just think about the game ahead.