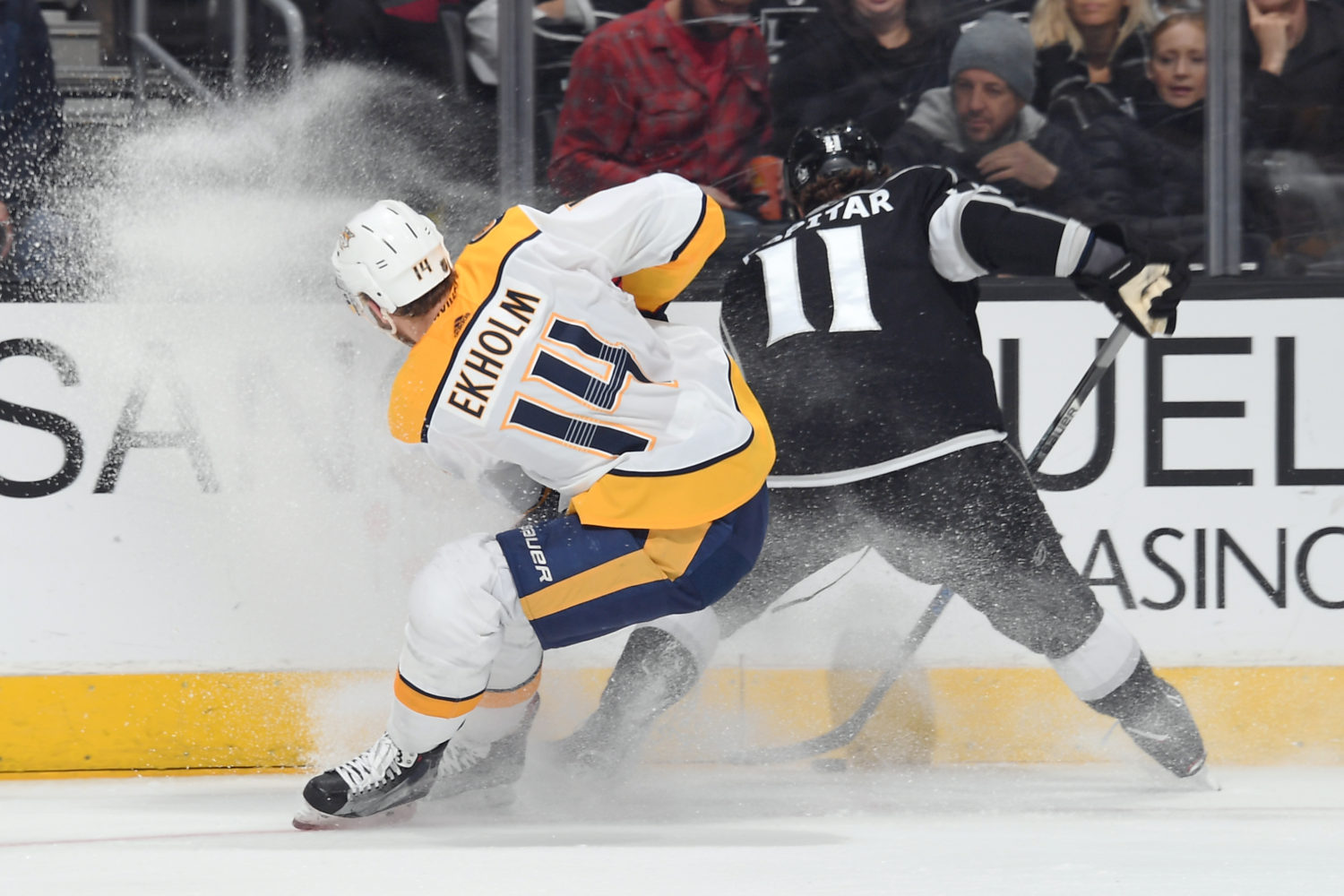 Laviolette, on managing the pushback by the Kings in the third period:
Well they’re not going to go away. They’re a good hockey team. There’s a reason why they sit where they sit in the standings and we knew that. But I think when they scored that goal, we came right back and scored another one and I think that was real important. I thought the guys competed really hard in the last eight to ten minutes of the game.

Laviolette, on the number of shots on goal not being very high:
Well neither were theirs until the end. So I mean, it was tight. I think it was 24-20 or 24-22. Whatever it was, it was three or four difference, shots difference. There wasn’t any room out there. They got a few at the end when they pulled the goalie, but I thought it was just a tight game.

Laviolette, on what made the difference in such a tight game:
Well the power play I thought helped out. I thought the response, once they scored in the third period, for us to score a goal right after that I thought was really important.

Roman Josi, on getting the two points:
Great. Huge win for us, definitely, against a really good team. I thought we played a good game. Back and forth probably a little bit, but it feels good to get the win.

Josi, on the Kings stepping on the gas in the third period:
Yeah, I mean you saw it last time we were in here. They came back on us too. And we knew they were going to have a push after we were up three-one. And yeah, they did. We did a good job responding with that huge goal, scoring 4-2. And yeah, Pekks (Pekka Rinne) was great in there.

Josi, on whether the team got an emotional boost from Austin Watson’s goals:
Yeah, definitely. I mean he’s one of those guys where you’d do anything for your teammates. I mean I’ve never seen a guy blocking shots like he does. He’s so valuable for the team and does so much for the team that a lot of people don’t see, so everybody was really happy on the bench when he scored two, for sure.

Austin Watson, on how it feels to get the win:
Yeah, it was good the way it ended. I thought we, for the most part, played a really solid road-game tonight. We tried to keep it simple. You know, we let them come back there a little bit in the third period, but we got great goaltending as we always do and we were able to close it out tonight.

Watson, on his second goal:
I think we all know the way the Arizona game ended wasn’t particularly good for me and something that I wasn’t very happy with. So to come out here and help be a factor in getting this win here tonight and kind of helping our team bounce back and get the two points that we needed, it was important for me to do and it was a great game all around for us.

Watson, on preventing the Kings from tying it up late in the third period:
When we put our minds to it, I think we’re a tough team to play against. And kudos to them over there. They’re a really good veteran team. A lot of great players and you know, they’ve been there and done it. They’ve won Stanley Cups and know how to win hockey games. We knew they weren’t going to stop pushing so we knew we were going to have to be ready in the third period.

Watson, on how difficult it is to score goals against the Kings:
I mean for my career I think it’s hard for me to score goals, but particularly against this team. They’re a big, physical hockey team ad there’s not a lot of space out there. So for us to get four and get the win is huge.

Watson, on what he read on the plays that led to his goals:
Well, the first was an unbelievable play by Subban. I think he faked the whole ice surface out with the fake shot and fortunately I was paying attention. Second one was just a really good shot by Ryan Ellis, getting it through. And you know, just trying to provide some traffic in front of the net and got a stick on it.