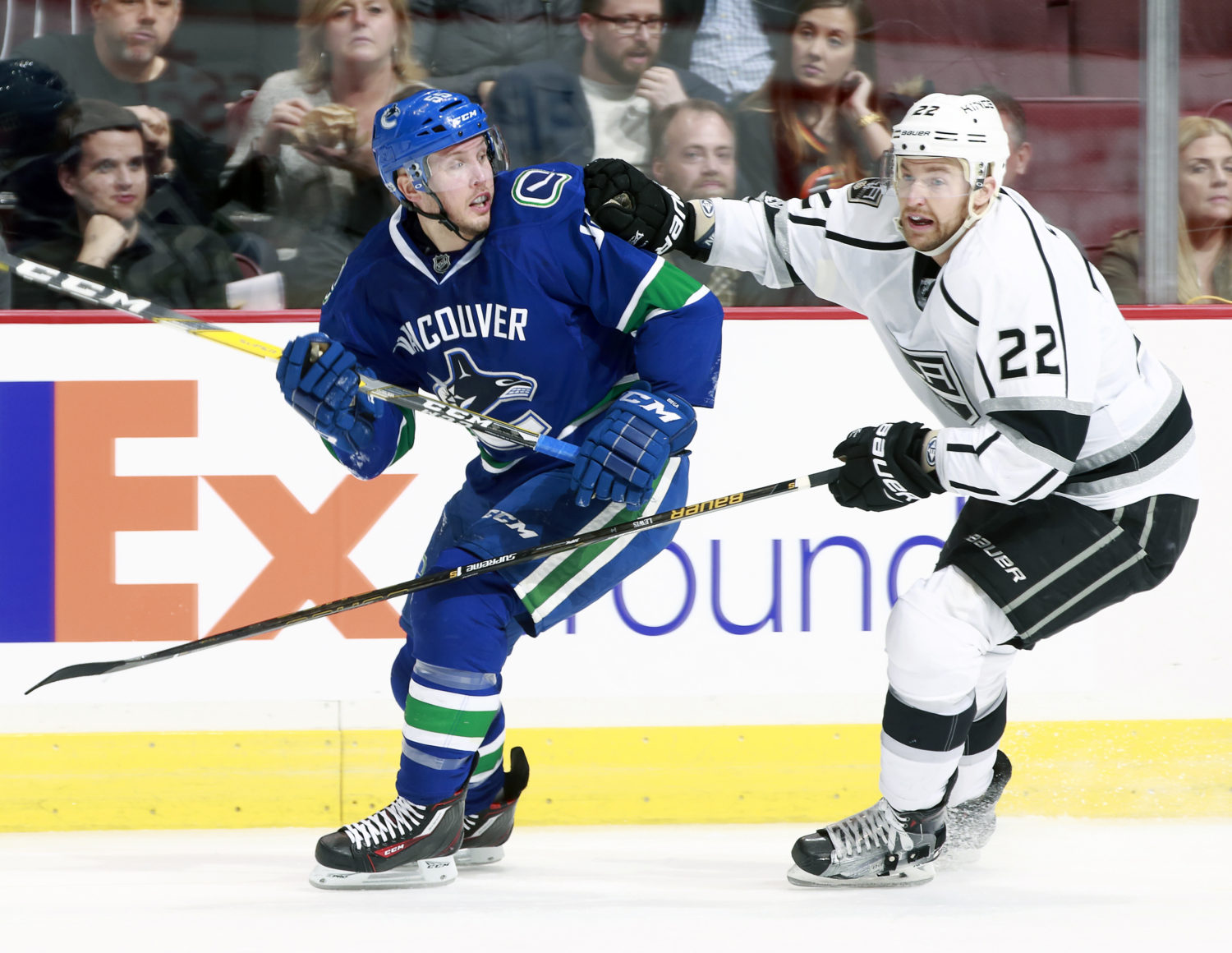 Good afternoon to you from Vancouver, Insiders. The Kings skated on the Rogers Center ice at 11:30 a.m. in advance of tonight’s game against the Canucks (7:00 p.m. PT / FOX Sports West / FOX Sports GO / FUBO TV / KABC 790 / I Heart Radio) and showed the following alignment:

-The vitals: Andy Andreoff, Oscar Fanternberg and Jonny Brodzinski remained on the ice for some extra work and are likely out tonight. Jonathan Quick, who is 16-15-2 with a 1.66 goals-against average, .938 save percentage and four shutouts in his career against Vancouver, was the first goaltender off the ice and is expected to start.

-Their vitals: Christopher Tanev (groin), Brandon Sutter (lower-body), Sven Baertschi (fractured jaw) and Bo Horvat (foot fracture) are all on injured reserve. Derek Dorsett chose to end his playing career late last month due to health concerns in the wake of last season’s neck surgery. The Canucks didn’t hold a full-team morning skate this morning, but could align as D. Sedin-H. Sedin-Eriksson, Vanek-Gagner-Boeser, Goldobin-Granlund-Virtanen and Gaunce-Dowd-Chaput with defensive pairings of Edler-Stecher, Del Zotto-Pouliot and Hutton-Gudbranson. Jacob Markstrom, who is 0-2-2 with a 3.16 goals-against average and a .906 save percentage in his career against Los Angeles, is expected to start in net.

-The Kings are 3-4-3 against the Pacific Division. They’ve beaten the Ducks in overtime and in a shootout, and beat the Sharks 4-1 in the second game of the season. Combined with last season’s record, they’re 15-18-6 against the Pacific since the start of 2016-17. What’s the deal here?

“I think we for the most part, we’ve had good starts in [Pacific Division games],” Jake Muzzin said. “We get to an early lead, or we’re playing well, and we get away from our game. For some reason, when we’re having success we want to change it up or try something else, but these are games we have to play like Kings hockey for 60 minutes to get the win. We’re going to have to tonight.”

His observation that the team has had good starts but got away from their game certainly was an accurate depiction of the last time Los Angeles and Vancouver met, a 3-2 Canucks win at Staples Center on November 14 in which the Kings led 2-0 3:14 in but surrendered the lead in the second period and lost the game on a Sven Baertschi power play goal in the third.

Their struggles against the Pacific do not bleed into other divisions. Though they have a .462 points percentage against divisional teams since the start of 2016-17, they’re operating at .643 against the Central (16-8-4), .554 against the Atlantic (15-12-1) and .646 against the Metropolitan (15-8-1) over that span. Los Angeles did not qualify for the playoffs last season but is seven points clear of the playoff precipice heading into tonight’s bout.

“If you look at Vegas, they’re way out in front, and I think [they have] one loss this year in the division, so it really is going to dictate where you finish,” John Stevens said. “You want to be top-three in the division. They’re big games. We know how important they are in terms of where you end up in the standings, and there seems to be a style of play that’s present in the Pacific Division, so they’re tough games, they’re emotional games.”

Is there a style of play in the Pacific that has remained constant? Los Angeles, Anaheim and San Jose are similarly heavy teams that have, at times, utilized their size and possession advantages, and Edmonton took a major step forward last year towards committed checking and defensive responsibility. But with eight teams in the circuit, is it possible to apply a label to the type of hockey played out west?

“I think it’s more physical,” Alec Martinez said, and he’s definitely not alone in thinking that, even with the added emphasis across the sport on speed and pace. “I think it’s more of a puck possession game. I think the West has gone a little bit more to developing offense off the rush as of late, but I would say that the East is more up and down and almost like trading chances up and down the ice rather than the West.”

Does he see any sort of differences between the styles generally employed between the Pacific and Central Divisions?

“Maybe a little bit, but not really. If you plant St. Louis in the Pacific Division, I mean, we play pretty similar,” he said before noting that the Kings haven’t run through a full Central Division gauntlet and are yet to face Dallas this season. “…I would say there’s probably a couple outliers, but it’s relatively consistent within the Western Conference.”

-The last time Kevin Gravel played against Nic Dowd was in the USHL, when Gravel played for Sioux City and Dowd for Indiana in 2009-10. Since then, they spent four years together at St. Cloud State, where they were roommates, before joining AHL-Manchester late in the 2013-14 season. They were both key figures on the Monarchs’ 2015 Calder Cup-winning team, with Gravel assisting on Dowd’s Game 2 overtime game-winner in the five-game series victory over the Utica Comets, Vancouver’s top affiliate.

“Obviously we’re very close,” Gravel said. “I’ve lived with him for four years, so yeah, anytime you can go up and battle against your friends, obviously bragging rights are on the line. And, we need a big win too, so it’ll be a fun one tonight.”

Acquired from the Kings for defensive prospect Jordan Subban – who has two goals, three points and a plus-three rating in his first four games with AHL-Ontario – Dowd is adjusting to life north of the border and has been happy with his first month wearing the Orca.

“From a team perspective, the guys have been awesome, super welcoming, and from an organizational perspective as well it’s been great too,” Dowd said. He also cited the minor differences in changing organizations for the first time in his pro career – for instance, what time is breakfast served in team areas? – but noted that there were also details of joining a new team that were notably smooth, such as the fact that Kings Head Equipment Manager Darren Granger worked under Canucks Head Equipment Manager Pat O’Neill for 13 seasons, and both operate under similar structures and practices.

It was a jarring move, though, especially for someone who was drafted in 2009, developed under the club’s watch and emerged as an intriguing center who had success in college and the AHL and often showed good playmaking ability in the NHL, where he’ll play his 100th game tonight.

“I think playing in those types of games, whether it’s in the NHL or in the American League, is critical for your development,” Dowd said. “I think that a coach like Mike Stothers was really beneficial for me, and I think playing in those tough playoff games is just another thing you can add to your repertoire and something that guys, if you haven’t done it before, it is challenging.”

He hasn’t yet registered a point through eight games with the Canucks but has been seeing penalty killing time and has played between 14 and a half and 17 and a half minutes over his last four outings.

It’s a good marriage between a player and a team that has seen its center depth depleted with injuries to Brandon Sutter and Bo Horvat, even though it comes at a “bittersweet” conclusion to years of developing play, developing relationships and growing into a man during his Los Angeles tenure.

“This happens to a lot of other guys around the league, guys that have been with teams far longer than I have, [which was] just a year and a bit,” he said. “So, I don’t think it’s going to be any more difficult [playing against Los Angeles] than playing any other NHL team. LA’s really – obviously I know first-hand – really, really well-coached and a really good organization.”

“I was excited to get somewhere where I could actually play. I sat almost half the games in L.A. and I wasn’t playing a lot of minutes, so that’s challenging as a hockey player. You want to help your team, and I felt like hadn’t been doing that, but coming to Vancouver, I’ve been put in a situation to succeed.”

-John Stevens, on Nic Dowd: “Great kid. He went through the process, went to the minors, became a really good player down there, won a championship there and made the step to the National Hockey League, so we loved having him in the organization. Really good kid, works hard, a good teammate, and he was a good kid to have around.”

Great to catch up with Nic Dowd, who is expected to play in his 100th NHL game tonight.