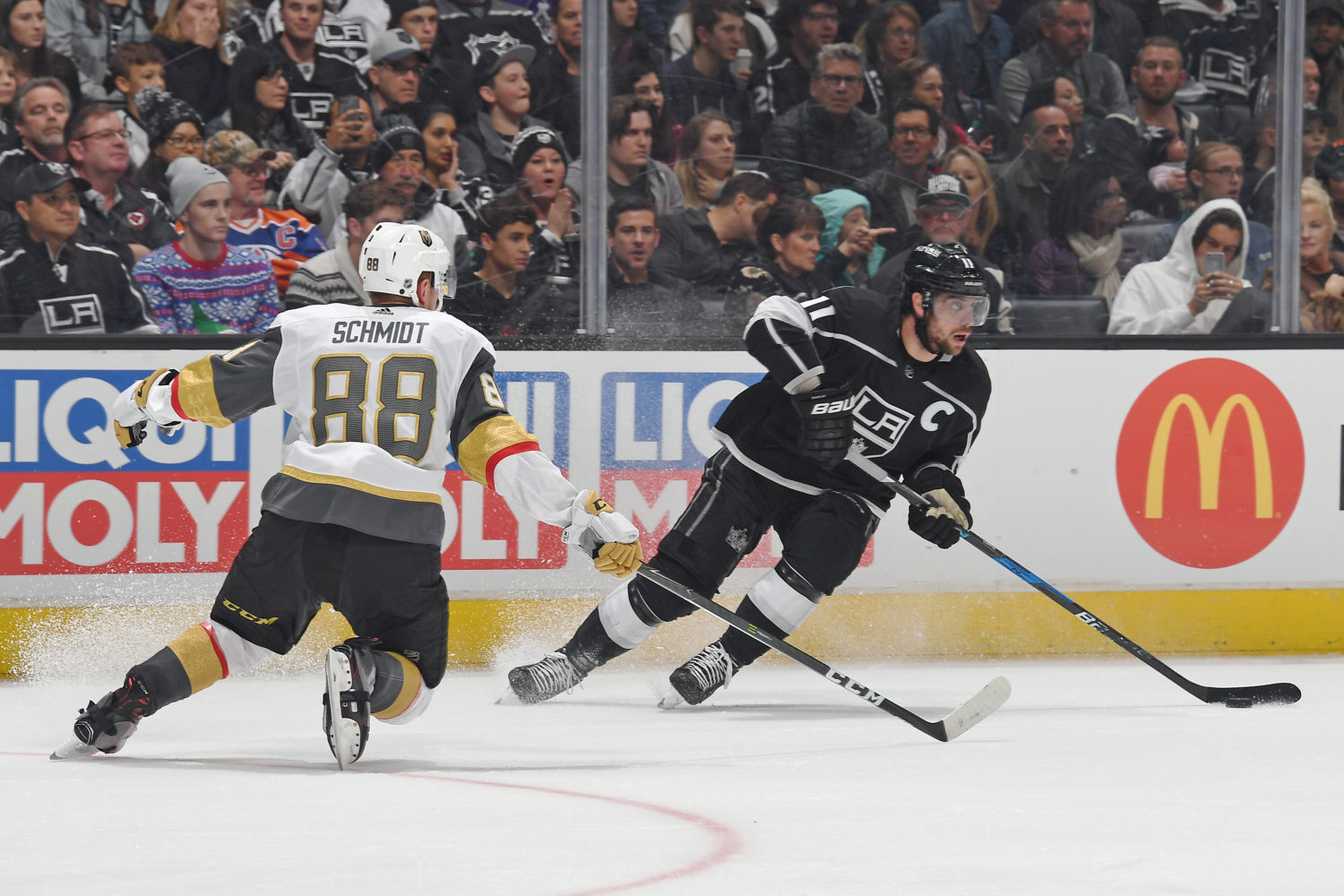 On players indicating they took many penalties and had to rely too much on Jonathan Quick:
My take is that we had a good start to the hockey game. I thought we had a good first period, and then we totally went off track. Probably my most disappointing game this year in terms of not trying to establish a game plan. A lot of east-west plays. A lot of frustration towards referees instead of at ourselves. We spent too much time in our zone from the end of the first period on just because of the mismanagement of the puck. There’s going to be mistakes in the game of hockey. The attention to play the game the right way wasn’t there, especially in the second period, a team that played last night. We started chasing the game a little bit, so it’s disappointing.

On whether the defense had a chance to make a play on Vegas’ second goal:
Well, it went to the winger on the wall, too, right? Put pucks in deep, you force teams to execute through your checking. Pucks turn over and opportunities are created. Credit to them, and something we’ve got to learn from.

On earning a point from the overtime loss:
Probably got a point we shouldn’t have had, to be honest with you, so we can be thankful for that, but let’s not pat ourselves on the back here. It’s a disappoint effort tonight – the effort wasn’t disappointing. The intention to play the game the right way was disappointing. [Reporter: Execution?] You’re going to make mistakes in the game of hockey. You show up, you do your preparation and get ready to compete, but your intention to do the right thing, even when you intend to do the right thing, it doesn’t work out that way. We’ll live with that, right? But if you don’t intend to do the right thing, we want to turn the puck over all night, especially in the second period. You don’t generate shots, you spend too much time in your zone, you lose hockey games. [Reporter: Is that from their pressure?] They’re a good hockey team. They check very well, they skate very well, their five-man game is as good as anyone. But I think a lot of it was self-inflicted.

On Marc-Andre Fleury making big saves in overtime:
Yeah, he’s a good goalie. Our goalie, again, gave us a chance. Probably a big reason we got a point tonight. But he’s won Cups before, too. He’s a pretty good goalie.

On what led to Jonathan Quick’s unsportsmanlike conduct penalty at the end of the second period:
I’m not sure yet. Something happened there. We looked at the sheet. The sheet we got never had a penalty on it. We didn’t really have much time to get into any kind of explanation of what happened there. I heard that might be a penalty there and checked the sheet. Up until we went out, there was no penalty listed on the intermission sheet, and then obviously there was penalty. A penalty, and then a five-on-three, and then a penalty, so not a recipe for success. [Reporter: How did you learn there was going to be a penalty there?] We heard something that might’ve happened at the end of the period, so we kept checking the sheet, but the sheet never indicated – I’m not sure why. I would think by the end of the period, but it didn’t. At the end of the day, there was a penalty called. We had a suspicion that there might be, even though it wasn’t on the sheet, but I’m not sure yet.

On an effective penalty kill that was relied upon heavily:
It kills your top guys, it’s very taxing. Kopi’s a big part of it. He’s a lefthanded centerman that takes a lot of draws. He and Brownie both play a lot of hard minutes there. Five-on-three, hard minutes. So, yeah, it’s never a good thing. They’ve got a good power play. They get momentum from it. Even when they don’t score, they get momentum from it. It’s taxing on top guys when you get in the box that much, and it’s taxing on guys when you’re in there as much as we were in the second period.

On whether Alex Iafallo was hurt, given that he played his final shift in the second period:
He’s not hurt.