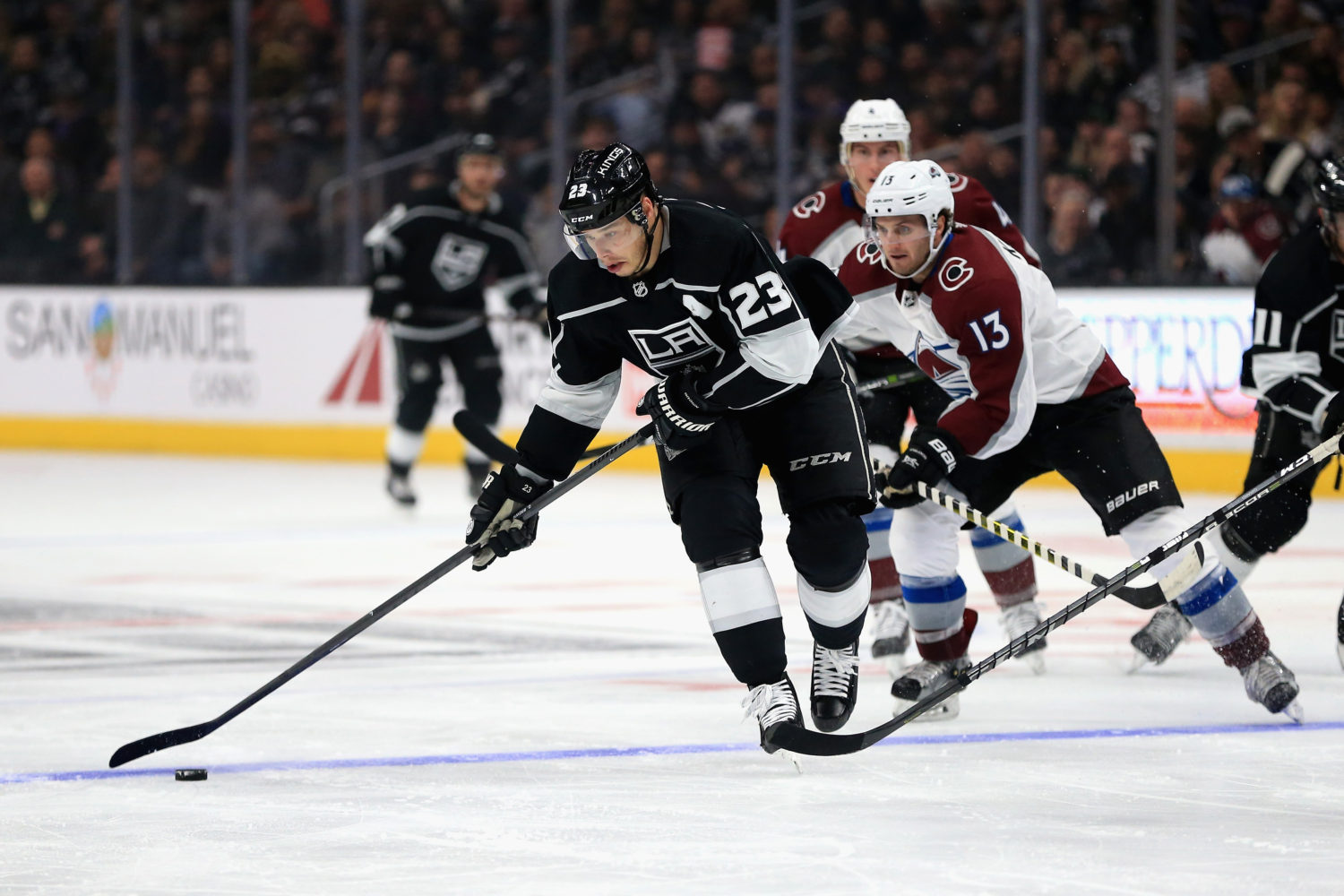 On why the team has found success when playing from behind:
That’s a good question. I think in hockey, statistically, they’ll tell you that’s not a good habit to get into. It was kind of a tight game all around. I don’t think there was a lot going on [with] either team, especially early. You got the goal in the second period there. I think when you play from behind you’re forced to chase the game a little bit. I would say on the positive side of that, I think sometimes when an event like that happens in a hockey game early, I think it affects teams too much in terms of the feeling that it’s going to dictate the outcome of the game. I think we’ve tried to instill in our guys that if you do the right things over a 60-minute hockey game, the right result usually corresponds with that, but I do think we have a group of players in there that have been down that road before that have played in tight games and an ability to come from behind, and I think the fact that one goal didn’t turn into two goals, that’s big. And we have had to come back from more than one, but when you’re a goal down, I mean, you’ve only given up one goal in the hockey game. You’re not going to win by not scoring. I think last night in that case, we just had to bear down a little bit, and try and get a few more stops in the offensive zone. We had to get a puck in the net to try to get back even, so it was only one goal. It was a little bit of a different animal last night.

On Torrey Mitchell having persevered in the NHL for a long time:
Well, he’s a good veteran player. I don’t think you can have enough good veteran players. Jokinen came on board, same thing. Really smart, good on faceoffs, brings a lot of experience to the locker room. He’s really helped those young guys. I think he helps them in practice, he helps them when he plays, he’s a utility guy that can move around. I think when you have young guys on the fourth line – Brodzinski there, and Andy, I wouldn’t call him young, but he’s a guy who doesn’t have a wealth of experience. When you have a guy that has more experience in games, I think it’s really good for those young guys, and I think that gives stability. We’ve been fortunate. We have Alex with Kopi and Brownie, so you have a couple veteran guys. You have Ty and Tanner with Juice. …With Gabby, they certainly have a lot of experience, and then you’ve got Shoresy and Lewie there that can put anybody with those guys if you move Alex down. And if you go down there, now you’ve got Jokinen and Mitchell who have played with Brodzinski. A variety of different people there, Andreoff. I think those veteran guys, and the ability to spread ‘em around with our young guys, has really helped us.

On the team’s pros and cons in advance of the Christmas break:
There’s lots to like about our team. We’re really excited about the ownership that the leadership group’s taken with our hockey team. I think they deserve a lot of credit for the success we’ve had this year. There’s been lots of adversity we’ve had to battle through, some with injury with Carter going out for an extended period of time, Cliffy going out for an extended period of time, Marty started on the shelf for three games. But I think the guys that have been around, they have been our best players, and I think that’s allowed our young guys to really take some responsibility. I think that part of it’s been really good. I think our team game has continued to improve in terms of the way we want to play, some of the changes we want to make. We do think we’re starting to play faster. We have scored more five-on-five. We’ve got some secondary scoring that wasn’t there last year, so we’re not just counting on one or two guys to score for us. There’s obviously lots to improve on. I think our penalty kill, which was really good for a long stretch of time, has fallen off. Our power play has scored some big goals at key times, but we’d like to see the consistency there and probably a little more production out of our power play, and just our overall team game we’d like to see continually evolve. [Reporter: I was just talking to Drew about that. He talked about consistency overall, and also about turnovers as key areas that you guys want to work on. What are your thoughts about that?] I think you’ve always got to manage the puck, and the challenge with a team that’s trying to score more, I think we caught ourselves a little bit. The energy flows where the focus goes, so if you’re focusing on scoring more, sometimes there’s other parts of your game that slip, and we’ve really cautioned ourselves knowing that we have to have success, and there has to be a recognition of an opportunity to make play that’s a support play, or an opportunity to get a puck in behind with speed that’s maybe not a sexy play to make but is really an effective play for the hockey team. I think that’s a process that takes time. I think there’ve been times when we’ve been really good at it, and I think there’s times when we could be better at it.

On keys to improving the power play:
Probably the number one key is just execution. I think simplifying a little bit in execution. I think at times we’ve been guilty of not wanting to shoot the puck unless we think we can shoot it to score, as opposed to shooting the puck at the net to create. I think that’s a mindset that’s starting to change, but i think to continue to go there, sometimes guys are reluctant to shoot because they don’t think when they shoot that shot’s going to score as opposed to if you shoot what that shot’s going to create with people, where they are, and numbers going to the net. I’d like to see our overall execution improve, but I’d like to see our mindset change a little more to volume, as opposed to one shot, one kill. [Reporter: You guys haven’t gotten a lot of power play opportunities lately, I think.] No, we haven’t, and we looked at that. The last five-game segment, I think it was 18 kills versus nine power plays. But I do think there are some games where you don’t attack enough, you don’t spend enough time in the offensive zone, you’re not driving off walls. I think we’ve done that. We’re not going to be a team that blames the referee for not getting those situations. I think we’re going to be a team that looks at ourselves and says, ‘OK, what can we do to create more of those?’ There are situations where we have maybe a little bit of daylight to drive off a wall, or do we have an opportunity to challenge a defenseman on the rush, can we put more pucks to the net with traffic there – is that going to create more of those opportunities? Usually, when you spend time in the offensive zone is where you draw penalties. I think we’ve been guilty a little bit in that stretch where we’ve taken some offensive zone penalties ourselves, some stick infraction penalties. Those are stuff we’d like to clean up, but In the sense of drawing penalties, it usually comes from an aggressive, attacking mindset that forces teams to defend.

-One quote on Torrey Mitchell, and one quote on the penalty kill were withheld for today’s practice report.
-Lead photo via Sean M. Haffey/Getty Images