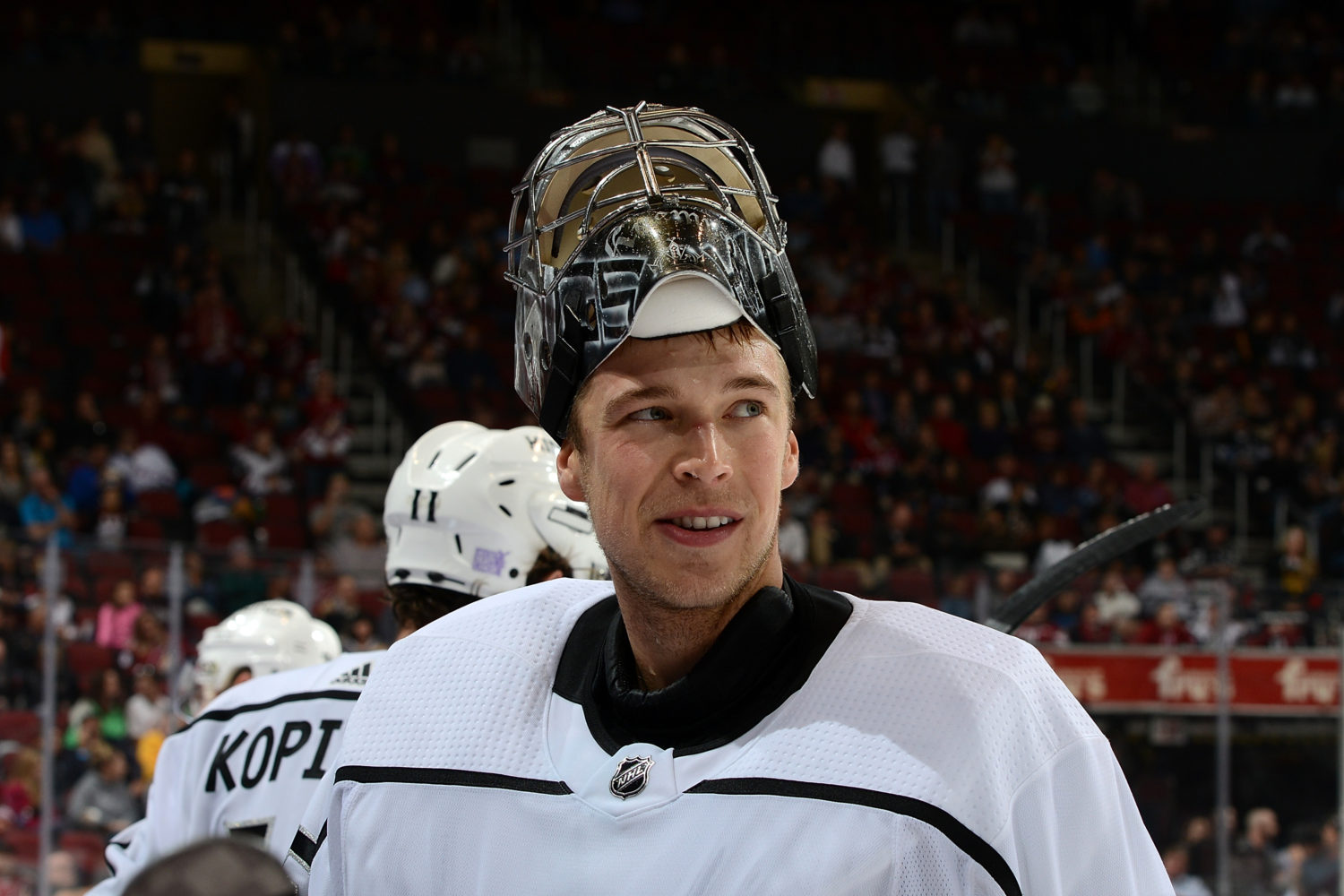 On any point prior to the season that foretold Anze Kopitar’s impressive bounce-back:
I don’t know if there was appoint where the light bulb went off. I mean, I’ve seen Kopi play at a really high level. He was probably the one guy that I thought if there’s a guy that can get his game back, it’s him, and we felt very optimistic about him throughout the summer – just the way he was approaching his summer. Every time you talked to him – Matt Price went over and spent a week with him. He came back here at a point in the summer. All indications were that his preparation over the summer was going to put him in a position where he could be a really good player, and what we were hoping to see was what we saw from day one. He was a good player the first day on the ice, he was a good player every day in training camp. He and Brownie haven’t skipped a beat. They seemed like their game was back in order – great chemistry right out of the get-go. So, we’ve been kind of optimistic about him from the summer on. I don’t think there’s any one point where we said, ‘that’s him.’ Obviously, he’s produced at a really good rate for us, but his quality of play has been there from day one.

On the biggest influence in cutting down shots and chances against:
One, it’s a commitment to be there and wanting to do it, and it’s just getting five people back quickly and being in the right posture and starting point. I think we’ve done a really good job at getting people back inside first and then closing quickly. I think earlier in the year we were a little bit guilty of coming maybe back a little too wide, but I think we were doing a better and better job of getting the dangerous ice taken care of quickly on entries, which starts with your rush coverage, and then quickly fanning out from there. So, I just think our initial starting point with our coverage has been very good.

On Darcy Kuemper:
He’s been terrific going back to training camp, but I think he’s done a really good job of just getting ready to play. If you look at the situation, maybe one game this year where he looked a little off. But he’s been outstanding. It’s what you want from your back-up goalie is when he’s asked to come in and play – and a lot of times they’re tough situations. Billy and I talk, and Darcy knows ahead of time when he’s going. He does a really good job of focusing and really getting ready to play, and then he needs to be ready to come off the bench. If you look at the game in Vegas, Jonny went in and got pulled early, and he came in and gave us a chance to get a point in the hockey game. He’s been really good. He’s been really focused. He’s really worked hard at his game, and I know he’s gained the confidence of the team and the staff. [Reporter: Tempted to use him tomorrow against his old team?] We’ve actually looked at the schedule. We’ve talked about it. It’d certainly be an option, but that wouldn’t be the determining factor, just because it was Minnesota.

On Dustin Brown and Marian Gaborik approaching 1,000 games played:
It’s impressive. And not only that, at that point, approaching 1,000 games, they’re still very productive players. It’s an admirable thing in my opinion. If you look at a guy like Brownie, he plays the game extremely hard, he plays every night, he’s up around the 80, 82-game mark every year and plays as hard as anybody in the league. Gabby’s battled through a lot of injuries and really takes great pride in his fitness and training and being prepared and is a very elite trained athlete, and I think when you have an older player that’s well trained, he gives himself a chance to be a good player approaching that mark in his career of 1,000 games.

On any concern that puck management will be an issue going forward:
It’s always going to be a concern. I don’t think it’s an issue at all. We always want to try and manage the puck. I thought Kopi’s line, in particular, part of it, the fact that they’re trying to take the game on themselves and they felt like if we could get the first goal in the hockey game, it’d really make a difference, so I think every time they had the puck they were trying to score as opposed to just trusting the team game a little bit. That team checks very well. They skate pucks off your stick really well, and I think the right play a lot of times is to get pucks in behind them, but that’s a process that over time we hope we get better and better at – recognition when there’s an opportunity to make a play on the rush, and recognition when [inaudible].

On Christian Folin’s ability to make an impact despite not being an “every-day player”:
Well, we hope that he wants to be an every-day player. We’ve tried to take advantage of healthy people with the schedule the way it is and get guys in and out to give us fresh legs, but he’s done a good job of getting better each game. When he doesn’t play, he comes back and is a better player even though he may have missed a game, but I think he has a good understanding of his identity. He’s a good, physical, hard-to-play-against defender, and he makes simple decisions with the puck. He’s got good skills. He skates well, he’s well trained, he moves the puck well, first-pass, he can kill penalties and he can defend against top guuys, so he gives us some real quality minutes, especially when you’re on the road.

On Jussi Jokinen’s play leading to Kopitar’s empty-netter, and whether it’s indicative of anything:
Well, there’s a few things there. I think he’s a good penalty killer, he’s a really smart player, positions himself well and has got a lot of composure when he gets the puck and he also gives you another faceoff guy that you get in a situation where a puck’s iced. He’s very good in the faceoff circle, and I just think he thinks the game really well and has got a lot of experience and usually makes the right play at the right time in those situations.