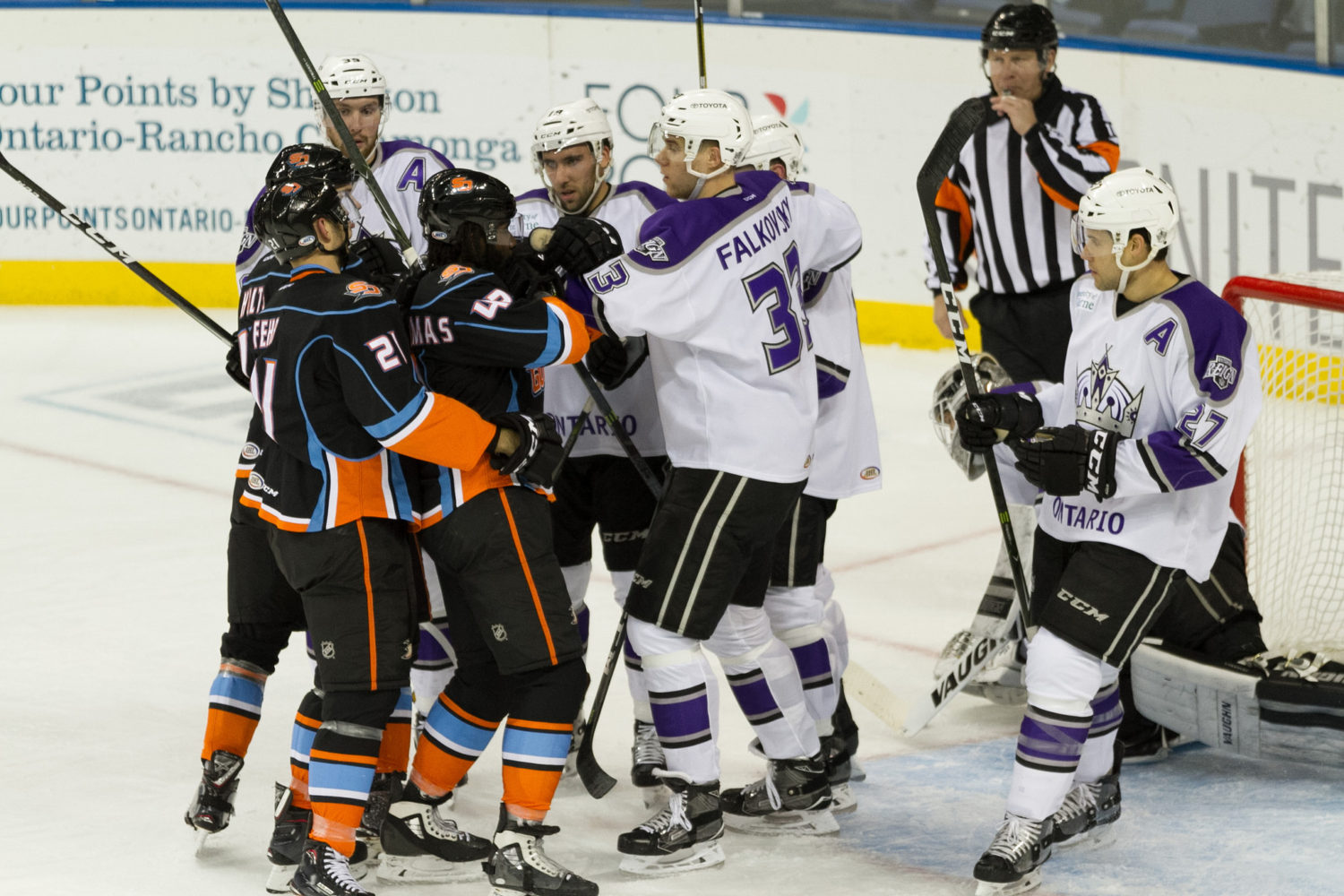 2nd Period:
– Puck is down for the 2nd period. 0-0 contest between ONT and SD.
– Good 1st shift for SD. Bouncing pucks in on Petersen.
– ONT Goal: Falkovsky’s shot goes off the glove of Berra from a distance and trickles into the net. Berra wants it back. 1-0 ONT early in the 2nd period.
SD Goal: Scott Sabourin sneaks around the ONT defense and places shot over glove of Petersen from right circle. 1-1 with 14:42 left in 2nd period.
– Penalties handed out for both sides. ONT-Imama and SD-Jordan Samuels-Thomas grab unsportsmanlike conducts. 13+ left in 2nd period. 1-1 game.
– ONT creates pair of odd-man rushes, but come away empty handed. Devane and Auger led their lines, but passes in skates & swatted away. 1-1 with 8:39 left in 2nd period.
– Strong offensive continue to build up for ONT. Doubling SD in shots 12-6 so far in 2nd period. 1-1 with 8:02 left.
– SD Penalty: Fiore flagged for elbowing at 11:58. 1st PP for ONT tonight.
– ONT worked extensively on PP during practice this week. Just 1 home PP goal this season. 7 total on the year (last in AHL)
– ONT firing from points into plenty of traffic, but all looks blocked/sent wide. PP comes to a close. 1-1 with 6:03 left in 2nd period.
– ONT controlling the pace. Now 17 shots on goal, but Berra coming up with timely saves. 1-1 with 1:40 left in 2nd period.
– 2nd period comes to a close. Falkovsky collects for ONT. Sabourin for . 1-1 contest at CBBA.

1st Period:
– ONT Penalty: Lintuniemi takes an interference call early in the contest. SD boasts best PP in AHL at 24%
– Good puck movement by SD on this opening. Petersen holds tight on distant shot by Welinski. 16:32 left in 1st. 0-0
– Jonathan Racine draws into the lineup for the first time this season for @ontarioreign and drops the gloves with SD’s Ryan White. 0-0 with 13:50 to go in 1st.
– Racine claims 5 for fight and 2 for boarding. Instigating, Misconduct and Fight for White.
– SD continues to control play. Hold 5-0 shot lead and hold the puck possession lead.
– 9:34 left in 1st and ONT still in search of 1st shot on goal. 0-0 score.
– Good traffic in front of Petersen. Giovanni Fiore with a look between the circles. Clips right pad and stays pinned under. 0-0 with 8:21 left in 1st
– Open hockey in the second half of the first period. ONT establishing offensive presence. Dumping and retrieving pucks. 0-0 with 5:17 left in 1st period.
– Shots improve to 7-4 for SD. Icing ONT. ONT pushing back from sluggish start. 3:17 left in 1st period. 0-0
– 1st period comes to a close. 0-0. SD starts strong, held ONT shotless for 10+ min. ONT pushes back. Grab 7 shots. Shots 8-7 SD

– The Reign enter tonight’s contest on a four-game winning streak and have standings points in nine of their last 10 contests (8-1-0-1).
– Forward Andrew Crescenzi rides a five-game point streak (three goals, four assists) heading into tonight’s contest.
– During the win streak, the Reign have only allowed three goals against and scored 13. Over the last 10 games, the Reign have allowed 12 goals against.
– The Reign currently lead the SoCal Series with a 2-0-0-1 record. Reign forwards Andrew Crescenzi (two goals, one assist) and Michael Mersch (one goal, two assists) are tied for the series lead with three points.