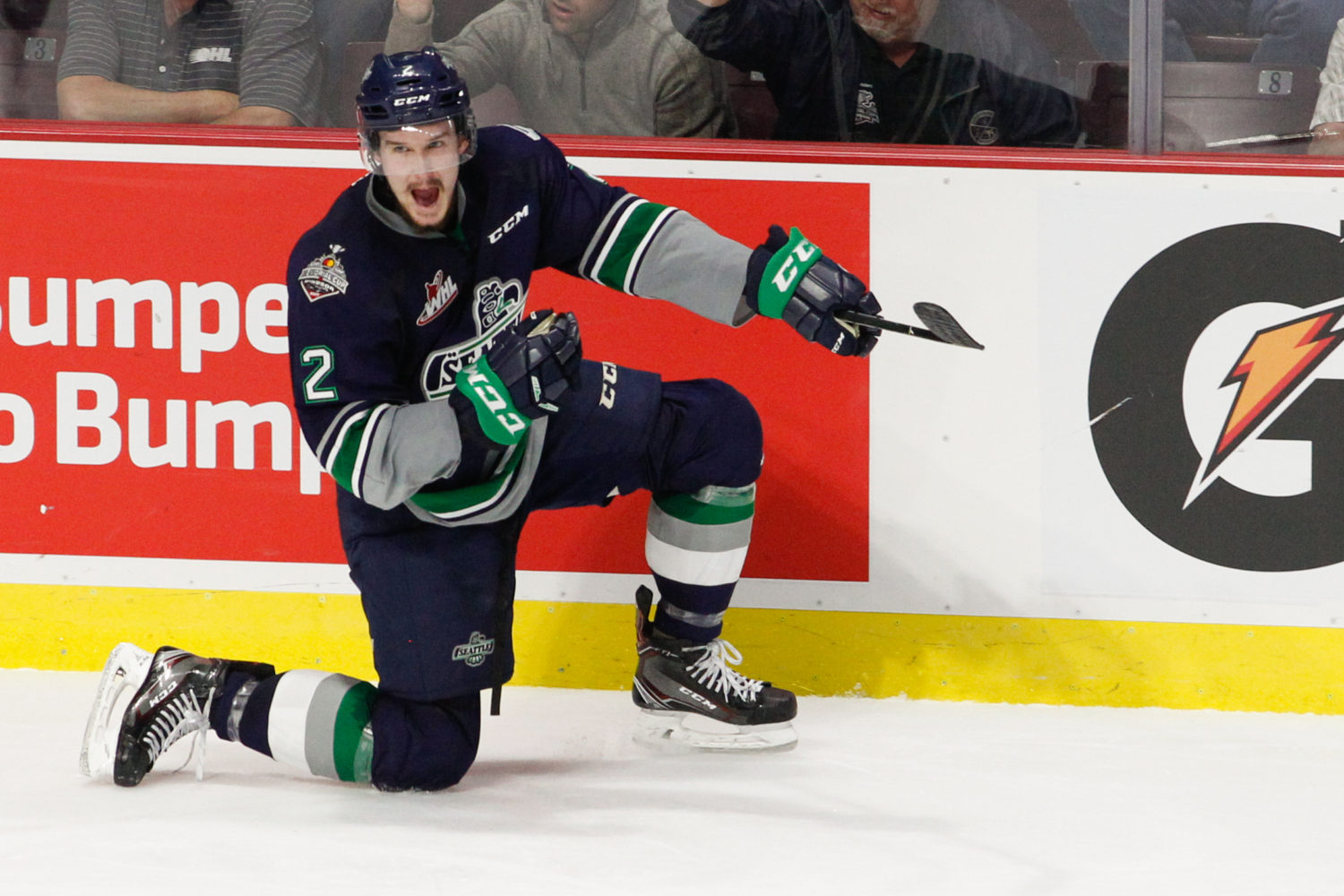 The Los Angeles Kings have signed unrestricted free agent Austin Strand to a three-year, entry-level contract, the team announced Monday. Strand, a 1997-born over-age right-shooting defenseman, leads the WHL’s Seattle Thunderbirds with 26 points (10-16=26) through the first 24 games, and has 84 points (25-59=84), a plus-one rating and 196 penalty minutes in 223 career regular season games with the Thunderbirds and Red Deer Rebels. He has played in the last two Memorial Cups, having been a part of Seattle’s 2017 WHL championship team and the Red Deer squad that hosted the 2016 tournament. The 6-foot-4, 216-pound Calgary native attended training camp with Edmonton prior to this season.

I’ve checked in with several contacts inside and outside the organization on Strand, and the one thing that keeps coming back is that he’s an excellent skater, with a Kings contact praising his transition acumen. He’s Seattle’s top power play option from the point, and nine of his 10 goals this season have come with the man advantage. His character and leadership were also noted.

Strand has blossomed with the T-Birds this season. Though he had been a 13-point contributor in his first two WHL seasons, he emerged with nine goals and 32 points in 74 games last season before his points-per-game exploded early in 2017-18. Having spent too much of my waking life in the corridors of Key Arena and the ShoWare Center, on the surface, I can say that this type of trajectory does seem to match up similarly to fellow 6-foot-4 defenseman Brendan Dillon, another former second-pairing Seattle defenseman who broke out in his 20-year-old season with eight goals and 59 points in 2010-11 and signed an entry-level contract with Dallas.

Via Byron Hackett of the Red Deer Advocate:

Strand is enjoying a renewed sense of confidence after both attending the Edmonton Oilers training camp this summer, but also more power play time to start the 2017-2018 WHL campaign. Along with Oilers camp, Strand credits Thunderbirds first year head coach Matt O’Dette with giving him some extra freedom on the ice this year as a reason for his success.

“It was nice to get that experience under the belt. I think it gave me more confidence in my skating. Been able to do what I want to do on the ice. Coach has given me the leeway to do it. He’s been really supportive with helping me out,” Strand said.

“A bit of off-ice too, seeing what those guys do… mostly on-ice with just confidence, and I think I figured out what it takes to play at the next level, with what you need to do with passes in the d-zone, and I’ve started to figure out just get it to the forwards.”

Speaking in the past with team representatives about scouting players in over-age major junior seasons – WHL, OHL and QMJHL teams may keep as many as three 20-year-olds on their roster – scouts want to see “20’s” excel in their particular type of role. If they’re scorers, they have to be dominant scorers. If they’re stay-at-home defensemen, 20-year-old defensemen have to be game-impacting stalwarts. That appears to be applicable here, given Strand’s impressive early season returns.

The Kings received their commitment after Friday’s game in Victoria, B.C., which pitted Strand against another Los Angeles defensive prospect, Chaz Reddekopp. Strand was named the game’s second star that night, and when the rivalry continued Saturday, it got heated:

That resulted in a charging major and a game misconduct for Strand, and a whole lotta punches thrown by Royals netminder Griffen Outhouse.

“We are very excited for Austin with his signing a NHL contract with the Los Angeles Kings,” Seattle General Manager (and former Philadelphia Flyers General Manager) Russ Farwell said in a statement. “He has worked hard on his game and came in this year with a determined attitude to continue to improve and had a great start to the season. It is always great to see guys get rewarded and there is a lot of upside yet in his game, but a big man that can really skate is what made him attractive as a prospect. He has played very well for us since coming in last year and both he and Aaron Hyman were huge pieces for us winning the WHL Championship last season. We look forward to watching him develop the rest of the year.”