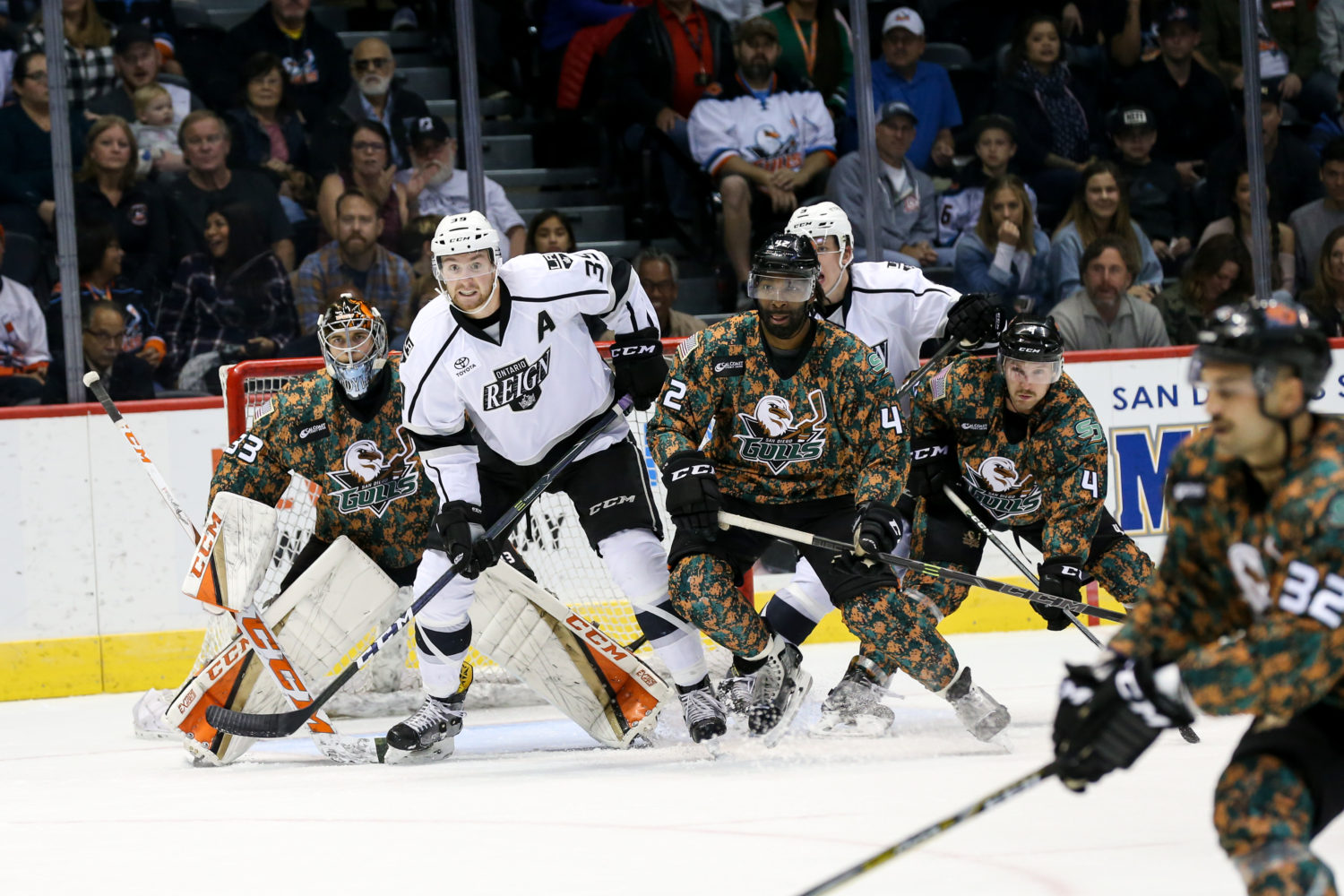 The Ontario Reign are learning.

Currently with the youngest roster in their brief AHL history and an increased focus on developing talent from within the LA Kings organization, the Reign have hit the classroom through video study and off-ice programs just as often as on-ice practices and game preparation.

“Patience,” Head Coach Mike Stothers stressed after a start to the season that saw the Reign score only eight goals and yield 22. Now on a five-game point streak rolling into this weekend’s contest against San Jose, the patience is paying off for the coaching staff and the Kings Development Staff including coaches Sean O’Donnell and Glen Murray.

Since the 0-6-0 stretch to start the 2017-18 season, the Ontario Reign have scored 14 goals over the last five contests, held opponents to eight goals over that same stretch and have allowed minimal quality scoring opportunities, sometimes none, as they carry an 4-0-0-1 run into San Jose.

ORI: Youngsters speckle the Reign roster. From the start of the season to now, what is shaping up well for this group?
Murray: There are a lot of young guys coming into the league for the first time and maybe they thought the league was easy. Getting the reps and game situations is a big adjustment coming from juniors or college. We work with the defense on puck retrievals and puck movement and working with the centers and wingers with the plays along the wall or in the neutral zone or defensive zone. They don’t know. In juniors and college, it was easy for them. Now they are playing against a lot of good players and they need to understand the importance of those little things.

ORI: How do you keep the development standards high while juggling in-season challenges? A player, like Matt Luff, is not only processing his first professional season, but also trying to keep up with the Kings system coming out of junior hockey.
Murray: He used to practice every day in juniors, but no he needs to know the importance of preparing on and off the ice. Now you’re a pro hockey player and you’re 20-years-old. It’s about improving your game and winning hockey games.

ORI: Now that the start of the season and several professional “firsts” in the rear-view mirror, are you seeing more “ah ha!” moments as these younger players see these development-day lessons materialize in games?
O’Donnell: In the minor leagues, there is a lot of turnover. The big difference is that this is a job now. They are not going to school. The attention to detail has surprised a lot of guys. You cannot just sit there and go out and play and win. Every little detail is now under a microscope and they are starting to grasp that.

ORI: “Patience” has been the unofficial motto to the start of the Reign season. Not just with the standings, but also with players making the move up after being in the system several seasons like Justin Auger or Andrew Crescenzi. How much of your message during these development days is “patience” to an antsy young group that wants to see results now?
Murray: It’s hard. You can never stop working on your game. Sometimes we see some of the best players in the summer time and they are always working. We reiterate that here. We have great examples here and they work hard to earn that call-up.

ORI: Defensively, it has to be rewarding to see how this young blue line group is rounding out, especially after the performance last Saturday in San Diego, keeping the Gulls to just 12 shots.
O’Donnell: It’s really good. You get players coming from different backgrounds and young guys and their first taste of pro hockey. Maybe they had different systems or a different attention to detail, but any time you get zero shots in a period (second period) is almost impossible to do. To go into another building and face a rival team like San Diego and hold them off the shot sheet for a full period, is a stepping stone in the right direction. They are starting to get it.

ORI: The Reign schedule, to put it nicely, has been favorable with the amount of practice and downtime to start the year. How helpful has this been juggling development and game preparation knowing the schedule will get hectic at the end of the month and into December?
O’Donnell: I think it’s good to have all this practice time early in the year. You could see that the team wasn’t on the same page early in the season. There are a lot of new bodies and a different coach on defense (Assistant Coach Dave Bell) and a lot of players have never played for Mike Stothers. They are starting to come together. Now they are better prepared to play those four-games in five-nights or 17 games in the month of whatever. I think there is enough good leadership here with the coaching staff and the organization itself and they will be just fine.
Murray: When I was in the minors in Providence, it’s just preparing and getting ready for the next day. Nowadays its about nutrition and eating properly. Make sure you get your proper rest and come to the rink and put in your hours. You have to be prepared. Everyone is doing it.