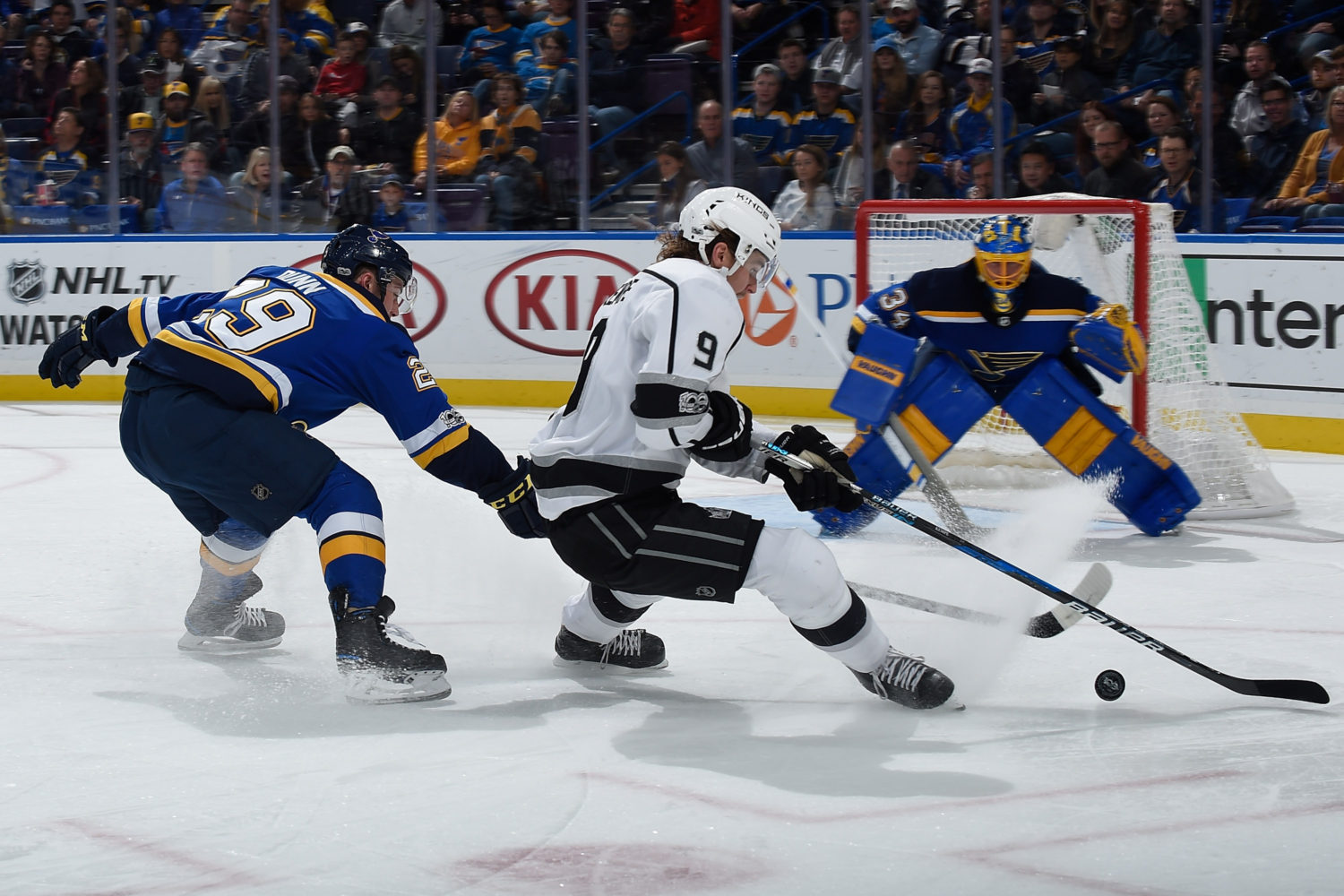 On Tuesday’s rivalry game:
They’re big games. Any time you play a division game , they’re big games, but certainly, Anaheim, since my time here and before that, I think you play a team where there’s always a lot at stake in the division and you’re playing a team that you’ve had a history with recently with in the playoffs. I think it really creates a heated rivalry where there’s a lot at stake for both teams. It’s been unusual for us. We’ve played so many games against the east early on. You always look forward to these games within the division because they’re important games.

On whether outside perception of the Kings and Ducks entering the season adds intrigue for tomorrow:
I don’t think it does. I think if you look at both teams, we’ve had a lot of injuries on both sides. They’ve had Kesler and Getzlaf out of their lineup, they’ve had defensemen out of their lineup. I think both teams are trying to work through those situations a little bit. But to be honest with you, we don’t pay too much attention to what the predictions are on the outside. I think we have big expectations here just like they do there, and we weren’t going to throw up the white flag just because we weren’t picked to win the division, and I don’t think there’s any more needed motivation when you play the Ducks because I think the games are really important games. I think they’re playoff-type games. They’re usually emotional, physical games, so I think that in and of itself helps you get ready.

On whether he told Adrian Kempe anything specific when placing him in Jeff Carter’s slot:
We didn’t tell him a whole lot because we expect the same things from him regardless of where he was playing or where he was playing before. We just felt that line was a good line with speed in the middle. With Jeff Carter, that line has been a really good line, and we though Adrian brought a lot of the same elements, and he has. Ty and Tanner really seem to work well with speed through the middle of the ice. They’re really good dot-to-board players, and when somebody can push the pace through the middle of the ice and bring the puck up the ice with speed, they seem to really thrive off that. More than anything, we just thought it might be a good fit.

On reasons behind not having drawing many penalties on the road trip, and drawing them now:
That’s a really good question. We had a five-game segment on the eastern road trip there where I think we had 19 kills and 10 power plays. I’m not sure. I don’t quite know what the answer is. We thought we were playing hard, so I don’t know. But I do think the more you attack, the more you have the puck, the more time you spend in the offensive zone … the more you can force teams to take penalties. The other night is no different. You get the puck in the offensive zone and you get to work and you force teams to defend, I think that can lead to more penalties. I don’t know if there’s been a trend there, but there was something that we were aware of on the eastern trip where we were kind of on the deficit side of the special teams there.

On whether he’s surprised at how quickly the team has taken to improving its offense:
Certainly with Dave Lowry and Don Nachbaur coming in and Pierre, I had a good idea of how we wanted to play, but it’s always good to get some fresh ideas. Sometimes it’s just a little thing. It’s a different way of looking at things, but the guys have really grasped on to really subtle changes that I think have allowed us to play faster, and focusing on some of the areas we’ve talked about since Day 1, we really think that our rush, focus on penetrating the middle of the ice has been good, and having more of a presence around the net and the middle of the ice is something we’ve worked on on a daily basis, and I think the guys have done a really good job of embracing the idea, and I think the fact that they’ve had success playing that way, it kind of helped sell those ideas. The players deserve a lot of credit, but I think the new coaches and some of the coaches and the fresh ideas they’ve had have been really helpful. [Reporter: Is it hard to encourage defensemen to jump into plays, or is that something they’d rather do, anyway?] I think that’s part of our game that’s always been pretty good. We’ve always tracked that here and we’ve always been one of the top 10 teams in the league in shots, goals … We won the cup in ’14, I think we tied an NHL record for goals from defensemen in the 26 games that year. It’s not something that’s foreign to us, but I think our defensemen are more involved as the fourth man on the attack right now, which is something we really want to try and get to, and they’re certainly part of the scheme in the offensive zone. You can’t attack with three guys, you have to attack with five, and St. Louis might be the best example of that, what they’ve done with their defense and the amount of goals they’ve scored. But the way the game is now, I don’t think you can ignore the fact that your D have to be a big part of it. [Reporter: Is that a difference between now and then, you’re just emphasizing it more?] Well, I think there’s a little more structure in terms of what’s expected from there in those situations, but to say we didn’t demand that before, that’s not the case. We wanted our D up in the attack before, we wanted our D joining the rush, coming from net-front, trying to create numbers on the rush. I just think our forwards have done a good job in terms of what they were doing with our middle lane drive and getting stuff done in the middle of the ice that opens up opportunities for that fourth man of the attack, and I think it’s been good for us.

On Drew Doughty’s emotion, and whether he has to be more mindful when addressing referees:
At the end of the day, a penalty doesn’t help the team. That can be totally avoided. That doesn’t change the situation on the ice. It’s a bad penalty. We’ve talked about it – Drew with the team. He’s well aware of that. That’s a bad penalty. I’m not going to sit here and try to justify it. Drew’s a very passionate guy. That much we know. But those types of penalties have no place. They don’t help you in any way, shape or form. [Reporter: In your experience, if a guy has a reputation for talking a lot to refs, do refs tend to call that more?] Well, they’re humans, right. If I start screaming at you, you’re going to probably not going to want to listen to me. I think if you talk to the referee as opposed to talking down to referees – they’re out there trying to do a good job. They’re good people. They’re trying to do the best job they can. I think it’s a heated game. There’s a lot of emotion involved. I’ve learned lessons as a young coach, and I told the players that. I used to get way too involved with the referees as a young coach coaching in the American League, and I realized that I was wasting a lot of energy, I wasn’t helping the team, and at the end of the day, referees are trying to do a good job, so to me they’re like lines on the ice. You’ve got to stay onside, the puck’s got to go over the blue line. They’re a part of the game, and you don’t need to waste time worrying about the referees. You can waste time learning about playing the game the right way. [Reporter: I saw them a couple of others in a few other games the last few days. Last week.] Unsportsmanlike? [Reporter: Yeah.] And I think maybe with the new standard with the slashing and the faceoffs might have escalated some of the emotion in the game. I’m not quite sure. There was a game I was watching yesterday – that was actually an American League game, sorry – the team was on a five-on-three, and then they got a faceoff violation out there from a five-on-three to a four-on-three. Those are things you’d never seen before, and I think because it’s new, it catches the players off guard. It might be from some extra emotion and anger, if you want to call it that, from the players. But again, at the end of the day, I think if you get to know the linesmen and the referees, they’re good people. They’re trying to do a good job, just like we’re trying to do a good job. I think at the end of the day we’ve got to led them do their job and we’ve got to worry about doing ours.

On good examples being set for younger players:
I think leaderships important, right? They usually set the team for your hockey team. If I’m a young guy, I’m watching the older guys and I’m trying to emulate their actions. I don’t think there’s any question. Things can be said in the locker room, but I think you’re going to lead by example most of the time. I think our guys have done a good job of that. If there’s anything you can learn from Drew Doughty, the emotion that he plays with is terrific, and you can’t play the game without emotion. But I think the leadership on our hockey team in the early part of the year has been excellent.