A very pleasant afternoon to you from cool and windy Boston, where the Kings have returned to the hotel after an optional 1:00 p.m. practice. Not all players took the ice at Jack Parker Rink at Agganis Arena on the Boston University campus, but Nick Shore did and said confirmed that there was “nothing serious” with the minor injury he sustained in Ottawa. He remains day-to-day.

-There are ample ties between those in the current traveling party and the city of Boston. Goaltending Coach Bill Ranford played for the Bruins, Assistant Equipment Manager Dana Bryson is from the area, Video Coordinator Samson Lee is a Boston College graduate, Television Play by Play Broadcaster Alex Faust is a Northeastern graduate, Christian Folin spent two years at UMass-Lowell, and if the radius is expanded somewhat, there’s also Chris Kingsley, the club’s Head Athletic Trainer, who is from Greenfield, Massachusetts, and, of course, Jonathan Quick, who attended college at the University of Massachusetts-Amherst. Not on the traveling party are Senior Advisor to the General Manager/Development Mike O’Connell, a former Bruins player and general manager, and Senior Advisor Jack Ferreira, an All-American goalie for the Terriers and a Boston University Athletics Hall of Fame inductee.

Head Coach John Stevens, meanwhile, will travel an hour north to see his son, Nolan, play for Northeastern tonight at UMass-Lowell. The Huskies’ captain, Nolan Stevens has a goal and three points in five games for Northeastern and is a St. Louis fifth round draft pick.

-A quick update: Kyle Clifford (upper-body) has not yet resumed skating. He’s progressing, but there’s no timetable on his return at this point.

-Turning our population back to Owen Sound, meanwhile, Kurtis MacDermid was back on the ice for practice the day after scoring his first career NHL goal. Former Owen Sound Attack GM Mike Futa, the Kings’ Assistant General Manager, knew MacDermid back when he was very young and shared some background on a player who he says “has a work ethic as good as any player – anyone.” The team was considering using a late-round draft pick on MacDermid in 2012, but Futa contacted him late in the stages of that year’s draft in Pittsburgh, and received a commitment that he would attend development camp and training camp even if the team did not select him. Honoring that arrangement, the team would treat MacDermid just like any other played drafted by the team. Ultimately, the Kings chose to sign him later that September, knowing that even though the defenseman was raw, nobody would out-work him and that he was fully on board to the team’s development plans. “He buys into everything they say,” Futa said.

Futa gave credit to the work that Sean O’Donnell put in with the defenseman while also noting that every year MacDermid wins the team’s fitness testing, helping to open up new possibilities in his game and growing his confidence. That he’s also able to compartmentalize particular aspects of his development, such as knowing exactly when and how to insert himself into the more rugged and physical parts of the game, has also allowed his game to grow, thus putting himself in position to lock down a spot on the roster out of training camp. “It’s been unbelievable to see how relaxed Kurtis is and how he’s enjoying the game,” Futa said. 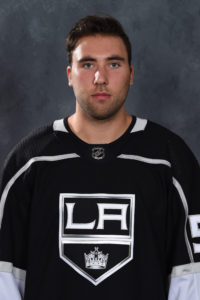 -Michael Amadio skated through his first practice day with the team, some 24 hours after his call-up to the club was made official. He was encouraged by his first taste of NHL action. “I felt comfortable out there,” he said. “The guys made it easy for me out there, which was nice. I thought I played pretty well. I felt good out there. I was pretty nervous in warm-ups, my first shift, and after that I really settled down.”

The first several shifts of an NHL career can be nerve-wracking, and when a debut is made underneath the dozens of banners depicting the legacy of the Montreal Canadiens, any temporary butterflies are only natural.

“I mean, just looking up and seeing all those fans, and the atmosphere that was in there was pretty unreal for my first experience,” he said.

Amadio was dressing in advance of Wednesday’s Ontario Reign practice when Head Coach Mike Stothers informed him that he’d be joining the team in Montreal. “My body was pretty much shaking the whole time when I got the news,” Amadio said. He packed and headed to the airport for the trans-continental flight.

“It’s always been my dream to play in the NHL, and this was just one step closer,” he said. “It was a great first opportunity for me. Obviously you don’t want to see guys go down and fill that spot, but it was a great opportunity.”

Amadio is a Sault Ste. Marie native whose goals, assists and points increased each season with the North Bay (née Brampton) Battalion, culminating in a 50-goal, 98-point season as the Troops’ captain in 2015-16. As a high-caliber scorer in juniors, it’s not a shock that his favorite player growing up was Joe Sakic.

It’s not easy to step into professional hockey as a 20-year-old and put up points, but Amadio posted a solid 16-goal, 41-point campaign with Ontario over 68 games in 2016-17 and followed it up with two goals in five playoff games.

He showed good glimpses of that in his first 9:04 of NHL time, taking one shot and winning one of three faceoffs. The comfort began to grow “probably halfway through the first [period], after my second shift.”

“He’s a 50-goal scorer in junior, so he’s got some high-end skill,” Stevens said. “He sees the ice really well, and one thing we were curious about is how he’d be without the puck and down low in his own zone. I thought he was terrific. I thought he got on the right side of people, he got plays stopped, he skated a few pucks out of trouble. I think that’s going to get him on the ice, but he sees the ice, he makes plays, he can shoot to score, he’s got a real offensive part of his game. But he showed some real responsibility without the puck last night, which I was pleased with.”