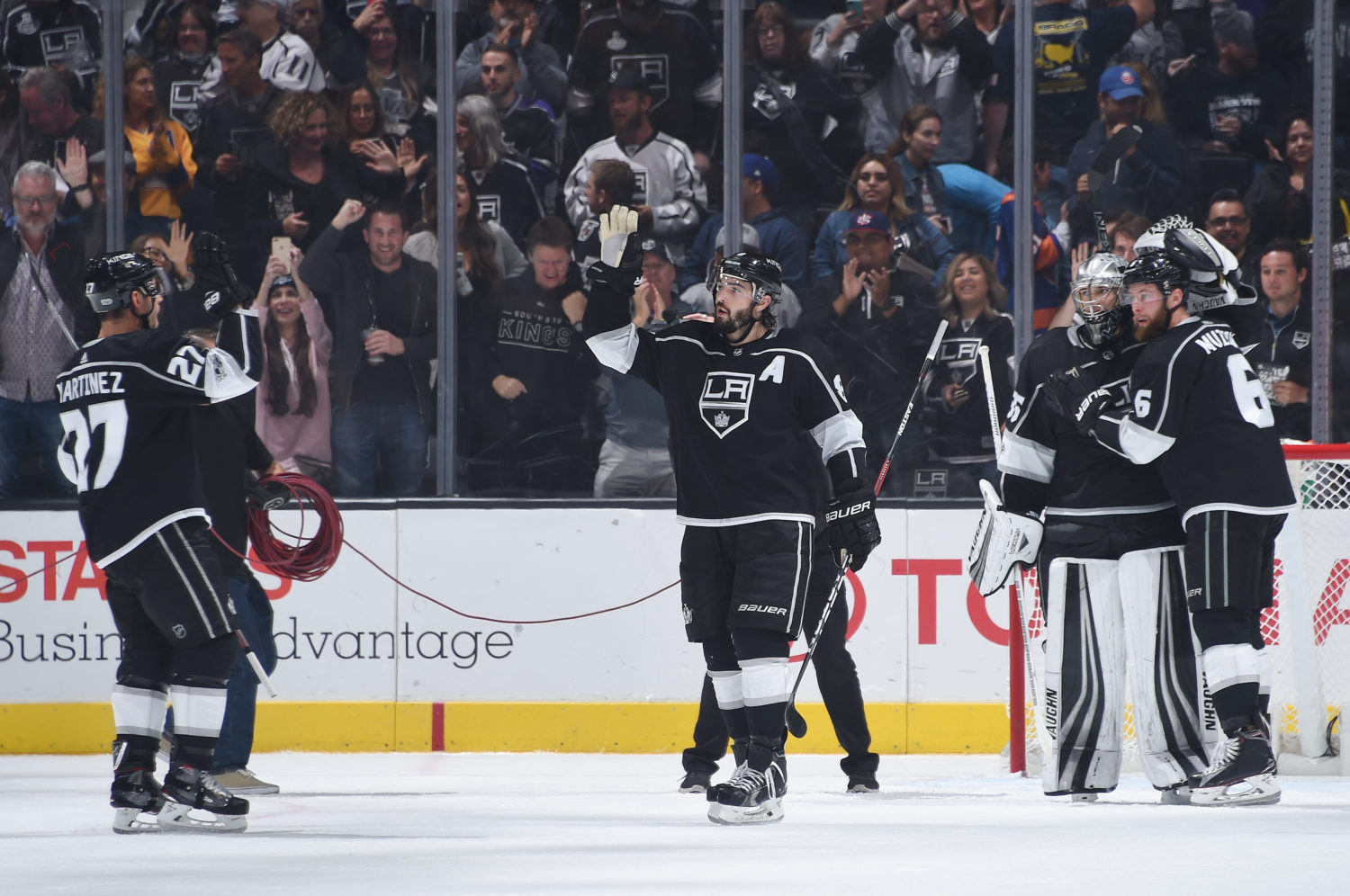 On Justin Auger’s development:
Well, we’ve liked his progression since he’s come into the organization. He’s a big guy and we’ve tried to get him a step quicker, but he’s got good detail in his game. He’s got a lot of ticks and turnovers just because he moves his feet and he checks well. He’s a good penalty killer down there. I wouldn’t call him a ‘fast guy,’ but he has a way of eluding people and going by them when he has the puck. Just thought it was a different look – a big guy who’s good on the wall that can play a north-south game. We’ve liked his progression, so we thought we’d get him up and get him involved in practice and get a look at him. [Reporter: If he does get into a game at some point, is that a nice reward for a guy who spent more than 200 games in the minors?] We’re excited for any young kid that gets a chance to play. That’s why they work so hard and put in so much time. It’s kind of fun to watch the kids that come in and get a chance to play, and there have been a few this year already. If he gets a chance to play, it’d be exciting for him because it’s a long road. He played junior hockey in Guelph and I know he was excited to sign a contract and he became a good player, won a championship in the minors, and ultimately he wants to play in the National Hockey League, so we’d be excited for him if he gets a chance to play.

On the identity of the Kings five games into the season:
I think it’s a lot of what we hoped it would be. We wanted to be a really solid, defensively sound team, but we wanted to have more of an attack mentality so we can do more with the puck. We’ve created some really good quality opportunities on the rush, and I think we’re starting to implement some of the things in terms of having more of an attacking mindset when we’re in the offensive zone. I think we’ve got lots of work to do with that. We want to be an aggressive team, but we want to have more of an attack mindset on our team.

On reductions in goals-against and shots-against:
That’s a little bit of a concern. I think we can be better defensively. I think we’ve given up more chances than we need to. I don’t think we managed the puck as well in the Islander game as we needed to. We had a little bit of trouble with the neutral zone and it came back to bite us a little bit. But I think the commitment has been there. There’s been some real good, honest work in terms of what we’re trying to do there, but I think we can not be kidding ourselves, either. We’ve got some real solid goaltending, our penalty kill’s been excellent, but we’d like to see those chances against come down a little bit. It’s been a little bit up and down. Five games is a small sample. Shots are down overall, but I think in general we’d like to tighten up a little bit defensively. It’s not going to take away what we’re trying to do offensively, but we were a plus four, I think, in the shot differential through five games. That’s a good differential provided it’s consistent and not up and down with peaks and valleys.

On players indicating there is a “fun” atmosphere around the team this season:
Well, I think winning is fun, so I think we’ve got to give a little credit to the success we’ve had that’s created that atmosphere, but we really have tried. We’ve got a staff here that gets along well. I think those guys teach very well. I think part of their teaching is they try to make it light sometimes with a real strong message. Also try and build the spirit of our hockey team and what we’re doing. There’s certainly been a focus on that – trying to bring that element to the rink – but I do think success breeds a real positive atmosphere around here, so the real challenge to us is when it gets to be a grind and we don’t have success every night to still be able to hold ourselves accountable and still have fun.

On whether he will watch the Dodger game tonight:
Actually, Montreal’s playing tonight, so I’ll be watching that game. [Reporter: The other night, I don’t even know if you noticed this, but when Justin Turner hit that home run, there was a big roar in the crowd. Did you guys notice that?] Yeah, I wondered what the roar was, and I saw [it was the] Dodgers, but it’s great. I think our guys are all rooting for the local L.A. team. There’s a huge following here, they’ve had an unbelievable year, so I’d certainly like to see them continue to have success in the playoffs. I think it’s great for them, great for the city. [Reporter: What’s your favorite sport, outside of hockey?] That’s a good question. I enjoy all sports. I wouldn’t say I’m a huge fan. I do enjoy watching golf, I enjoy watching football, I enjoy watching playoff baseball. I like playing golf and I like watching football. I’m not sure I’d pick one over the other. [Reporter: Did you play those sports growing up? Did you play lacrosse or soccer?] I didn’t play football, I played lacrosse a little bit. Played lots of golf. I love golf. It’s just a game that challenges you. You can play the best round of your life and feel like you could’ve played better. You get to be outside. You can do it with business, you can do it with family, you can do it with friends. I just like golf because it lets you get outside and spend a lot of quality time with people. That’d probably be my next favorite, outside of fishing and things like that. [Reporter: How often do you get out in the summer – golfing?] I hadn’t played very much at all. I stopped playing when I had kids, but my kids are playing now, so I actually played probably four, five, maybe six times this summer. It’s more nine holes now than 18. 18 just takes too long. I like to get out on the water in the summertime. I’ve got a couple WaveRunners. I don’t get fishing as much as I’d like to, but I’ve got friends who like to go fishing. I usually use my time doing that than golfing, unless I’m playing with the kids.