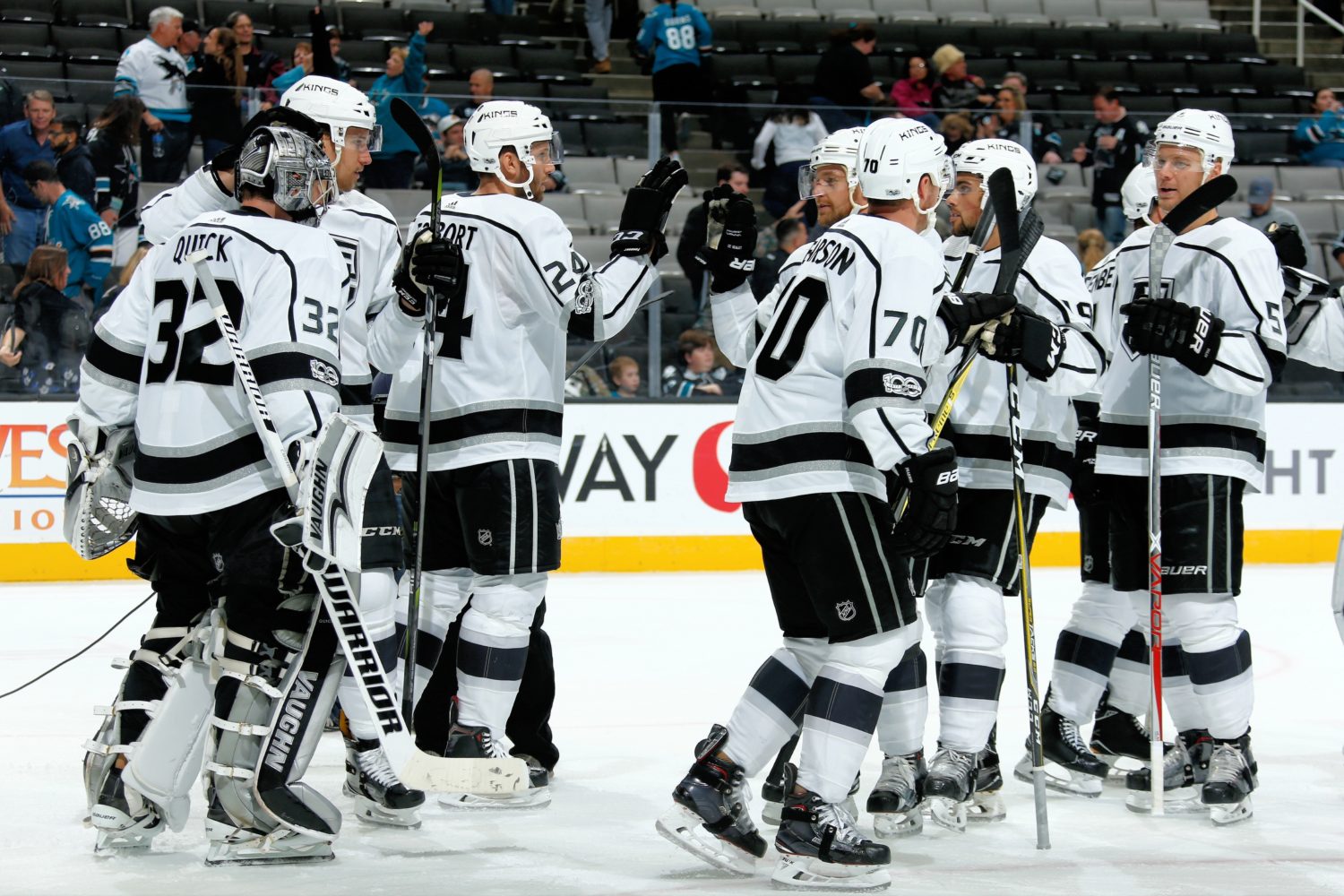 Good day to you all, and a happy Monday to you, Insiders. I doubt many of you are as excited for the palpable, concentrated silence that a Monday brings to Toyota Sports Center as those of us who regularly work Saturday afternoons in this building, but I’ll gladly take the hushed hum of the air conditioning units over the cacophony of dozens of screaming children mixed with the heavy footsteps of those chasing balls and pucks through media row. Get off my lawn, indeed.

The Kings moved practice up by an hour – more on that in a moment – and when emerging from team areas shortly before 9:00 a.m., aligned as such:

-There’s nothing to share at this moment on Marian Gaborik, who hasn’t been spotted on the ice since the last week of September. I should have an update there within another day or two. Meanwhile, Alec Martinez (lower-body) is making progress from an injury he suffered at the very end of practice last Wednesday, according to John Stevens. “He’s actually feeling a lot better, so I would think that it’s coming soon. We thought there was a chance he’d skate today, but there’s no sense rushing him back and pushing it. I think a day right now might save you a week moving forward, but I think he’s close to getting back on the ice,” he said. As for Brooks Laich, the partnership is still what I reported last week: it’s an open-ended arrangement for him to continue to practice with the club. I don’t have any sense at the moment that there’s anything brewing beyond that.

-Practice was moved up by an hour because of team-building exercises arranged by Rick and Ryan Matishak and MGI Consulting, a group that has built partnerships with NHL clubs. It was originally scheduled for just before the start of the season, but the schedule was more opportune this week. Players will break into groups, and because these are hockey players, there will be scores assigned, and they’ll compete (and likely talk smack) with each other. “There will be some challenges, they’ll have some guidelines that they have to work through, and if you don’t pay attention, you start to get penalized when you don’t follow the rules, so usually chaos sets in,” John Stevens said. Examples? “They’ll have big areas roped off where they might have to rescue something from the middle where they can’t access it. So you’ve got to figure out a way to access it. They’ve got to get through a web with restrictions. There are several different things that they’ll do, along with some trust exercises and some personality communication exercises that they’ll do. One guy will have pieces, the other guy will have the picture, and he’s got to explain how the pieces go together to paint the picture, so communication becomes a real factor. There’s a lot of little things they do that are pretty dynamic, and again, the lessons are obvious.” Coaches will take part as well. “We’ve got a team, yep,” Stevens continued. “We plan on being first.”

-After microphones were turned off there was additional discussion on the discrepancy in scoring chances from Saturday night. But the way the team logs chances is much more complex than simply placing a number alongside the number of chances generated by both the Kings and their opponents. For instance, where is the chance coming from? Is it from a clean entry? Is it off a forecheck? Is it coming from the center of the ice? Was it a five-on-five chance? Four-on-four? Which line was on the ice? What line countered them? In any event, the team was happy with where the chances were coming from, and the amount generated by a number of situations. “There’s no secret [San Jose is] a very good home team,” Anze Kopitar said. “Their starts are usually very intense, and there’s usually a fire drill in our zone the first few minutes. We knew they tend to do that, so I think we came out the way we wanted to and kind of took the game to ’em. I think we were shooting the puck early and getting bodies to the net, so it kind of backed them off. It was a good start, and obviously Brownie scoring pretty early in the period helped out. It was definitely the start that we wanted.”

-For those who missed the LA Kings Insider: 2017 NHL China Games Special, FOX Sports West has you covered. (It’s too bad this special isn’t affiliated with, uh, LA Kings Insider, because Jack, Jake, Ed and Patrick did a really nice job of putting it together.)

-More to come shortly from Stevens and Kopitar, Insiders. Thank you, as always, for reading.