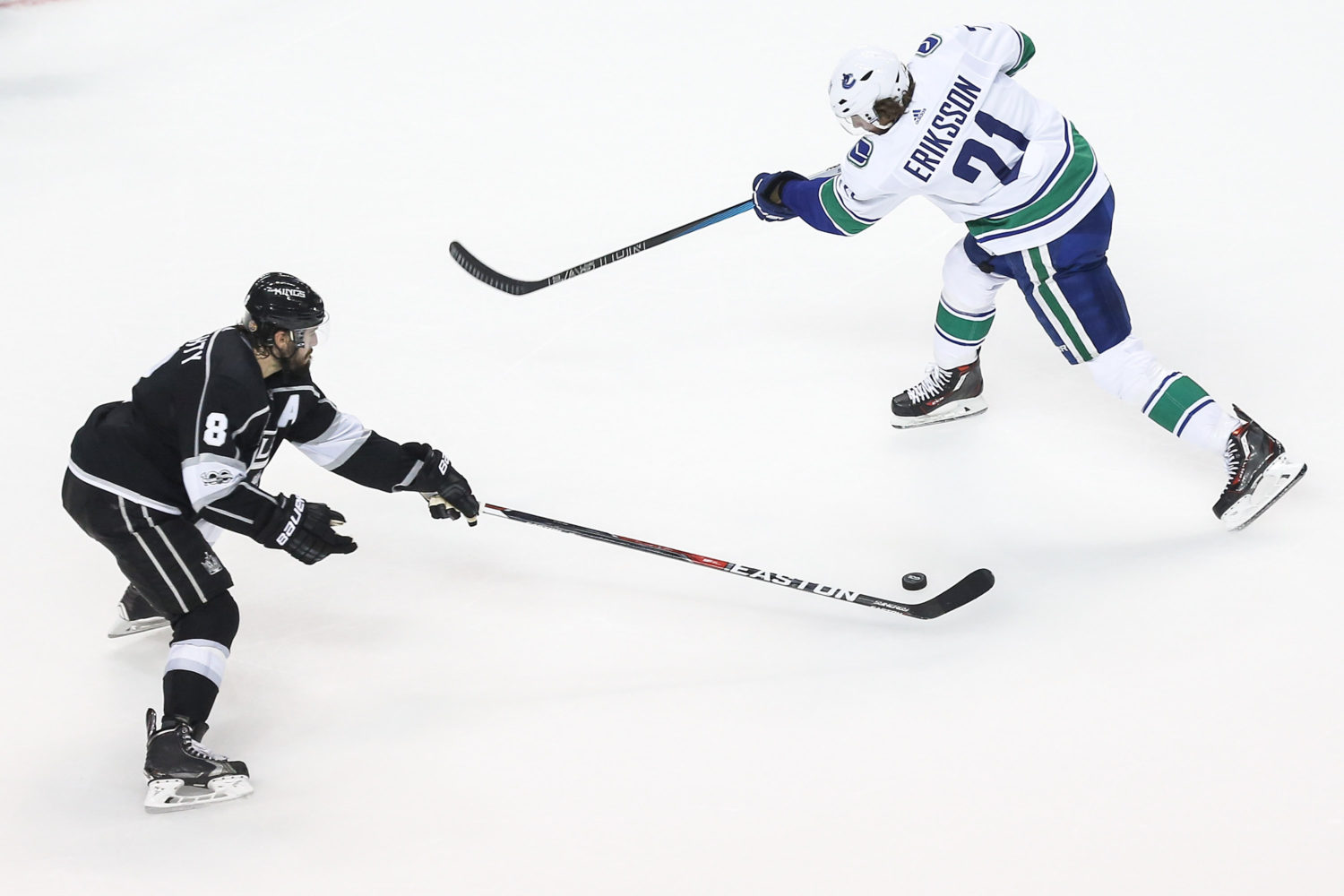 Preseason stats are worth roughly as much as a three-dollar bill, and certainly there are analytics much more worthwhile than simple goals for, goals against and special teams numbers.

But teams would much rather be starting from a reference point of success, so the Kings’ solid penalty killing rates as the preseason elapsed is better than scuffling through some special teams trials and tribulations.

Los Angeles killed off 13 of 14 penalties over its last three preseason games, a stretch that was punctuated by two extended 5-on-3 kills in the 1-0 overtime win over Anaheim last Saturday. (Again! Preseason! Not all games featured best-on-best competition.)

In watching the Kings on the kill, there was something incorporated into their defense that seemed to bond the standout performances together: the usage of their sticks in checking and defending, particularly on the penalty kill. John Stevens had spoken about effective stick usage early in the preseason, and all teams will always encourage their players to keep their sticks on the ice at all times, but the reinforced adhernce seemed particularly evident last week.

“It’s something we’ve really focused on,” John Stevens said. “I think when you get some of the new coaches coming in, especially the guys coming from the junior level, they were teaching a lot of fundamentals, and we’ve always talked about sticks here, but there’s been maybe a renewed focus on that part of the game. The whole idea is to get the puck stopped, get a stall, turn a puck over, whether it’s D-zone, neutral zone, offensive zone, special teams, puck recovery, and just better sticks can go a long way to getting those stalls, getting pucks turned over and discouraging passing lanes.”

The two coaches who came over from junior hockey were Don Nachbaur and Dave Lowry, and Lowry is the coach who works the closest with the defense and the penalty kill.

Lowry’s answer to a question posited similarly to Stevens was essentially in lockstep with his coach’s response. Keeping the stick on the ice is “a primary focus.”

“It’s always ‘have your stick ready,’ but it’s also stick positioning on the ice and all that,” Lowry said. “It’s funny – early on, you hear coaches talk about it, and you can respect the fact that when you’re a player, your coaches are always telling you, right? The generations change. It used to be two hands on your stick. Well, two hands always brings your stick up in the air. You put one hand on your stick, it puts it on the ice. Coaches, when they watch video, they say, ‘the sticks make you a bigger player,’ and they close lanes. When you’re a player, a lot of times, if you’re not watching the video, you don’t really grasp the concept. But when you start coaching you can really see, if you put an emphasis on it, how much it really does affect the play.”

And it will have a larger impact this year, with slashing infractions being more strictly enforced. In an effort to reduce hand injuries, slashes to the body, stick, or “on or near” the hands, as described in the linked video, will be called with a greater frequency, and the convoy of players to the penalty box early in the preseason was a reflection of the heightened approach towards such enforcement

Derek Forbort has been a player who, along with Jeff Carter and Kurtis MacDermid, has the widest wingspan among Los Angeles’ skaters. It’s a significant asset in his skill set, which allows him to separate body from puck when the opportunity for a more physical encounter isn’t immediately there.

There are nuances to his approach.

“Especially with having the long arms, I think sometimes I’ll kind of leave the stick in a little bit, just to kind of disguise how long I can get it,” he said. “On the PK, I think it’s all about just having an active stick and letting those guys think they have the lane, but really you have a little extra and you can get the stick out there and get a poke on the puck.”

He grew up during the heyday of Nicklas Lidstrom’s career – that was about a 20-year heyday, by the way – which means he had a wonderful model that he could try to emulate.

“His stick was always on the ice, just moving it,” Forbort said. “He was probably the best I’ve ever seen doing it.’

It’s part of the team’s adherence to “detail” – a word one hears regularly throughout the season but is illustrated in a number of ways. Keeping the stick on the ice is a fundamental aspect of checking and defending, and someone who coached the defense and penalty kill of the team that allowed the fewest goals cumulatively over the last seven seasons – coincidentally, the time he joined the organization as an assistant coach under Terry Murray – is particularly able to push the message across.

“We’ve done a lot of things [in practice]. We’ve done drills with guys carrying a puck on their free hand so they can’t hold two hands on their sticks, so it forces them to have a stick on the ice and just leave an imprint in their mind,” Stevens said. “But clearly it is a detail in the game that can surely help you.”

Dave Lowry, on reinforcing fundamental approaches with advanced, entrenched players:
It’s everyday reminders. These guys are creatures of habit. With the way that they’re calling the stick infractions and all that, if you’ve got two hands on the stick and you’re defending with two hands, the natural tendency is to be hard on his stick or to lean on someone. Now, today, that’s supposed to be a penalty.

Lowry, on whether there’s an advantage to having large defenders with big wingspans:
Absolutely. If you use your stick properly, you should be able to get to pucks first. You look at mobility, you look at the skating aspect of the game, you want defenders than can skate, and if they’re big, that’s even better. If they can get there first and they can get their sticks on pucks, it makes you a bigger player, it makes it harder for the offensive guys to get pucks, get shots through.

Lowry, on teaching about the first point of contact and entering a battle:
We want to close and we want to close quick. It’s all about going in and creating separation. If you can be first in and get the puck, you don’t have to make contact. But if you’re the second one into the battle, you want to make sure you stop their motion, and you want to close it and end it as quickly as possible.

Derek Forbort, on reading the rush and knowing when to interject with his stick:
I try to keep my stick on the ice as much as possible. I don’t know. You don’t really think about it. It just kind of happens out there when you’re in the drill, competing, and I think your instincts just take over – when to extend, when to stay home a little bit with it, just from years and years of doing it.