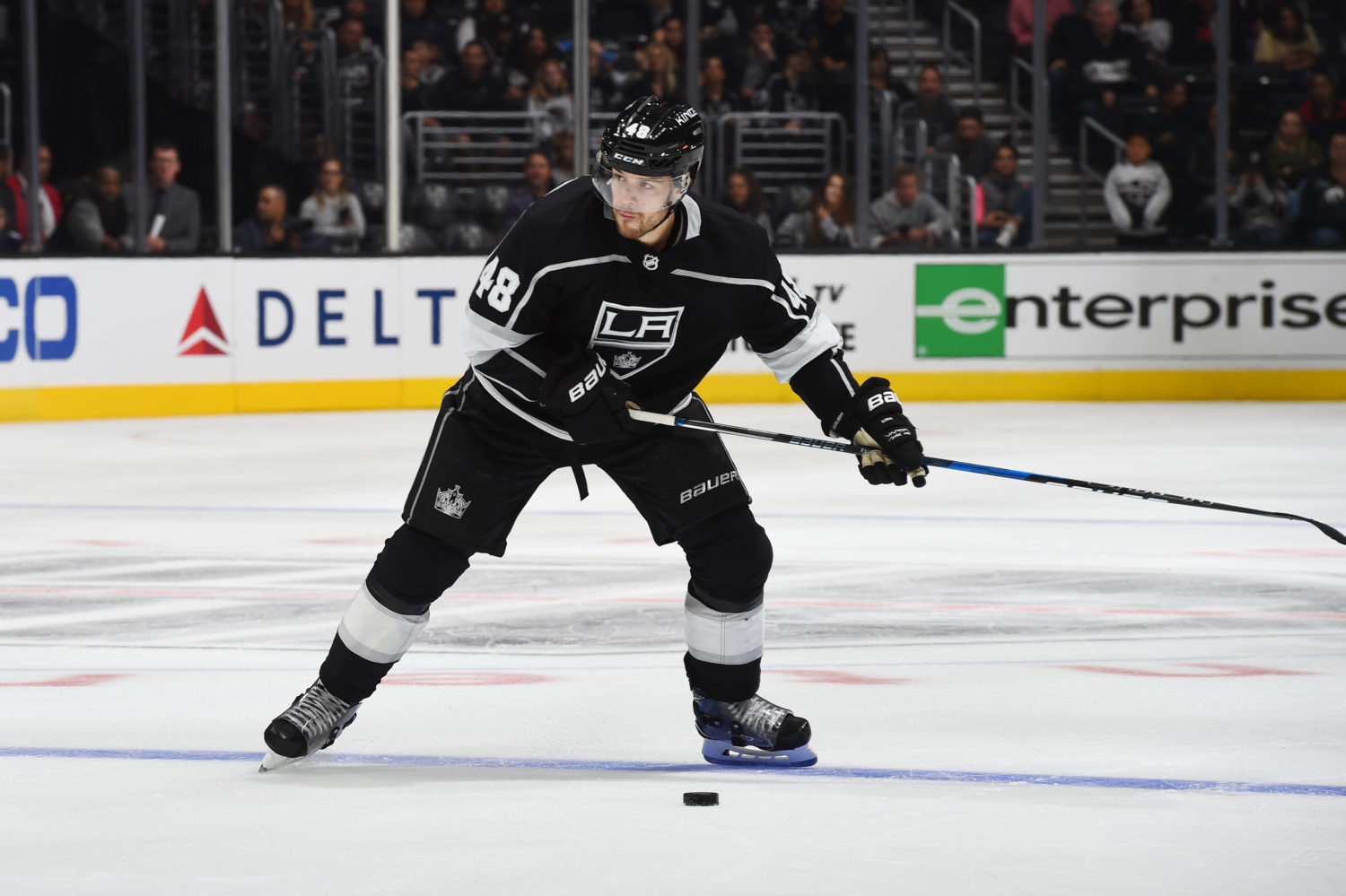 To a greater degree than any training camp in recent history, the Los Angeles Kings are essentially holding open tryouts for a number of available spots on their roster. At goaltender, defense and forward, there has been heavy competition for roles that in previous years had been largely predetermined by the time camp opened.

This is a good thing. There are tough decisions ahead, but it has been reiterated that these are good decisions. While the top-end core is intact, there are more options, greater depth and a transition towards younger players with a good mix of speed and skill competing to complement the likes of Anze Kopitar, Jeff Carter, Drew Doughty and Jonathan Quick. This is a transition that has been sorely needed across the organization.

One thing I’ve repeatedly heard is that the Kings will be looking to put the “best team together.” While that may sound more like non-committal organizational speak, it’s a slightly marked departure from dialogue I’ve had in September and early October in previous seasons, when asset management and the acknowledgement of waivers steered similar conversations. Like every team, the Kings will be placing intriguing players on waivers.

There are, essentially, two lines that are more or less set in stone in advance of the season. These players have skated together since early in training camp: Pearson-Carter-Toffoli and Clifford-Shore-Lewis.

There has been movement atop the lineup, with Jonny Brodzinski and Michael Cammalleri getting opportunity alongside Anze Kopitar. John Stevens, like Darryl Sutter before him, has spoken highly about the use of “twos” – pairs of forwards that play together, with one additional forward cycled through them through needs and merit – but with Cammalleri notching six shots on goal as part of a two-goal performance against Arizona, it wouldn’t be a surprise to see him round out the reprisal of a popular 2007-08 line when the season opens next week against Philadelphia. The final tune-up for the season is Saturday night’s home game against Anaheim (7:30 p.m. / Prime Ticket).

Elsewhere, there is significant competition up front. One area where the Kings will need to show improvement is in consistency and productivity in its third line, because there is a significant drop off in center qualifications between Anze Kopitar/Jeff Carter, and Those Who Follow. Adrian Kempe had been penciled into a third line center role, and with his speed to burn, he certainly fits the team’s evolved mantra of attacking the center of the ice at a high velocity. But he has dealt with penalty issues and his play away from the puck during the preseason, and while he was able to often enter the zone cleanly in setting up scoring chances against Arizona, he still finished with 10:06 of ice time, one shot on goal, and three faceoffs won in 12 opportunities. 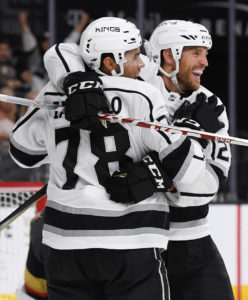 On Friday, the group that would be considered a “third line” was comprised of Kempe between Alex Iafallo and Nic Dowd, the latter of whom has transferred to right wing in training camp. This is an intriguing mix of speed and playmaking, but all three players are more or less still on the roster bubble. Dowd is likely safe, and it still appears there’s a greater-than-50% chance Iafallo opens his professional career at AHL-Ontario. But the coaching staff and management has been thoroughly enthused about Iafallo’s camp, and his stock has risen more than that of probably any other forward. I was skeptical early in camp when I heard a thought that Iafallo could play in the league right now; I’m getting the sense that the number of people who believe that within the front office has increased substantially. He may not make the team out of camp, but with his speed, puck pursuit and all-situational attention to detail, he’s bound to get games in this season for a team that needs to accentuate its production from the wings.

Skating together on the fourth line at camp on Friday were Andy Andreoff, Brooks Laich, Jonny Brodzinski and Justin Auger. (As noted earlier, don’t put undue stock on who aligns with whom for the final preseason game.) Andreoff appears to be safe, while I don’t have a firm sense on what the plans are for Laich, who has only gotten into one preseason game thus far (and scored an overtime goal off a terrific play by Iafallo). Of that group, Auger, who is not waiver exempt, is the player most firmly on the roster bubble. They’re looking for consistency out of Auger, who endured an up-and-down season in 2016-17. But he’s multi-situational and a capable penalty killer with a massive wingspan, and given the team’s attention to detail and emphasis on keeping sticks on the ice while defending, there’s certainly a fourth-line-plus-PK-detail role that he could earn. But while Auger has very good hands for a big player and has found success around the net, he’s yet to show any sort of burst or explosivity with the puck that could create separation and allow him additional freedom in the offensive zone. There’s also an adjustment he’d have to face in the evolution from a player who has essentially played top-six minutes throughout his professional career into a player who would occupy a fourth line role in Los Angeles, which necessitates a change in approach to his shifts, given that such a role would adhere to more of a sprint than a marathon, so to speak. 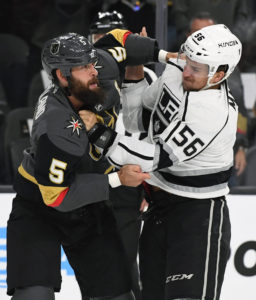 Defensively, two players who have had exceptional camps are Oscar Fantenberg and Kurtis MacDermid. MacDermid’s stock has grown immensely over the last two years as he has done every single thing in his power to put himself in position to earn a roster spot. There are areas that he will look to continue to improve, such as his gaps and channeling forwards to the outside, as well as his ability to play with pace and exchange the puck up-ice quickly. But it has been reiterated by so many people in the organization that the 6-foot-5, 239-pound MacDermid, who has been described as possessing an “elite” level of fitness, is a tremendous listener who has benefited from his father’s 690-game NHL career, which included stops in Hartford, Winnipeg, Washington and Quebec.

“Nothing’s a foreign language to him,” one member of the organization said of his pedigree and situational understanding before praising MacDermid’s advances in positioning and ability to use his size, reach and stick as an asset in addition to his intimidating frame. Many in the organization compare him similarly to Sean O’Donnell in terms of his physicality, positioning and respect for the game and his teammates, and the two have worked intricately together since MacDermid’s arrival in Ontario in the 2015-16 season.

And then there’s Fantenberg. Penned into Ontario’s opening day lineup over the summer, Fantenberg followed an eye-opening outing against Vancouver at Staples Center with a pair of impressive outings against the Canucks in Shanghai and Beijing. He added another 16:19 against Arizona on Thursday, a game in which he jumped up to join Drew Doughty for six shifts in the third period.

The coaching staff didn’t acutely know what they had in Fantenberg at the outset of camp; as it turns out, the scouting report that he recognizes his options quickly and creates pace with the puck and takes smooth, efficient and powerful strides has transferred well into the NHL preseason. Like Iafallo, there are those who believe he could be an asset to the team right now; unlike Iafallo, he at this point may have a better-than-50% chance of making the team. Like MacDermid, he wouldn’t have to clear waivers to be assigned to Ontario, and while the team will be looking to construct the best lineup possible, waiver considerations is most likely to enter into the forefront of the discussion as tiebreaking criteria.

Chris Lee, a veteran of a combined 782 games played between the KHL, AHL, SHL, ECHL and DEL who turns 37 on Tuesday, also fared well in camp, though it remains to be seen if he’s trending towards a roster spot with the club. At this point, it’s not yet clear if the team will keep seven or eight defensemen when it submits its 23-man roster to the league on Tuesday.

“I think we’ve had conversations about all that, but I think it’s only fair to the players if you see training camp to the end,” Stevens said. “It’s not just games, it’s practices. The practice level gets higher every day, and you want to have a good evaluation of the players in practice and how they perform, move guys around a little bit.”

In goal, there’s also major competition between Darcy Kuemper and Jack Campbell. Kuemper was signed with the intent that he’d be the club’s back-up to Jonathan Quick, and that’s likely the way he’ll end camp. But both goaltenders have held serve with strong performances – Campbell was excellent in Anaheim and Vegas, and Kuemper was among the team’s top players in Beijing last Saturday – so it is not clear if there has been movement in the battle for the back-up goaltending position.

“We finish up on Saturday and we still have time, and we have options,” Stevens said. “We’ve seen in the past that if somebody doesn’t start on your team today it doesn’t mean they’re not on your team at some point during the year. Some guys are ready now, and some guys need a little time. Whatever the case is, we’ll try and put the best team on the ice to start and still keep an eye on players that we think can help in the near future.” 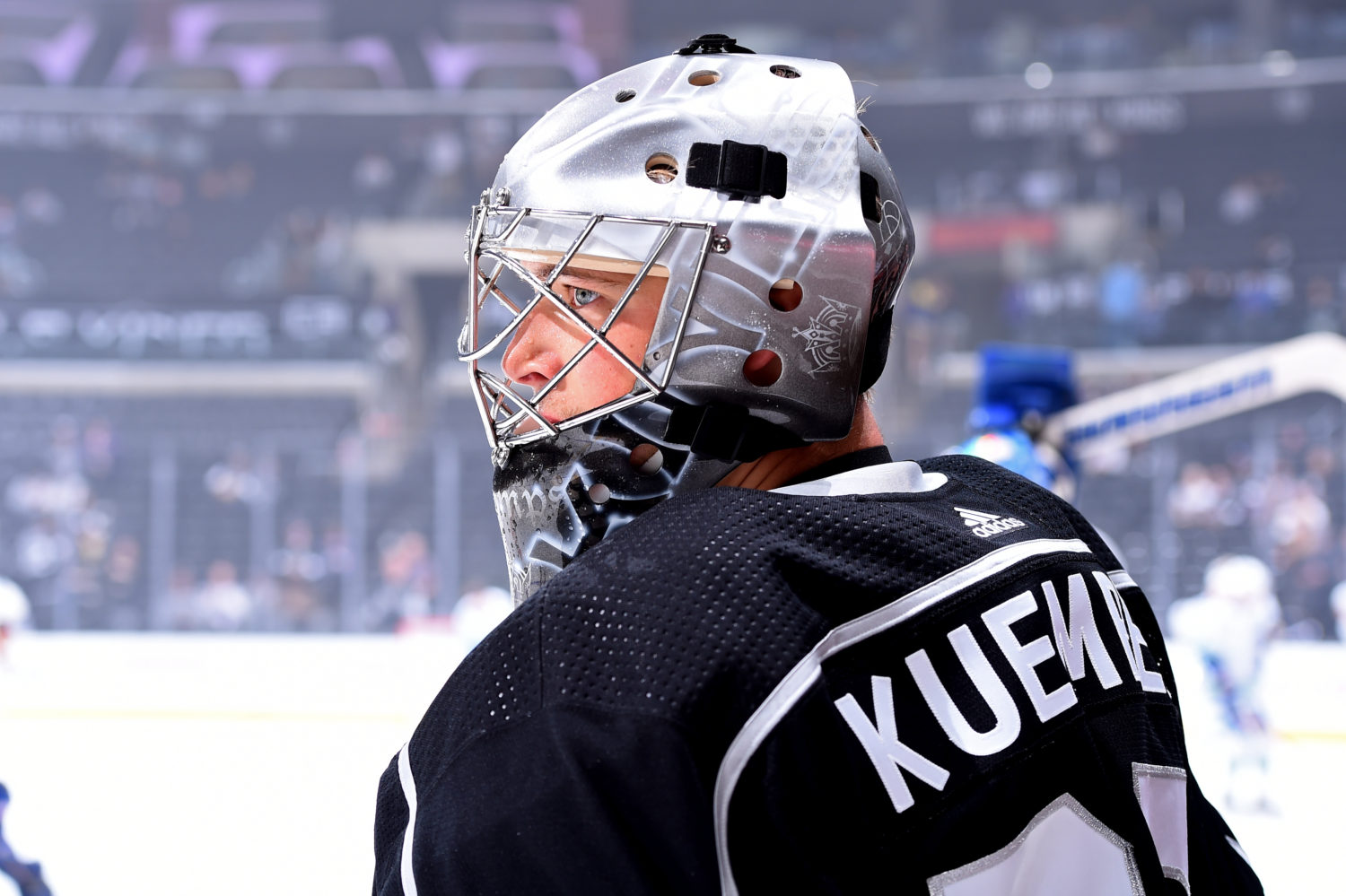