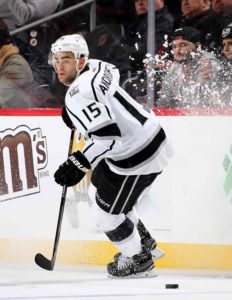 In advance of Sunday’s 2:00 p.m. deadline to submit qualifying offers to restricted free agents, the Los Angeles Kings signed RFA forward Andy Andreoff to a two-year contract with an average annual value of $677,500.

Though he received nearly two minutes of ice time beyond what he averaged the year prior, Andreoff wasn’t able to capitalize on his 60-game, eight-goal season in 2015-16. The scoring chances appeared to be there late in the year, and there’s never questioning his energy or fearlessness, but with two assists in 36 games, the production simply never came. With 98 shots on goal in 114 NHL games, he’ll also need to improve his shot rate over the duration of his contract.

One significant note in Andreoff’s favor is that he’s inexpensive. With a $677,500 cap hit, his salary is only marginally more expensive than the $660,000 qualifying offer he would’ve been due. He’s also versatile, and while it doesn’t appear that he’ll grow outside of a fourth line role, he’s able to slot in at both center (where he has a 52.0% career faceoff rate) and wing. Also, he’s still comparatively young at 26, so there’s the possibility that he can regain the encouraging trajectory and continue to build his identity as a player, efforts that seemed to materialize in his game late in 2015-16.

With Andreoff’s contract, the Kings now have $64.99-million committed to 17 players who are currently under contract for 2017-18, based on financials provided by Cap Friendly. That figure includes the contract for Adrian Kempe, but not Oscar Fantenberg or Jeff Zatkoff. It also includes Mike Richards’ cap recapture and termination penalties, as well as Matt Greene’s buyout. With that figure, Los Angeles has roughly $10.01M to allot to up to between three and six players (though likely six) via extensions, trades and free agency (and the highly unlikely scenario in which a 2017 draft pick makes the opening night roster).

Given that Jonny Brodzinski, Nick Shore, Justin Auger, Kevin Gravel, Michael Mersch, Kurtis MacDermid and Paul LaDue are also among the restricted free agents who will need new contracts, there appears to be an upcoming game of musical chairs that should elicit good competition at training camp. MacDermid, Auger and Mersch will no longer be waiver exempt. Nor will goaltender Jack Campbell, though the Kings will be looking to continue to bolster their goaltending pipeline, and that includes exploring both the free agent and trade market for a back-up.