Kings hire Lowry as an assistant under Stevens 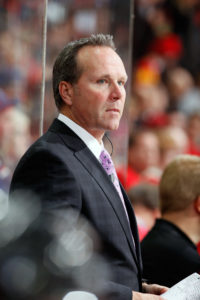 First, the quotes. Via Stevens:

“Dave has a wealth of experience as both a player and a coach and we’re excited to have him join our team. He played over 1,000 games in the NHL and was a great teammate as a player. As a coach, he’s really detailed, he relates well with players and he is driven to win.”

“I am very excited to join the Kings and John Stevens’ coaching staff. I have a great deal of familiarity with the Kings and the way they help prepare and develop players in particular and I believe I have a good understanding and appreciation of the professionalism of the LA Kings on the whole. I am also appreciative of the time I have spent with the Victoria Royals including Graham Lee as the owner, Cameron Hope as the general manager and my entire staff in Victoria.”

An inaugural Panther, Lowry totaled 10 goals and 17 points over 22 games during Florida’s Cinderella run to the 1996 Stanley Cup Final. He was also a captain between 2000 and 2002 with Calgary before his playing career concluded under Darryl Sutter. His final game as a player was Game 7 between the Flames and Lightning in the 2004 Stanley Cup Final.

One additional assistant is yet to be named. If the former coaching structure is any model, it wouldn’t surprise many if The Coach To Be Named is a former defenseman. Helene Elliott tweeted yesterday that Ulf Samuelsson is “a strong candidate” one week after Samuelsson was reported by Chris Kuc of the Chicago Tribune to be “the leading candidate” for the open assistant coaching position with the Chicago Blackhawks after Mike Kitchen’s dismissal in April. Samuelsson coached the AHL’s Charlotte Checkers in 2016-17 after serving as an assistant coach with the New York Rangers from 2013-16.

With WHL-Victoria, Lowry’s teams compiled a 209-124-27 record and advanced to the second round in three of his five years with the club, while his 2009 WHL-Calgary team lost in overtime of Game 6 of the WHL Championship when Tyson Barrie scored on Martin Jones in Kelowna, B.C.

“We are thankful for the time that Dave was behind the bench for our club. It was just a matter of time before he moved back to the NHL. Dave set a high standard and was an important part of building our program to where it is today. We thank the entire Lowry family for their commitment to our franchise, and wish Dave success as he takes another in his career.”