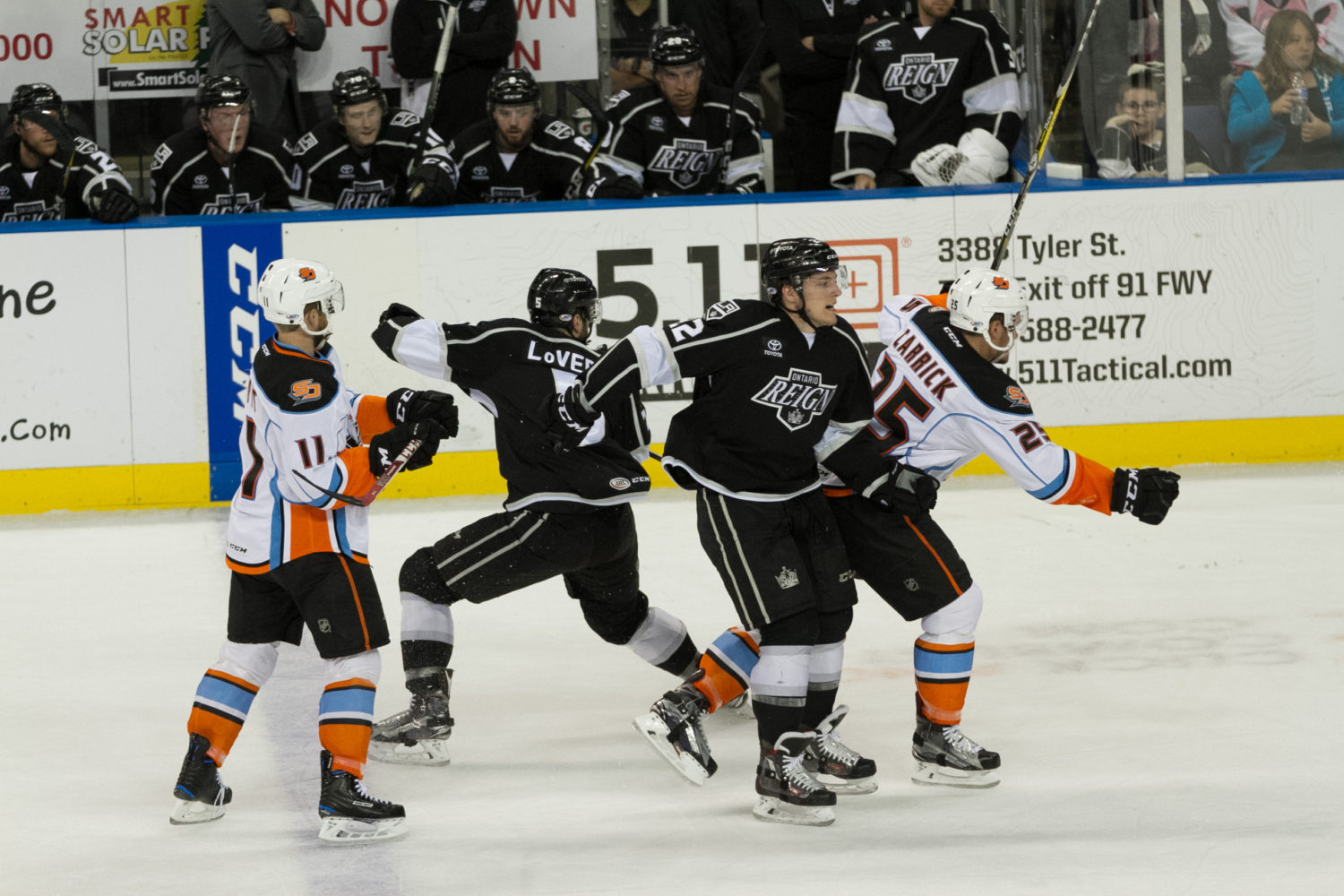 Justin Auger, on getting moved up to the top line, and “what it did for his confidence”:
Yeah I mean, I think it’s huge playing with guys like Henner and Brodzy. A lot of the times just getting them the puck, Brodzy knows every time it’s on his stick he’s shooting so I was just thinking go to the net and crash and bang and I know Henner is a good play-maker and he showed that tonight.

Auger, on the first goal he scored set up by Brodzinski:
For sure, I mean, he had two guys [inaudible]. For him to make that pass to me in the middle, it’s not a play that a lot of people can make so kudos to him for that and it got us started on the right foot.

Auger, on what the Reign will need to do to win Game 5:
Just play like we did tonight. I think right from the start we played a solid game. We knew they were going to come out with a push and just kind of weathering their push and coming back with our own.

Auger, on whether he had to “fight the urge to pull the trigger too early” on his second goal:
I mean, we’re thinking shot first. We’re putting everything on net. Stuttsy’s been talking about it all week, that we’re not passing up shots, so I think everyone’s shot first and when the opportunity’s right we’re taking those shots and if there’s a play to be made, we make those plays, too.

Auger, on breaking through against Enroth and how that might effect Game 5:
Yeah for sure. I think we’ve had trouble scoring this whole series. That’s obvious so putting a couple past him just kind of shows a light at the end of the tunnel where we know that we can beat this guy and we scored 3 on him tonight and just keep peppering him and going to the net and putting ’em in.

Auger, on whether having the win fresh in their minds is helpful with Game 5 in less than 24 hours:
I think so. We’re going to come to play however long the break is or whenever we’re coming back and playing our next game. But you know, it’s exciting. We’re just going to feed off the adrenaline tonight and just keep it going tomorrow.

Paul LaDue, on whether the 4-1 win provides any momentum heading into Game 5:
I think it kind of just shows us how we need to play to win. They’re going to come out harder than ever tomorrow after tonight so I think we’ve got to reset and completely refocus starting tonight and be ready to come out strong tomorrow. We had a strong first period today and we need to carry that on tomorrow.

LaDue, on his goal:
Yeah, I saw it go into Auger out front and I knew I had a lot of room out there so I just kind of sunk in and he actually made a great play and bumped it out to me and I saw a little lane and shot it through. I can’t remember who it was but someone got a good screen on the goalie and that helped out a little but yeah that was a huge goal and it felt great.

LaDue, on whether they tried to “lock it down” after his goal or pushed for more:
No at that point I think it was 10 minutes left so you just keep playing your game, keep making plays. You can’t really shut it down or turn it off at that point because then you’re giving them opportunities in our own end but I thought we did a good job of keeping the pressure on and we stayed in their end for a lot of the remainder of the third so that was great by us and like I said, we’ve got to take this game and we’ve got to learn from it and we’ve got to come out even harder tomorrow.

LaDue, on whether the objective was to “come out and put as much pressure on [the Gulls] as possible”:
Yeah, for sure, that was one of our strong points or something that we’ve been focusing on the last couple of days. They’ve had some good starts against us and we kind of needed to turn the page and turn it around on them and I’m sure they’ll be looking to come at us hard in the first tomorrow but we’re going to do the same thing.

T.J. Hensick, on the responsibility of being a veteran on the team heading into an elimination game:
Yeah, for sure. I think we can be frank here. We got called out this morning, guys that need to step up and make some plays, try and be the difference. I felt like everyone, in any way, found a way to do something. Faceoffs, block a shot, score a goal, make a play. I thought it was a big effort from everybody. Even the younger guys, too. All the way up. Soupy did his job straight on out to the D, to the forwards. I thought it was a great effort for us. It’s the best we’ve played in the playoffs and hopefully it’s signs for tomorrow.

Hensick, on whether they’ve gotten the “right mix” to the lines:
We hope so. I thought Auggy was as good as I’ve seen him all year. Dominant tonight for us. Huge game for us and probably the big difference for us, just finding ways to get pucks to the net. And Brodz was good, too. I thought our line was great and Brodz had some chances. He shoots the puck well, obviously. And then we had other lines. Kempe had a breakaway. I thought Kempe, Merschy and Backs were good, too. I mean, that’s the thing with our team, is that any given night someone can be the difference and who knows who it’ll be tomorrow but hopefully it’s someone on our side.

Hensick, on how many Game 5 or Game 7’s he’s been in:
Not enough actually in my career. This’ll be my first I guess Game 5 or Game 7 type of atmosphere and I’m looking forward to it. San Diego obviously has a hostile environment. We’ve got one win out of two, we’re going to need a second one there but we’re looking forward to the challenge. Head down there tonight, get some rest, and be ready to go.

Hensick, on whether having Game 5 less than 24 hours after Game 4 is advantageous to the Reign:
Yeah, I mean, you can think of it for confidence-wise – the way we played tonight can roll into tomorrow night but they’re going to be ready. I think we’ve got to be ready for the first five, ten minutes. I thought we were good tonight in our first five, ten minutes and they’re going to respond tomorrow, for sure. It’s a good team down there, it’s been an even series for the most part, and we’ve got to be ready. And I think we will be. It should be a good game.