How might the use of analytics evolve under Blake and Stevens? 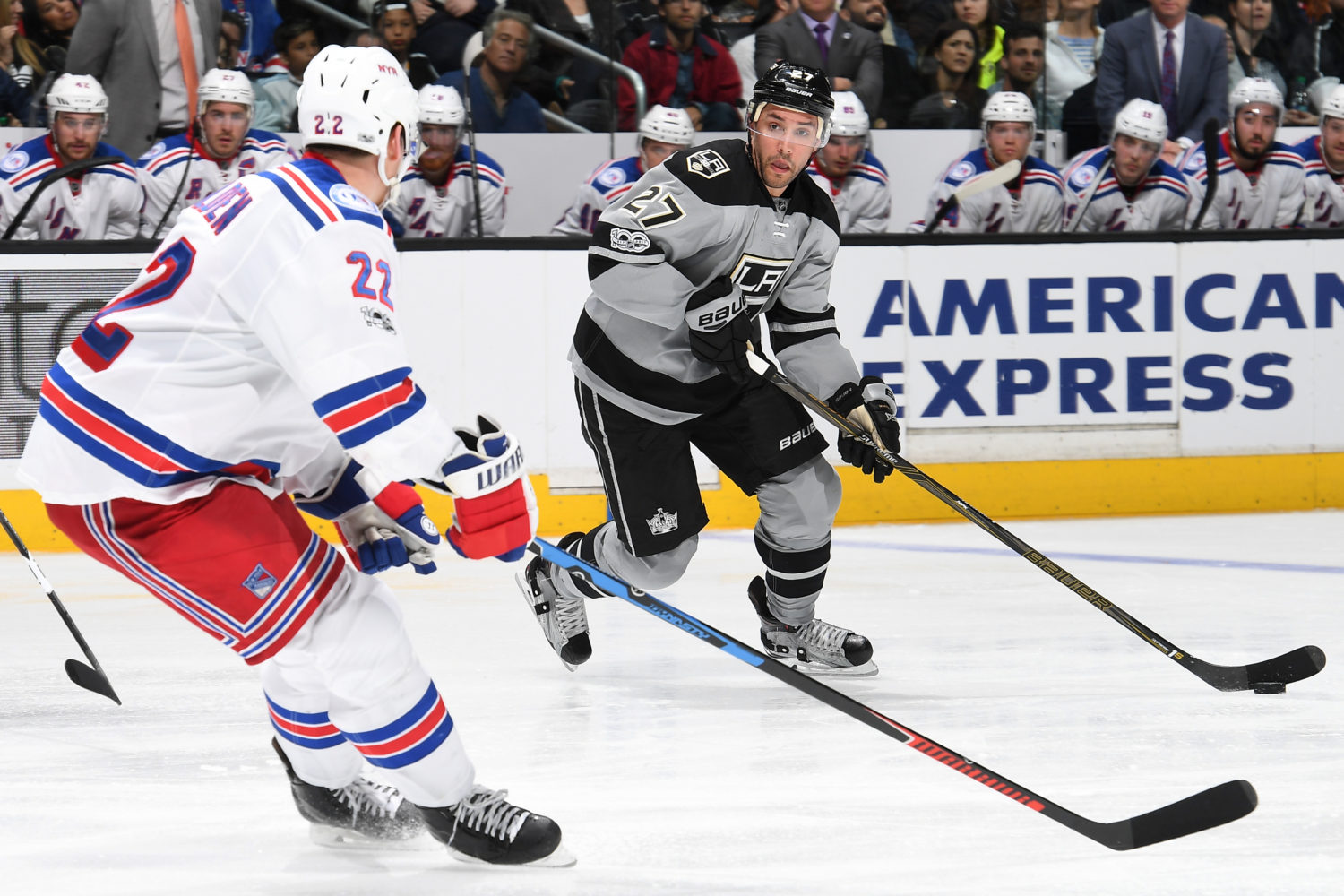 Darryl Sutter’s gruff exterior, his English pocked by uneven grammar, and even his unique agricultural background led many to place labels on him that weren’t necessarily accurate. While there may have been the outside assumption that he was resistant to change in hockey, he still understood the importance and means of interpreting advanced stats, and even though he spoke occasionally about “plus players” or “minus players” or on-the-surface numbers, he was also someone who read ample printouts, packets and books of data compiled by members of the hockey operations staff.

“We’ve used it for the last two years a lot,” he said at the beginning of the 2014-15 season. “We have specific things we don’t care to publicly talk about that we think are really important in those analytics, and they prove true over a period of time, over the graph of it. It doesn’t necessarily mean tonight it’s going to have an impact or anything, but after so many games against that team, or after so many home games, or after so many road games, or after a road trip or a home stand, it does. There is a correlation between how the coaches individually rate players to the analytics that we use.”

Sutter, like many in the Kings’ organization, doesn’t view those numbers as “the answer,” as he said, but rather as a reinforcement of many other criteria: Primary statistics. The in-person evaluation or “eye test.” The way the player takes to coaching and benefits from it. The way a player interacts with other players and allows others’ games to flourish.

So it’s not surprising that when John Stevens was introduced, there were discussions over advanced metrics and the way the team chooses to apply them. He referenced them repeatedly, as many do, as “analytics.” This may not be the most compelling story of the coaching change, but puck possession certainly tells a very valuable story about the Kings’ success between 2012-14, so it’s important to learn if there may be any tweaks to the way the organization, under Luc Robitaille, Rob Blake and Stevens, interprets the data it harvests. Clearly, if there’s anything indicated by the numbers that could have a positive impact on the offense, it will be studied.

“One of things I did when I sat down with John is we talked about the offensive game and he touched just briefly on a little bit of the analytic things that have come into our game and you need to look at all that but where our shots are coming from, how we’re generating shots off the rush, different things like that we’ve looked at,” Blake said. “We’ve been at the bottom of the league in that statistically throughout the last season here, so there needs to be an emphasis and a detail on the change in that aspect. Defensively, though, … I think it starts there. You go and you get the puck back and they’ll be things through the neutral zone, offensive zone that they can stress more in detail to lead to the offensive part. We were comfortable with what we came up with.” 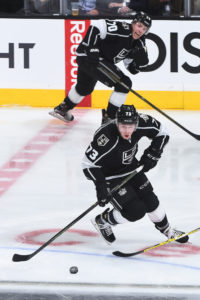 Blake was alluding to the team’s 54.5% five-on-five Corsi-for percentage in 2016-17, which led the league, and the team’s 6.26% five-on-five shooting percentage, which ranked last. While shot volume was one method the team relied upon under Sutter, there have to be ways to increase shot quality, as Blake hinted at. In the latter stages of Terry Murray’s tenure and throughout Sutter’s tenure as head coach, the Kings were a top possession team. Their cumulative 55.7% CF% since the start of the 2011-12 season is nearly three percentage points better than Boston, the team with the second highest possession rate.

“You take that in steps, whether you take it from the D-zone, you take the neutral zone or the offensive zone, then you start adding the analytics to what you think you’re seeing and you’re either going to be supported or it’ll go against it. I think it supported a lot,” Blake said. “We were at the bottom of controlled entry, goals off of controlled entry. We were near the bottom at getting the puck to the slot whether we were skating it or passing it so there were a lot of things that, the way goals are being scored now, that we weren’t having success in. So when we talk about a review at the end of the year, that comes into play. Then we sit and we see what the structure, the system, the detail that will be influenced to correct that. Whether we’re going to be at the top of the league or not, I can’t say that, but you don’t want to be a the bottom in those categories.”

As Stevens noted, the data isn’t the be-all, end-all of player or game evaluation.

“I mean, Darryl was very open to that and I just think you have to be careful with analytics,” he said. “I mean, you can’t let analytics monopolize your time and it shouldn’t be the only thing that’s driving decisions. It should support decisions, force you to take a look at things as we mentioned here when we started talking about the offense and that part of the game, but I think you have to figure out what’s helpful, what can be provided immediately so you can use it, because the game is happening so quick and you play so many games in such a short period of time. You’ve got to figure out what numbers are going to help you help the players and what numbers are going to help you apply to your team quickly and then you’ve still got to let the players play the game.”

By the end of the Sutter tenure, as the emotional pulse beat irregularly over the final 20 or so games, there were a lot of low-scoring nights in which the Kings checked well and operated in the offensive zone but ended up making a lot of goaltenders look like Vezina finalists.

There will be a continued inward reflection of ways the team can improve its output, as there would be any year, and there should be an open mind towards what the numbers and other factors indicate.

“You know, if Darryl and Davis and I were back together we’d still be looking at areas we’re trying to get better. I think sometimes when there’s a change like that, you get different people around you, you get different ideas because we’re adding new people to the staff, we’ll take a look at the analytics with the stuff we talked about offensively, and we’ll implement those ideas,” Stevens said.

While Sutter is no longer atop the coaching chain, and the coaches will strive to retain the checking and defensive success that the team has benefited from, efforts will still be made to make the team more effective in the time it spends in the offensive zone, and perhaps several new voices will provide a fresh perspective on numbers that had already been considered.

“Sometimes those change in ideas change things up a little bit and make it fresh,” Stevens said. “It’s just kind of the nature of our business, sometimes a little bit of change can make a big difference. But I do think and I’m very adamant that we need to continue to be really responsible defensively but I do think we need to explore ideas that our within the structure of how we want to play so that we can create more offensively.”

John Stevens, on zone exits and what other specific stats the Kings will be looking at:
Yeah, and there’s a lot of things, but you’ve got to be careful. Like sometimes, is it a volume number, or is it a percentage number? And some team might have a bad percentage, but the volume’s high, so you’ve got to make sure you know what you’re looking at and some of it is dictated by style of play. There might be a team that puck recoveries are at a low number so you’re not in your zone very much, so what does that tell you? So you’ve really got to be careful that you know what the context it is what you’re looking at and then that way you can use the information accurately. 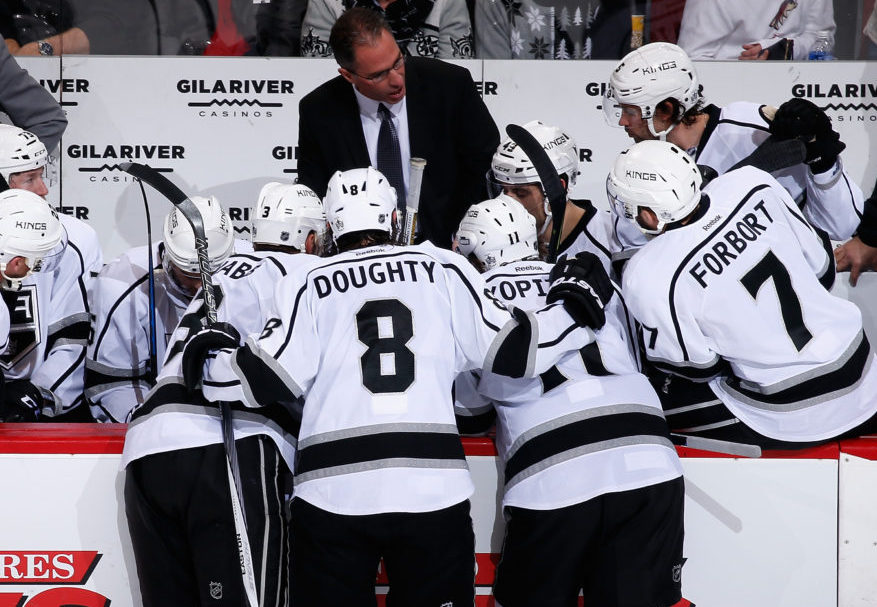