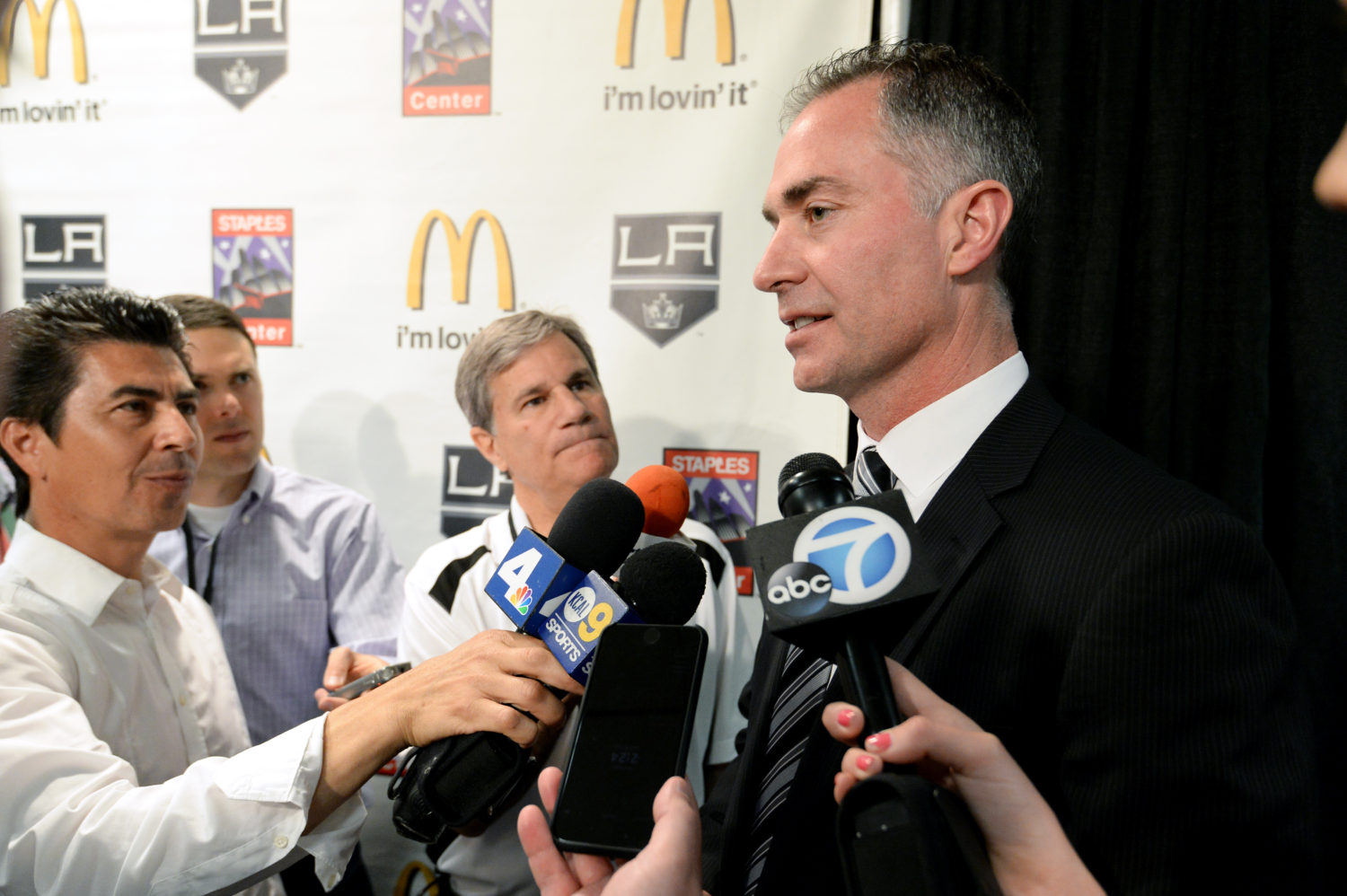 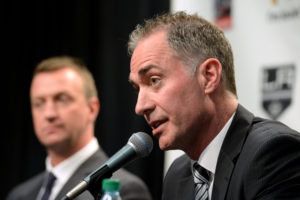 One clear factor in any evaluation of the Los Angeles Kings is that they’re going to have to score more. That was certainly a “topic of conversation,” as Head Coach John Stevens put it during his conversations with General Manager Rob Blake about how the team would function following the transition of the reins of leadership of the club.

With 2.43 goals per game, Los Angeles tied with Buffalo for the 24th most productive offense in the NHL.

While the Kings had been built in part as a team capable of making hits below the goal line and wearing opponents down along the boards, there appeared to be a concerted effort to focus more down the center of the ice and the front of the net at Tuesday’s press conference.

“I think part of our identity as a hockey team has to be that the LA Kings are a team that goes hard to the net, and quite honestly, if we lead the league next year in coaches challenges for goalie interference, I’d be really happy about that,” Stevens said.

That desire to operate down the center of the ice was articulated by Blake.

“I think down near the end of this season we started looking at philosophies on the way to games played,” he said. “You take that in steps, whether you take it from the D-zone, you take the neutral zone or the offensive zone, then you start adding the analytics to what you think you’re seeing and you’re either going to be supported or it’ll go against it. I think it supported a lot.”

The Kings have often been a team that places added value on how it exits the defensive zone and enters the attacking zone – see LAKI’s zone entries as an illustration, player-by-player, of who excelled and struggled in this regard – and found some data that raised some eyebrows.

“We were at the bottom of controlled entry, goals off of controlled entry,” Blake continued. “We were near the bottom at getting the puck to the slot whether we were skating it or passing it so there were a lot of things that, the way goals are being scored now, that we weren’t having success in. So when we talk about a review at the end of the year that comes into play. Then we sit and we see what the structure, the system, the detail that will be influenced to correct that. Whether we’re going to be at the top of the league or not I can’t say that, but you don’t want to be at the bottom in those categories.

Backing up a few sentences, Blake referenced exchanging the puck toward the slot in an effort to raise the volume of shots that come from higher danger areas. It was a topic that was also raised with Stevens.

“I think the middle of the ice has always been important to this team,” Stevens said. “When you look at the guys we’ve had down the middle of the ice – when we won with Kopitar and Carter and Richards and Stoll and Colin Fraser before that – I just think that center ice is a really important part of the game. It doesn’t always have to come from the defense if you relay plays off the wall, but everyone talks about analytics. Analytics tells you we don’t get enough scoring opportunities from the middle of the ice and that’s clearly an area where, whether it’s quickly off a transition forecheck and you’re going to try to get to those areas, you’re going to have people there more, and spend more time around the net. But it’s clearly an area we’re going to focus on.”

The desire to emphasize its focus down the center of the ice should fit well with a club that boasts top centers in Anze Kopitar and Jeff Carter. But Kopitar had a rough season in his first year as Kings captain, and as someone who had been tasked with maintaining a high shot volume and remaining strong down the middle of the ice, he finished with a career-low 5.16 5×5 shots per 60 minutes and too often gravitated towards the perimeter. He finished with 12 goals and 52 points in 76 games, marking the first time in 10 seasons he did not lead the club in scoring.

“I think there’s a lot that went in to Kopi,” Blake said. “First and foremost, he’s played a lot of hockey, too. I’ve had a conversation with Kopi the last couple weeks and a lot of it revolves around his off-season training and to look at the top players – the Toews’, the Crosby’s – and see what they’re doing off ice because there has to be an element, when you get to a certain age, to be able to play at a high level, the off-season becomes such an important factor. So I know our strength guys have met with Kopi and he’s got a real good attitude and understanding of what he needs to accomplish to get back to that high level.”

After burying the lede, let’s go back to that topic. Anze Kopitar has always been among the hardest workers and most conditioned players on a team that won two Stanley Cups. Darryl Sutter referenced it when he was coach, and privately, others have also shared observations about how hard the Kings’ captain works and how deep his buy-in is during regular season and off-season training.

But there was some disruption of his tried and true ways this year. Because of Olympic qualifying, his preparation for the 2016-17 season started several weeks early. After he led Slovenia to qualify for the 2018 Pyeongchang Games and Europe to the championship series at the World Cup of Hockey, he had already put mileage on his body before one game of the regular season had been played.

While those aspects kept several high-profile players, including Kopitar, from settling into their games early in the season, there was still perhaps the need for the star center to “adjust his training or adapt his training to a different style of game,” as Blake described.

“It’s a different style of game than it was eight years ago, and the quickness aspect has to be in there,” he said. “And listen, there’s a lot of things – the team wasn’t having success, I don’t think he had the success, he’s a new captain, there’s a ton of stuff that goes into it. Kopi will be fine. He’s a smart kid. He understands the game and he knows where he is and like I wanted to make sure he understands, he’s in that top group with all these other elite players, and there’s no problem looking at what they do. I’ve done it myself and Luc has done that certain times in his career. Look at the best players, see what they’re doing. You have to adapt as you go, but age and stuff come into effect.”

“I think Johnny touched on some of the guys that have been here a couple years now have to push to the core. The Pearson’s, Toffoli’s, Muzzin’s – Martinez is in that group – and they’ll push the core guys in Doughty and Kopitar to be better and then we’ve got to incorporate young players,” Blake said of the ongoing cycle of players reaching, maintaining and departing prime age and how it affects the leadership group.

But in terms of the game getting “quicker,” as many have stated, training and conditioning have to catch up with advances in how players are best prepared to use their speed.

“You have to adjust and adapt your training, and I think Kopi’s at that stage in his career, and he’s very open and the good thing is his agent is Pat Brisson who deals with some of these high end players that have been able to do those changes and incorporate that into their game, and I think Kopi will take full advantage of that,” Blake said. 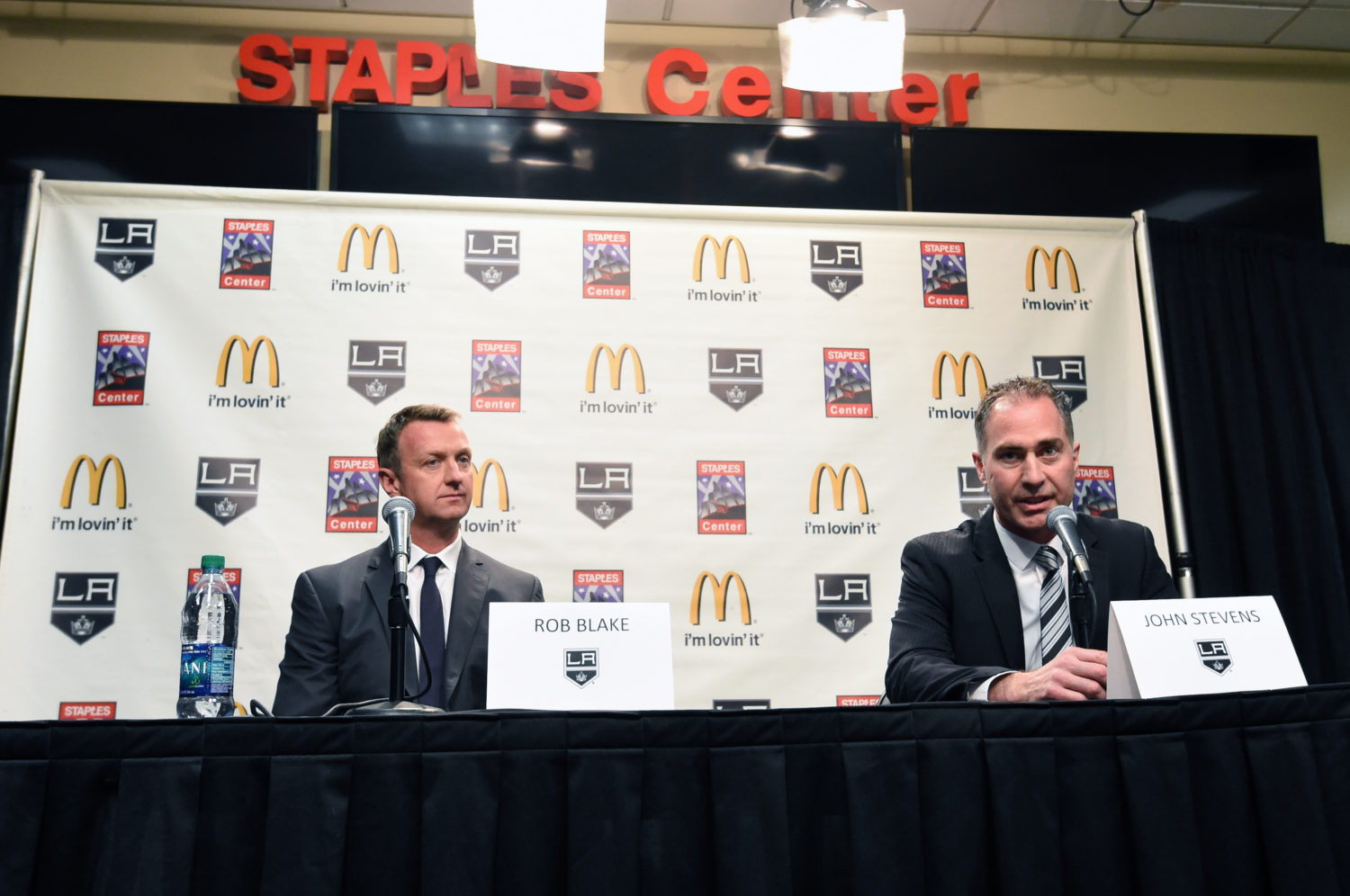