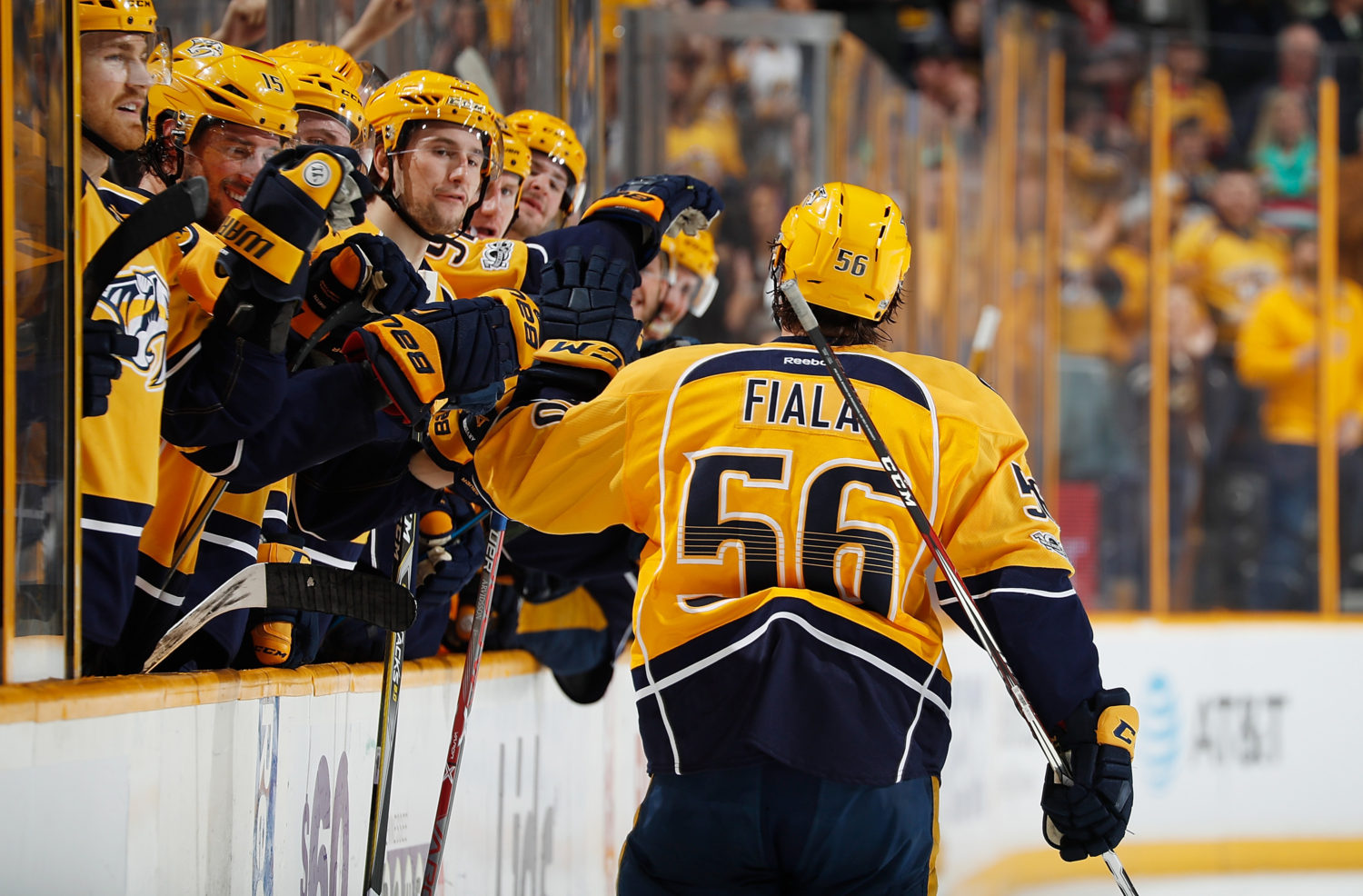 Good afternoon to you, Insiders. It is a beautiful day outside. I hope you are enjoying the sun on this bright Saturday.

-The Kings held an optional practice that featured a good amount of footwork in setting up shooting. “Got to have good feet if you want to be a good shooter,” Associate Head Coach John Stevens said. “Feet have got to do the work, right?” No goalies were on the ice, so a contingent of the team’s younger players skated around cones and took shots on a shooter tutor while the rest of the team took part in workouts, meetings and had lunch.

-With Nashville’s 3-0 win over Minnesota earlier today, Los Angeles’ “tragic number” dropped to one. Any point gained by the Predators or any point not gained by the Kings would result in an (e) next to L.A.’s spot in the standing. A better way of saying this: The only way Los Angeles could make the playoffs is if they win every single game the rest of the way, and Nashville loses every single game the rest of the way in regulation. The Kings have games remaining versus Arizona, Edmonton, Calgary and Chicago and at Anaheim; the Predators have games remaining at St. Louis, versus the New York Islanders, at Dallas and at Winnipeg. So you’re saying there’s a chance, etc, etc. I’m not even linking to that Dumb and Dumber reference. I’m linking to this one.

-Jonny Brodzinski, on facing top flight defensemen and goalies: “Bigger guys, tougher to get around, but that doesn’t change my game. I’m always just kind of working the puck low, trying to get body positioning and trying to get my shot off as much as possible. I think that’s my biggest threat so just trying to get open. It was nice yesterday with Kopi and Gabby just trying to find those seams and they were finding me every time so that was really nice. Now I just need to capitalize on the opportunities that I get.”

-Arizona knocked off NHL-leading Washington 6-3 in Glendale last night behind a pair of goals from Christian Dvorak, who is now up to 14 after having turned 21 in February. Louis Domingue started yesterday with Mike Smith ill, and I’m told Smith is still under the weather, so it’s not clear at this point who will start in net tomorrow night at Staples Center. Defenseman Kevin Connauton (upper-body) is close to returning, while 2012 Stanley Cup Champion Brad Richardson (broken right tibia and fibula) has progressed in attempting to return from his major injury but will not play again this season. “We look at them as a division opponent,” Stevens said. “They’ve actually played very well the last six weeks, I would say. They’ve had stretches where they’ve fallen off, but they may have played their best stretch of hockey. They’ve got some young guys in their lineup that have been given an opportunity, they’ve got size, they’ve got speed, they’ve got some really big power guys on the wings now, they’ve got a lot of skill down the middle and they’ve got an extremely mobile defense, and then their goaltending has been probably a strength of their team for a few years now, so even though they’re young guys, I think they’ve gotten a lot better. I think they’ve learned … how hard you need to play and they’ll be a tough division opponent, just like we’ve faced here on the road trip.”

John Stevens, on whether Jonny Brodzinski is getting more comfortable:
Well, it’s a work in progress. Certainly Jonny’s got a skill set that we like. He’s got really quick hands, he shoots the puck well, he’s got really good instincts and he’s shown the ability to be responsible, but I think the big challenge at this time of the year at this level is being responsible even 90% of the time isn’t good enough. It can be the difference in a hockey game, and I think there just has to be an understanding of the urgency of every shift, every play, every puck. When you’re on the ice against Sedin or McDavid or Domi, Doan, those types of players, you have to value how important every shift is, and I think that’s something that young players getting here get a taste of. You go into those buildings on the road and you understand just how important games are, how intense games are, and I think we can tell him about it, but until they experience it, they won’t quite understand it, so they’re certainly getting an understanding now after that trip. [Reporter: I was about to say – is that one of the first things that guys learn when they get to this level, is guys can play almost a great game, but if you make one mistake, it can really cost your team. Is that something that’s impressed upon?] At the same time, it is a game of mistakes, and I think if your preparation is where it needs to be, your mindset is where it needs to be, you come into a game and you apply yourself ready to go, mistakes are going to happen. It’s those mistakes where maybe you’re not prepared, maybe you weren’t ready to go in the first five minutes, maybe it was a faceoff where you went out there and you weren’t ready. Those are the things we have a problem with. Mistakes are going to happen. If your intention there is to do right thing, you’re prepared, your compete level is where it needs to be, we will live with mistakes, but it’s the other stuff that we won’t.

Stevens, on Arizona catching Los Angeles’ “attention” with their win over Washington:
Well, it wasn’t just that. We’ve had our troubles with Arizona already this year. They play hard, and like I said, if you look at algary, Edmonton, Anaheim, San Jose, they’ve got big guys on the wings that play hard, forecheck aggressively. There probably is one thing – they’ve got a defense that can really skate pucks out of trouble, and that’s something we’ve got to be aware of. They generate a lot on the rush and they really put a lot of pressure on you when they do get pucks in behind you. On top of that, their special teams have been an issue. We’ve had some trouble with their power play. They’re going to work hard. Like I said, even though that Keller kid’s there – whether he plays or not, I don’t know – they’ve got some young guys that are excited about the opportunity to play and they’re taking these games just as importantly as we are. We still have an opportunity to get into the playoffs, so they’ll be as tough an opponent as anybody else we’ve faced lately.

After saluting the crowd