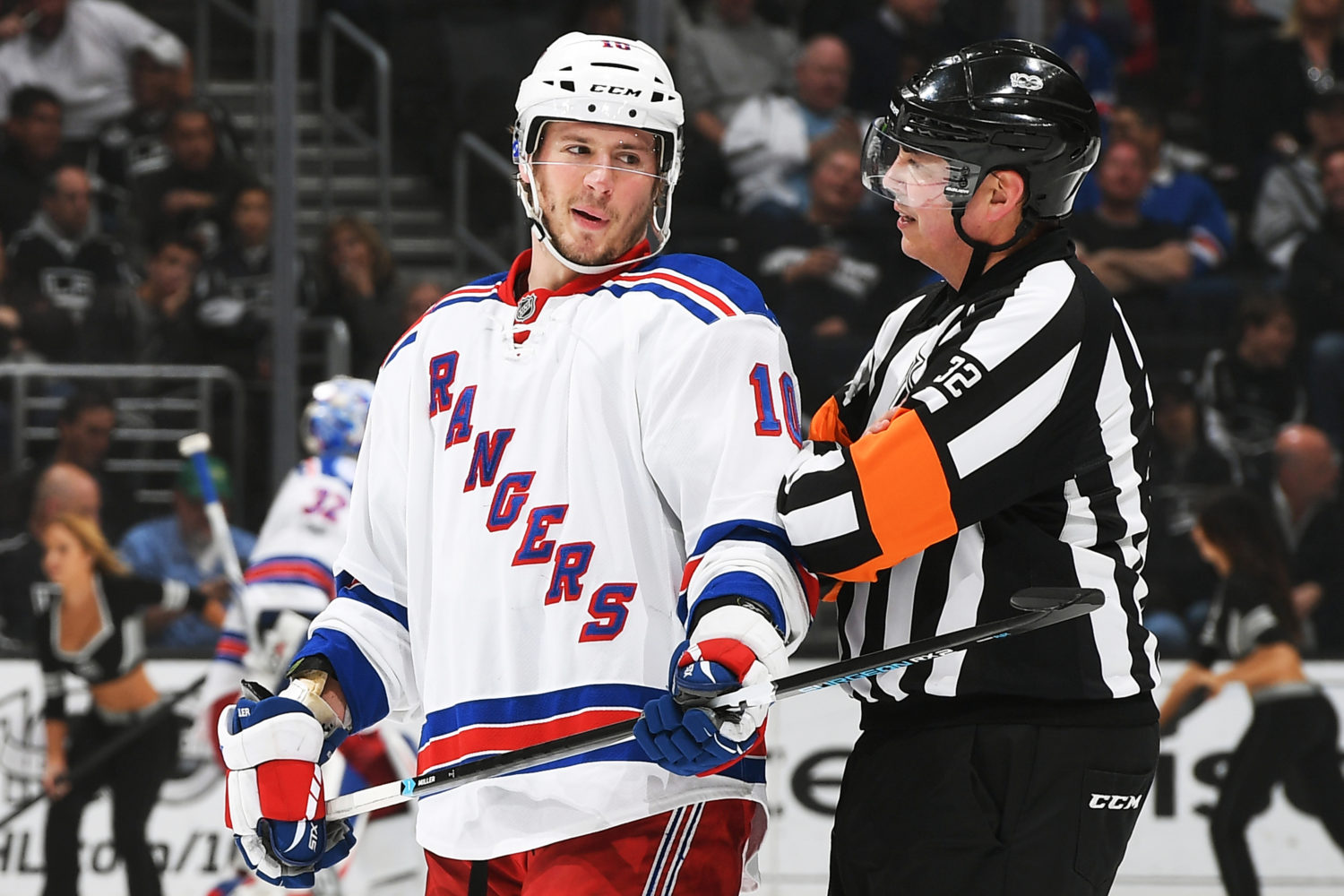 Alain Vigneault, on Antti Raanta’s game:
Well he, no doubt, made all of the timely saves tonight. We had a few turnovers and they got some grade-A looks and he made the saves. The difference is obviously from that end and the fact that we’re able to score a timely power play goal and then we needed to work on our penalty killing. Kreids took a couple penalties 200 feet from our net [inaudible].

Vigneault, on whether he liked the way his team played against a Kings team that has a “playoff style”:
I mean, there were some areas of our game that I liked and some other areas that I definitely think that we need to be better but we knew the type of game. A heavy, forechecking and puck possession game that they play. I thought for the most part in the first half of the game we did alright. In the second it flipped a little bit. That’s when our goaltender came in and that’s when our power play got us a timely goal.

Vigneault, on what he thought of his six defenseman with Girardi back in the lineup:
I mean, I liked the way our group played tonight. Dan, it’s his first game in a long time. He worked hard but there’s obviously room for improvement there but for the most part it was a step in the right direction for him and hopefully with the games that our remaining he’ll find his rhythm and his timing.

Raanta, on his save on Doughty in the third:
I think it was a misplay from our guys and he got the puck and kind of a surprise situation so I just tried to come be on the top of the crease and take angles away. He’s a skillful guy so I know what he’s going to do so I just tried to be patient and follow him and he made a good move and I was lucky enough to make the stretching save there and keep the puck out of the net so it was a pretty good feeling after that.

Raanta, on watching the game against a physical team in the Kings:
We knew that they were going to come hard. They our battling for a playoff spot and they will put everything on the line so we just wanted to play a good 60 minutes and I was just trying to focus on my thing. I was trying to get a good start and there was a couple good saves early on and you get the good feeling going and then you just build on that so it was nice to make those big saves and this time help the team to get the two points and a really good. Overall a little bit better than what the last couple of games have been.

Derek Stepan, on what makes the Rangers so successful on the road:
I don’t have the answer why we’re so successful on the road but I can speak for this game and I thought we had six D, four lines playing really well and on any given night you need strong goaltending and Antti was real solid for us back there so that’s – I mean, he got the hat tonight because he deserved it and I liked our game tonight.

Stepan, on the penalty kill stepping up in the third period:
Yeah we’ve been talking about special teams are important and we won the special teams battle.

Dan Girardi, on how he felt during his first game back from injury:
Yeah I knew it wasn’t going to be perfect but I just tried to go out there and work hard, block some shots, make some hits and just do whatever out there. I had a couple marathon shifts that didn’t help the old breathing out there too much but it was kind of, we were all kind of trying to make plays and they had a lot of good sticks out there. Yeah I think for the most part we stuck with it.

Girardi, on going 3-for-3 on the penalty kill:
Yeah we needed to have some big plays and obviously the difference in the game was the penalty kill. We had two big kills in the third and hopefully we can build on that from here and keep getting better on the PK.

J.T. Miller, on his linemates:
Yeah I thought we had a good jump early, especially in the first period. I think we did a good job of forcing turnovers [inaudible] in the second and obviously Grabs does an awesome job of finding a way to get open all the time so I thought it was a pretty good first game back and obviously to come out 3-0 is really good for the team.

Miller, on playing against a “big, heavy” Los Angeles team:
Yeah exactly. We always know what to expect playing LA and they’re pretty hard-nosed and straight lines and they’ve always had success like that so we kind of had to match their physicality and make sure we played the right way and take care of the puck when we had the opportunity.