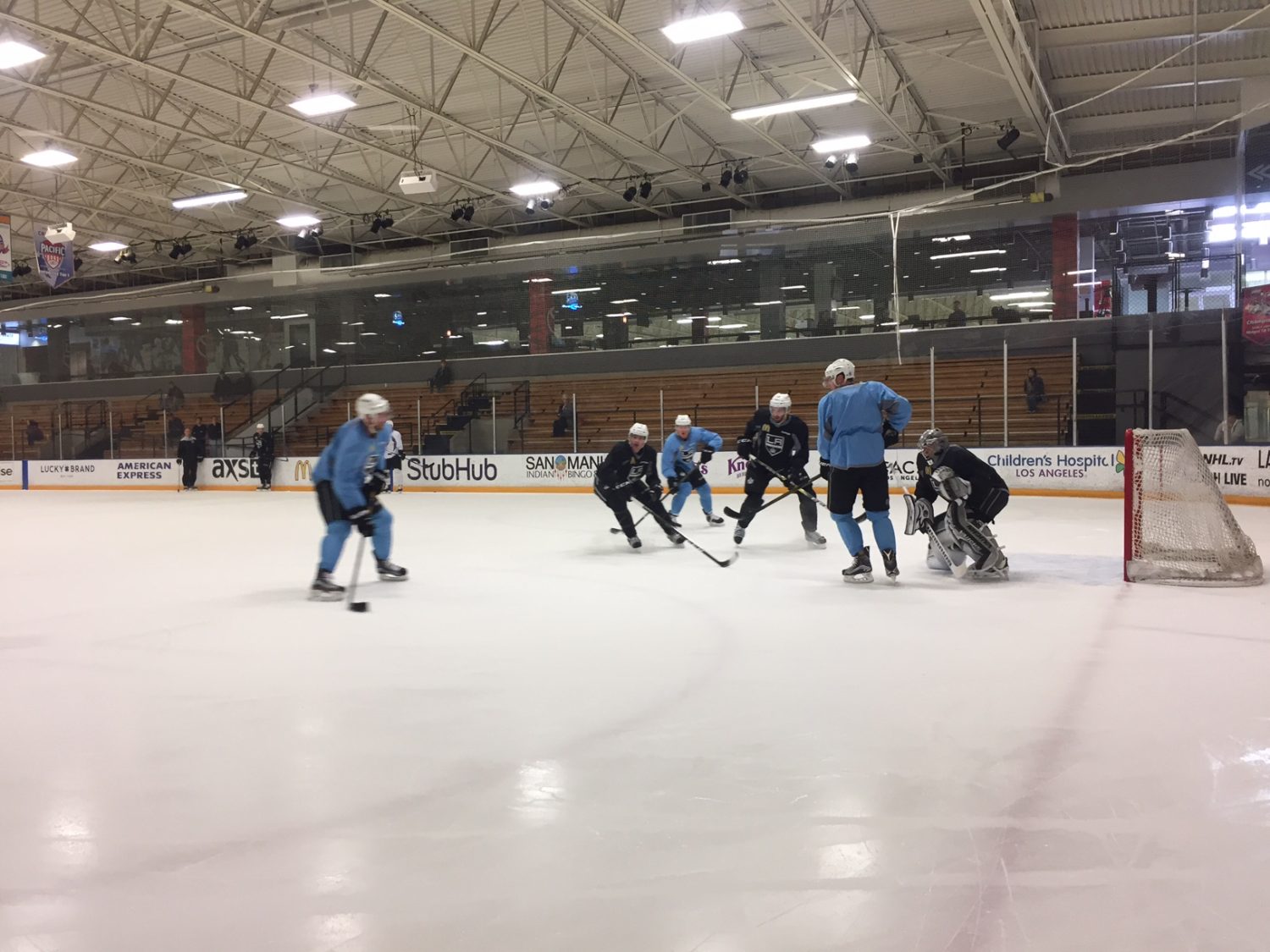 Good afternoon, Insiders, and thank you for bearing with a delay in content on a busy Monday across Los Angeles. After today’s practice, we took a detour to the Fox lot to shoot a special Simpsons-themed Kings Weekly segment that relates back to the late 1960’s Springfield Kings and features some incredible Pete Demers stories.

Great conversations with Lisa on Ice writer Mike Scully and producer Richard Chung as part of a special Simpsons-related #KingsWeekly that relates back to the AHL's Springfield Kings and several excellent Pete Demers stories! Fun episode put together by @jackawilson airs a week from Thursday, after Kings-Sabres.

Meanwhile, the Kings went through an extended practice in El Segundo this morning and aligned as such:

-Jarome Iginla didn’t skate because he was dealing with logistics related to his trade to Los Angeles, so Drew Doughty skated in his place alongside Anze Kopitar and Marian Gaborik. He enjoyed his temporary role as a forward. “It’s cool because I never get to work on on-on-one scoring like that,” he said. “As D-men, you just work on shots from the point all the time, which is boring, to be honest. It’s not fun not getting opportunities to try to score, because when you get ’em in a game, you’re not used to having ’em. I probably could have 10 more goals if I worked on my scoring a little more. I liked it.” The practice also featured the five-on-zero drills the goalies aren’t particularly fond of. “5-on-0 wasn’t my favorite part,” Doughty continued. “My favorite parts are the two-on-ones and the three-on-twos because you’re not making plays as a D-man in practice. The plays you’re typically making are just easy breakout passes and stuff like that, whereas at forward you’ve got to try to put pucks through guys feet or under their stick, like a sauce pass, so that was the most fun part for me today.”

-It was about as heavy of a practice as could be imagined at a point of the season when the replenishment of energy levels is important. But because Sunday was an off-day, and the team doesn’t play again until Thursday, Monday’s skate was expected to be the most extended of the week. In addition to rush and flow drills, there were odd-man rush drills, including the five-on-zero drills. Drills along the boards and in front of the nets had battle and compete elements, and after a conditioning skate segued into a stretch at center ice, several players trickled off the ice as others remained on for individual skill work. The ice was then cut, and then a small handful of players returned to work on their power skating with the use of restraining elastic bands, which teammates used to hold them in place from behind. There was a work-out element to the day’s conditioning, as well. “It was a pretty tough practice,” Doughty said. “Get the legs going, and get a little cardio in at the end. It’s nice to have a few days off, but we need to stay sharp and stay in shape, so not only are we doing stuff on the ice and having a long practice, we’re going to do some off-ice stuff, too.”

-Adrian Kempe was one of the boldfaced names from Saturday’s 4-3 loss to Vancouver and spoke about what he thought he did well in earning a pair of assists. “I got to play center, and I think I used my speed better,” he said. “I got to more pucks, and I think I used my speed with the puck well, so I think that was a good improvement from my side from the games before, so I just tried to play hard, and I think I won more loose puck battles. I thought I had a pretty good game, so I’m happy about that, but it’s tough, too. You’ve got to win.”

-Neither Jordan Nolan (undisclosed) nor Nick Shore (upper-body) skated on Monday. I hope to have updates on both players early this week.

-The Kings signed Kale Clague (2016 / 2nd round) and Austin Wagner (2015 / 4th round) to three-year, entry level contracts. Clague, who is still 18, is ticketed for a return to WHL-Brandon next season, while Wagner will try to earn a spot with AHL-Ontario as a 20-year-old, but is eligible to return to WHL-Regina as an overager if he does not lock down a spot. More to come on these players later this evening.