Bob Miller, the Voice of the Kings and the soundtrack to so many of our lives, announced on Thursday that he will be retiring at the end of the regular season. After broadcasting the season’s final two games – April 8 at Staples Center against the Chicago Blackhawks and April 9 at Honda Center against the Anaheim Ducks – he will step down as the Kings’ play-by-play announcer following 44 years and 3,353 live broadcasts as part of a career that included 57 years in radio and television.

“You pursued your life’s passion with greatness,” Kings President, Business Operations Luc Robitaille said during a press conference that was carried live on Prime Ticket and other digital outlets.

Miller, who underwent quadruple bypass surgery in February, 2016 and experienced a transient ischemic attack some three months later, suffered a mild stroke while preparing for a television broadcast during the NHL All-Star Game outside of Staples Center in late January, which led to his doctors to tell him that it was time for him to slow down his work and broadcasting commitments. In appropriate fashion for a Hall of Famer, Miller shared that prior to a trip to LAC+USC Medical Center following the All-Star Game health setback that Bobby Orr opened the doors to the ambulance to be able to send him his best wishes.

The video of today’s press conference, which took place inside the Chick Hearn Press Room at Staples Center, is below.

I also spoke with an emotional Jim Fox, who spoke about today’s news, and what Miller has meant to him, personally.

More, from a Kings press release:

Hockey Hall of Famer Bob Miller is in his 44th season as the “Voice of the Kings” – the first 17 years simulcast on TV and radio and the last 27 years as the exclusive television voice of the team – where he is joined for the 27th season by former Kings right wing Jim Fox for Kings games on FOX Sports West.

On November 13, 2000, Miller received the Foster Hewitt Award, as selected by the NHL Professional Broadcasters’ Association. This award, which recognizes those members of the radio and television industry who have made outstanding contributions to their profession and the game during their hockey broadcasting careers, is recognized by a plaque in the Hockey Hall of Fame in Toronto.

On October 2, 2006, Miller received a star on the famous Hollywood Boulevard Walk of Fame. On February 4, 2002, Miller was inducted into the Southern California Sports Broadcasters Hall of Fame, where he served as that organization’s President for five years. Miller has also been named the top Television Play-by-Play Announcer in Southern California 10 times (including 2015), and in 2014 he earned that club’s Special Achievement Award. In 2011, Miller was inducted into the California Sports Hall of Fame.

In 1998, to commemorate his 25 years of loyal service to the organization, Miller was honored by having the STAPLES Center press box named after him and was presented with a “lifetime contract” by the club, and in 1997, Miller was named as one of the six inaugural members of the Kings Hall of Fame during the organization’s 30th Anniversary celebration. The National Sportscasters and Sportswriters Association also named him the California Sportscaster of the Year in 1997 and 2002.

A native of Chicago, Miller, 79 (10/12/38), received his degree at the University of Iowa where he started his broadcasting career doing Hawkeye football and basketball games. Before joining the Kings, he worked professionally in radio and TV in Milwaukee and Madison, Wisconsin, and was the voice of University of Wisconsin hockey, football and basketball. In 1992, Miller received the honor of being inducted into Wisconsin’s Hockey Hall of Fame.

Along with his duties for the Kings, Miller’s voice has accented numerous TV and film projects, including “Cheers,” “Rollerball,” “Miracle on Ice,” “The Mighty Ducks” and “The Mighty Ducks 2.”

A resident of West Hills, Bob and his wife Judy have a married daughter, Kristin, a son Kevin, and they have two grandsons, Kaden and Brennon.

Luc Robitaille, Kings President, Business Operations and Hockey Hall of Famer:
“As far as any of us can remember, Bob Miller has been the Voice of the LA Kings. Watching a Kings game will never be the same.”

Dean Lombardi, Kings President/General Manager:
“Bob is a true pro. Off the ice, he has helped the Kings franchise play a critical role for our fans in his description of the play, and he has always displayed a great deal of competence – along with his signature sense of humor — through the highs and lows relating to the 50-year history of our club.”

Jim Fox, Kings TV Analyst:
“It has been an honor to work with Bob for the last 27 years. His professionalism and work ethic are very apparent and that definitely shows up in his knowledge of the game and the relationships he has with people involved in hockey, especially the fans. He has been a mentor to me in how to prepare for games and how to never underestimate the value of doing homework. As far as his call of the game, I have always marveled at his skill in communicating what is happening in the game, not only with his spot-on description of the game’s events, but even more importantly with his skill at finding the appropriate energy and urgency to cover each individual moment. Bob has never had to use a shtick or gimmicks to cover the game and that is because ‘he is that good.’ I have enjoyed his stories and joke-telling throughout the years and because I was right beside Bob for the longest lasting tenure of any current NHL broadcast team, I am most fortunate to have always sat in the best seat in the house. Congratulations to Bob, his wife Judy and their entire family.” 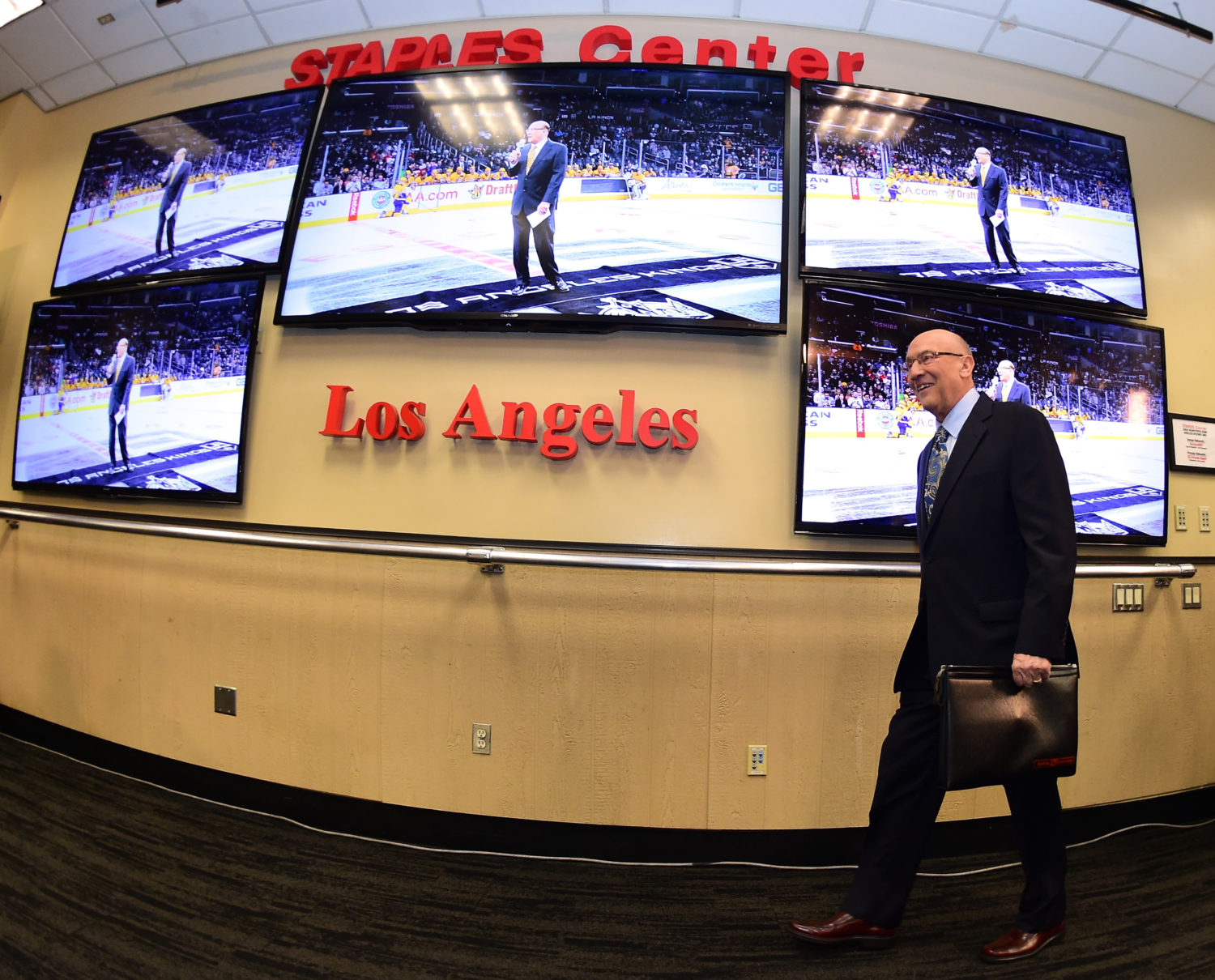 Nick Nickson, Kings Radio Play-by-Play Announcer and Hockey Hall of Famer:
“Bob Miller is the consummate professional. The passion and dedication he has brought to Kings games over the years is unparalleled and has endeared him to Kings and NHL fans everywhere. It has been an honor to have worked with and alongside him for 36 years. I consider him a true friend. He will always be the ‘Voice of the Kings.’”

Daryl Evans, Kings Radio Analyst:
“Bob Miller stands alone. Hearing Bob call the games with his passion and pride for his profession is something I will always remember. It has been an honor to have had the opportunity to work with Bob over the years and I am so happy he was able to hoist the Stanley Cup. Congratulations to you, Bob, on an amazing career…one of we can only dream about having. Bob Miller – a legendary Hall of Famer.”

Marcel Dionne, Hockey Hall of Famer:
“Retirement has finally come for Bob. Wow. His career has been a great one. Your name is in the Hockey Hall of Fame, you have two Stanley Cup rings, you have a great wife and beautiful kids and grandkids. You are one of the nicest and kindest people I have ever met. You are a true professional — during hard and good times — and the loyalty you had with different ownerships over the years is second to none. Your dedication to the fans of the Kings has been unbelievable and everybody will miss you on the air. Now I am looking forward to going to a Kings game and have you sitting with me so you can tell me again and again all the great stories of your great career. You are a funny man and I love you dearly. All the best to you my friend.”

Rob Blake, Kings Vice President/Assistant General Manager and Hockey Hall of Famer:
The term ‘Bob Miller, Voice of the LA Kings’ will always go hand-in-hand. It has been a great pleasure to hear your voice call so many Kings games over the years, Bob. Congratulations to you and Judy.” 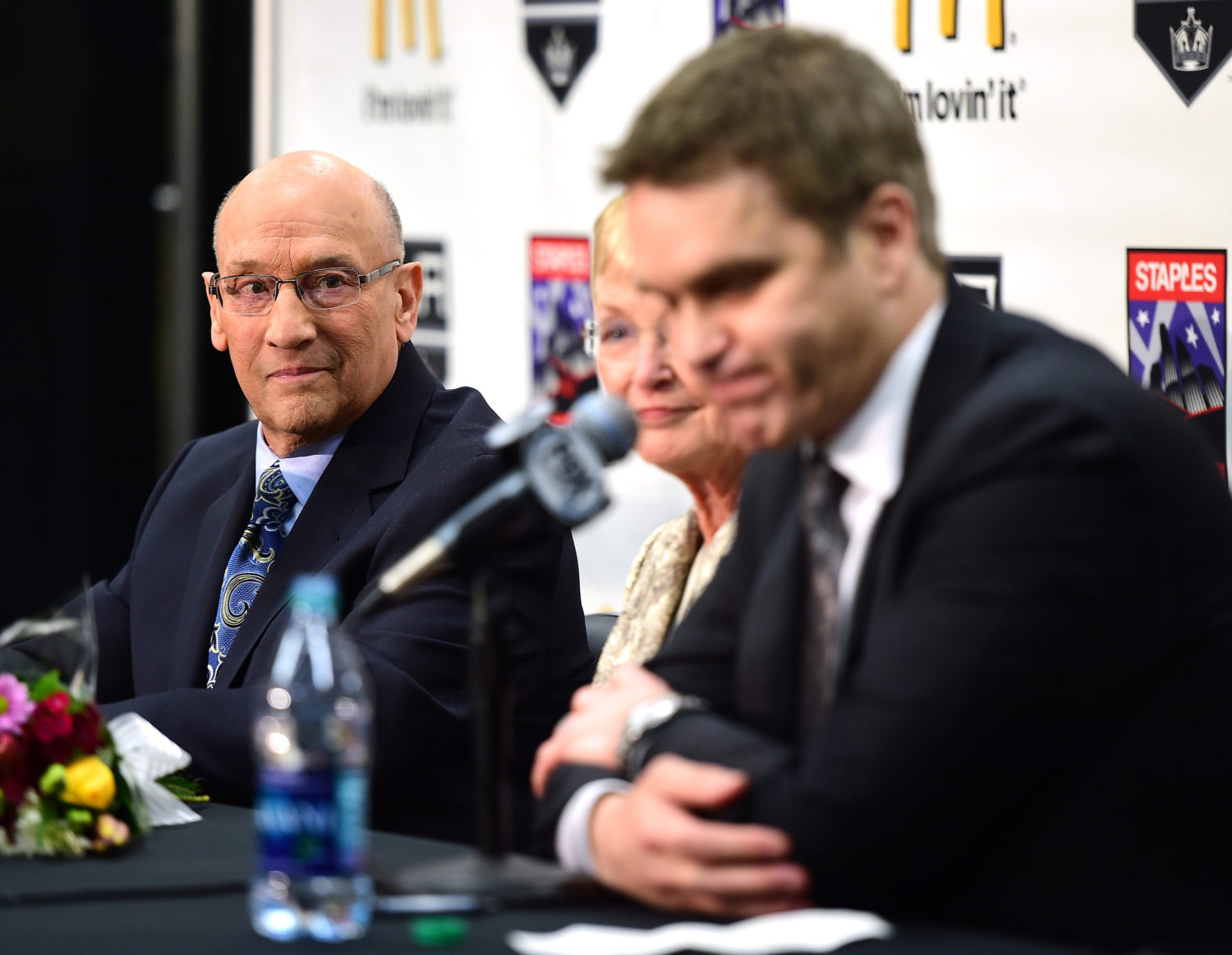 Rogie Vachon, Hockey Hall of Famer:
“Congratulations on a wonderful career, Bob. Nobody will ever call a hockey game the way you did for so many years. I am proud to be your friend. Enjoy your retirement as it is very well deserved.”

Dave Taylor, Kings Hall of Famer:
“Congratulations Bob on a tremendous career. You have represented the Kings, the City of Los Angeles and the NHL with professionalism, integrity and a great sense of humor. Congratulations to you, Judy and your entire family from myself and my wife Beth.”

Kelly Cheeseman, Kings Chief Operating Officer:
“Bob is an icon in the history of the NHL and Los Angeles. We have been blessed to be in his presence and have his voice lead us for our first half century of Kings hockey. He and Judy have been so gracious to allow us the honor of having Bob in our lives nightly for so long. We will miss them dearly and wish them the joys and relaxation of retirement.” 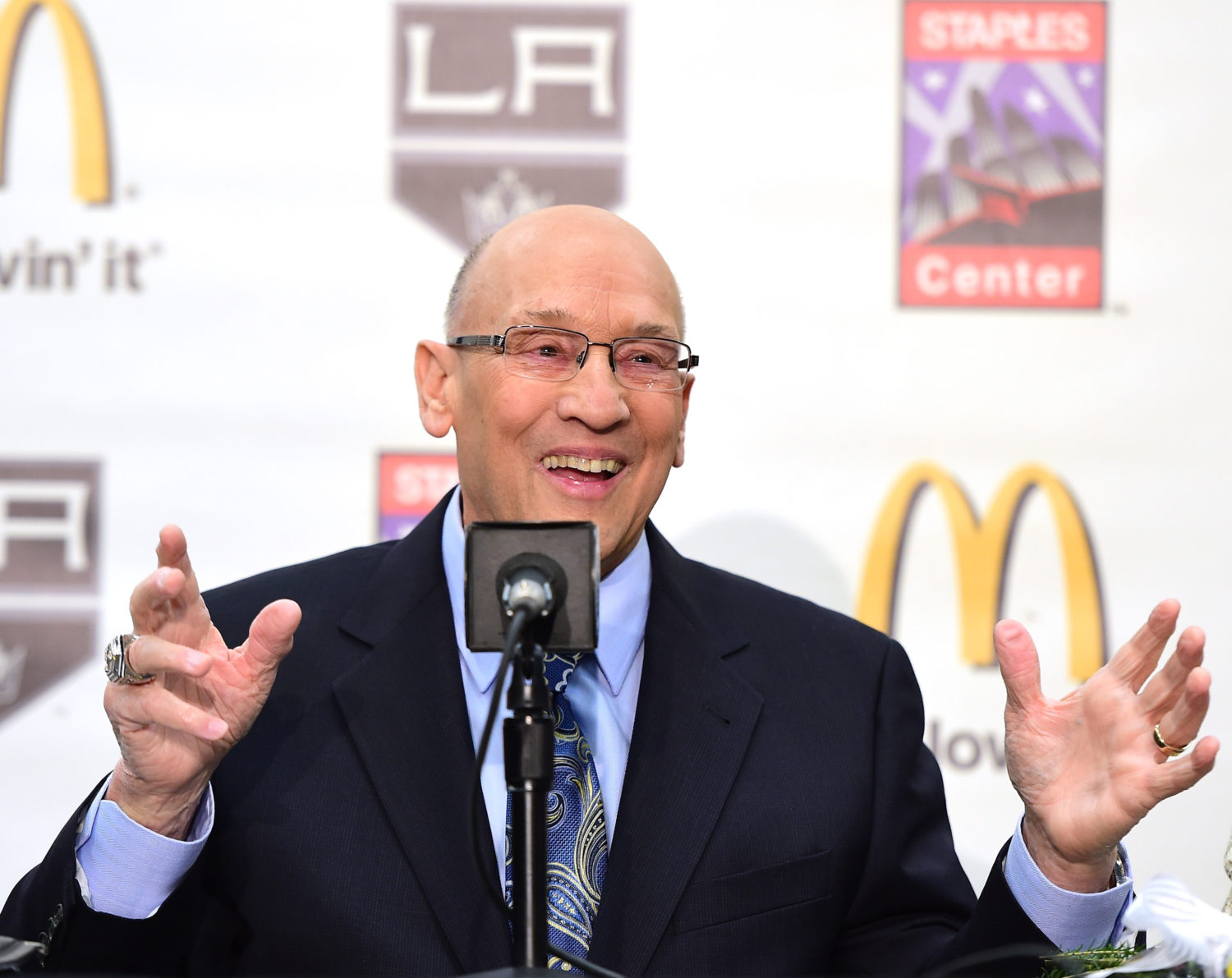 Michael Altieri, Kings Senior Vice President, Communications and Broadcasting:
“Being able to work closely with Bob during my 21 years with the Kings is one of the true joys of my life. He is an icon in the broadcasting industry and his legacy will stand the test of time. More importantly, his integrity, character and genuine care for others has always been a tremendous influence on me. I am immensely happy that Bob has reached this decision at a time when he can enjoy retirement and continue to remain a part of our organization. I look forward to many, many more good times with him.”

Patrick O’Neal, FOX Sports West Host/Reporter:
“What Bob has meant to my career as a broadcaster is immeasurable, as every game we worked together was a chance for me to learn from his years — and years — of HOF experience. But it’s our friendship and those moments of time we shared on the road that will always mean the most to me.”

Alex Curry, FOX Sports West Reporter:
“What I love most about Bob Miller is the passion he has for the game, and the love he has for life that you can see and hear in every broadcast or conversation he has. Bob has that special gift of lighting up a room the moment he walks in and brings out the best in everyone he encounters. Bob Miller is a living legend, the best in the business and I feel so blessed to have had the privilege of working alongside him for his last five years with the Kings.” 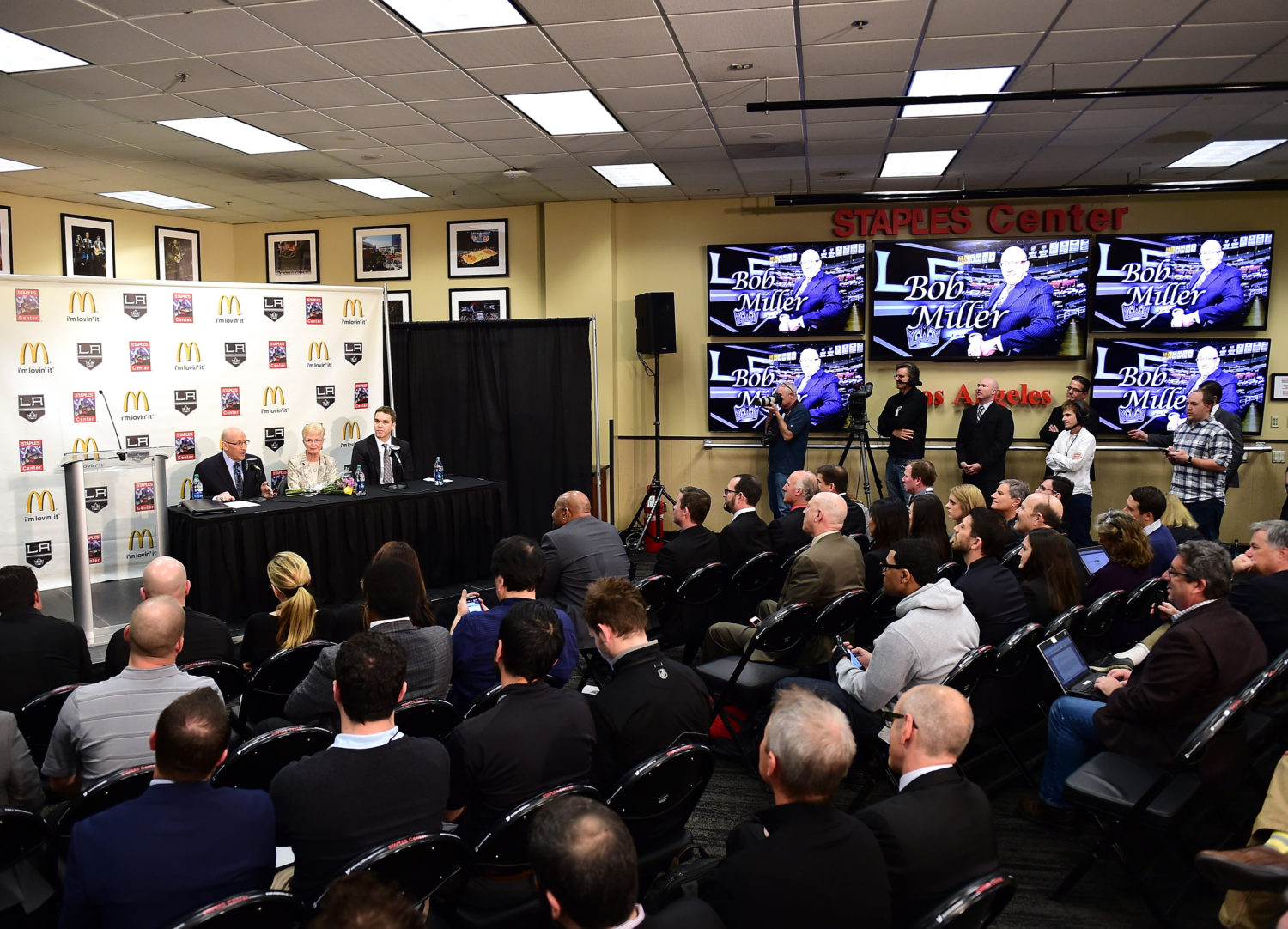 Jiggs McDonald, former Kings Broadcaster and Hockey Hall of Famer:
“I have total respect for Bob’s decision. Health is number one. While he will miss being in the booth or around the arenas and the guys, the Kings television audience will miss him more. Bob’s verve and personality, and his love of the game was evident in every broadcast over these past 44 years. He established a level of excellence that made him synonymous with Chick and Vinny in Southern California.”

Pete Weber, former Kings Broadcaster:
“Bob Miller was the one who showed me how to prepare as a professional and I could not have spent the more than 35 years ‘post-Bob’ in this business without his life, hockey and broadcast lessons. He taught me how enjoyable this life can be and to relish it. I will be forever grateful for that. Now it’s my turn to ‘pay it forward.’”

Rich Marotta, former Kings Broadcaster:
“It is rare to find the combination of professionalism, talent, knowledge, humor, enthusiasm and humanity as the Kings and Los Angeles got in Bob Miller. He has brought all those attributes to the broadcast booth and has brought them every night. Bob is genuinely enthusiastic about every game, and his love for the game always shines through. On top of that, his preparation is always impeccable. He has never mailed it in. The city of Los Angeles has been blessed with great broadcasting talents, and Bob Miller ranks with the giants.”