AHL President and CEO David Andrews stopped by the Inland Empire for Friday night’s Gulls-Reign game and spoke on a variety of league topics.

Since the league has shifted West, there’s been general interest about one of the California franchises hosting an All-Star weekend, but right now the AHL is in a tough spot as far as finding a destination for next season. The last two All-Star festivities have been hosted by Eastern Conference teams (Syracuse and Lehigh Valley).

“We are interested in entertaining California for the next one,” Andrews said. “We’ve actually got two or three California teams who would like us to wait a year. We aren’t able to make a determination about All-Star until the NHL decides what it’s doing with the Olympic games. The window for us to play our All-Star game in an Olympic year is when they’re over there because there’s an opportunity for us to have our own space. If they don’t go then we’re going to have to work our way into their All-Star break as well. Until we know what they’re doing we really can’t commit to any community and no community can commit to us because we don’t know what the dates are. So it’s holding us up a little bit.” 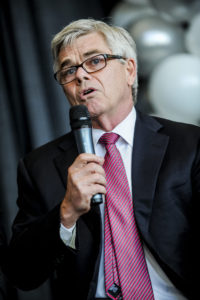 It’s a common occurrence for the AHL in general to have its ways dictated by the NHL and its NHL partners (more on that below). With Las Vegas’ expansion team, there’s also opportunity for expansion in the AHL as well.

For a second straight season, an outdoor game was held in California. Andrews was asked if that trend is something he plans to have continue. The Reign of course played in the Outdoor Classic in Bakersfield in early January and the teams played through a heavy downpour.

Could the Reign be next to host an outdoor game? It doesn’t seem likely.

“Actually our outdoor games are driven by our clubs. We’re like an innocent bystander,” Andrews said. “They ask us if they’re permitted to do it and when they’re permitted to do it and we try to work the schedule to help them and then we send people out to make sure we’ve got the right integrity of competition if you will, which was a bit of a challenge this year with the rain up there. I expect we’re going to have an outdoor game next year back East but it’s really driven by the teams. We are not driving it. We’re not taking the risk and we’re not really doing much other than trying to help them.”

He also had some high praise for the way the Reign franchise is operated behind the leadership of its president Darren Abbott. Ontario is currently sixth in the AHL for home attendance, averaging 7,959 fans a game.

“We knew it was a good market in the ECHL and I think we believed that the L.A. Kings had some real currency out here as well,” he said. “Bringing the Kings together with this marketplace and bringing Darren Abbott out here, he really knows what he’s doing, I think we felt it would be very successful and it certainly has been. I spent some time with him and his staff today and you can see why they’re successful. When you meet the people that work here and work with Darren, they’ve had a good-sized staff and really energetic and talented group. When you see that, and you see the right marketplace and a good building, generally you’re going to see some success.”

Below are more quotes from Andrews:

On possible expansion:
Las Vegas is going to join the NHL next year as you know and we’re probably going to add a 31st team. I would say it’s 50-50 right now whether it will happen for next year or not and it’s unlikely to be a West Coast market. We just don’t have a market at this point that’s shown any real interest. I would expect that if we have a 31st team it will probably be in the Midwest. It won’t be Kansas City, which was rumored. But we still have a possibility, probably like I said 50-50, that we’ll have a team next year. Otherwise someone’s going to be sharing. [Reporter: What’s the likelihood of that. Do you talk to GMs about that, if they’re interested?] It’s not my responsibility to find places for them to put players but it is my responsibility to deal with the team that’s going to have to spread them around if that happens. So, we’re hoping that’s not the eventual outcome this year but it could be. So we’re working with both Vegas and with another NHL team who could be the one that is left without a seat at the table. Hopefully it will all work out but if it doesn’t I think we can get through a year.

On how much expansion is driven by NHL franchises or cities in general that want a team:
I would say it’s probably 50-50 but it depends. We’re now at a point where 18 of our franchises are NHL-owned. And part of that has been driven by NHL teams wanting to locate their teams closer to themselves and they only way they could see to do it was to buy a franchise and to move it. But I think if we had an ownership group surface … if it was an open market and an ownership group surfaced, I expect they would have a fairly easy time attracting a Western-based NHL club to move their players there. So, it’s a little bit of both. We’ve had a lot of movement over the last three years. I couldn’t give you the exact number but it’s probably close to half the league. When you consider we moved seven teams last year, we’re moving two more next year, we moved a few the year before, and almost all of that movement, I think all but one of those moves resulted in that American League franchise being closer to the NHL partner. So, that’s a big driving force. It’s what brought us to California, it’s what brought us to Tucson this year, it’s what’s moving our Newfoundland franchise to Montreal, it’s what moved our Albany franchise up to Belleville, Ontario. It’s not a grand scheme on our part it’s reacting to the needs of our partners in the NHL. It’s worked out well here. It’s really been good for us in California. Who knew San Diego would be as good as it is? I think we probably knew Ontario was a real, strong market but it’s been good for our league.

On whether scheduling may change to see all teams play the same amount and what drives the number:
Our Board of Governors drives it. I try to drive it to a certain extent. I would like us all to play a constant number of games. I think it looks odd. The perception is weird. But there is very little concern. We bring it up and we vote on it every meeting pretty much and say, can we get ourselves to a consistent 72-game schedule? We haven’t really gotten close to doing that yet. The group out here are very happy at 68 games. I don’t think we would ever get the rest of the league to 68 or it’d be a long time before we do because it has some real revenue implications for a lot of markets and there are a lot of NHL teams who think that’s too few games. I think the consensus is that 72 is the right number from a player development point of view with most of the teams in the East, but as weird as it is I can honestly tell you we get very little push-back about it. We don’t get push-back from our teams that are playing more games. They don’t feel it’s a real significant advantage. If you look at last year’s schedule, the California teams played about the same frequency of games after Christmas as the rest of the league. They only thing that’s really weird and I think fans don’t like the whole points percentage thing, trying to figure out where people sit in the standings and what does each game mean. It’s difficult for fans. But I think from a competitive point of view there’s very little conversation with us that says, ‘you know what, we’ve got to fix this because it’s competitively unfair.’ I think we’re going to live with it until I can somehow coerce these guys into playing some more games or coerce some of our really successful franchises in the East to play less. The one thing you will see with scheduling next season is we are going to get our scheduling a lot earlier. We made some changes to our process. I expect that we’ll be at least a month and probably six weeks earlier getting our schedule out, which is going to be a big help to all of our teams across the league. There’s a much longer selling season and it also helps protect days for us. You think about waiting til the NBA schedule’s out, during that couple of months that we are waiting a lot of our buildings lose dates to concerts, trade shows or whatever. It will be really good for the league and you’ll also see some realignment next year. We don’t know exactly what yet because we’re waiting to see if we have a 31st team coming to the West, but we will see some realignment as well.

With Alex Lintuniemi injured and out of the lineup, it’s paved the way for rookie Damir Sharipzianov to get regular looks.

“Just trying to not get over excited, was every game watching from the stands,” Sharipzianov said last week. “I wanted to play, wanted to get in there, help the team out to win. When I get the chance just got to make the most of it and show the coaches that I can play how I can play and help the team win.”

Sharipzianov has been mostly paired with captain Vincent LoVerde (who’s now out due to a mid-range injury), a brace of a player that Stothers uses with greener blue liners, but the 20-year-old Russian has held his own. Most notably, the 6-foot-2, 203-pound Sharipzianov plays with a hard-hitting physical presence that can only compare to teammate Kurtis MacDermid.

For the Twitterers out there, if you don’t already follow @hockeynightinsd you may want to do so. It’s run by Jamie Lynch, who shoots unique video in his coverage of the Gulls. He caught a great angle of Sharipzianov’s crushing hit on Corey Tropp from Feb. 4. It’s at the :41 mark of the video below.

THE KID IN CAMPBELL

After last Tuesday’s practice had wrapped up and players were staying on for extra work, Stothers hollered at his Iron Man goalie Jack Campbell to get off the ice. When Campbell defied his coach, Stothers joked back saying, “Three more minutes? You sound like my grandson.”