February 6 practice notes: Budaj third star, no Nolan on trip, You Can Play 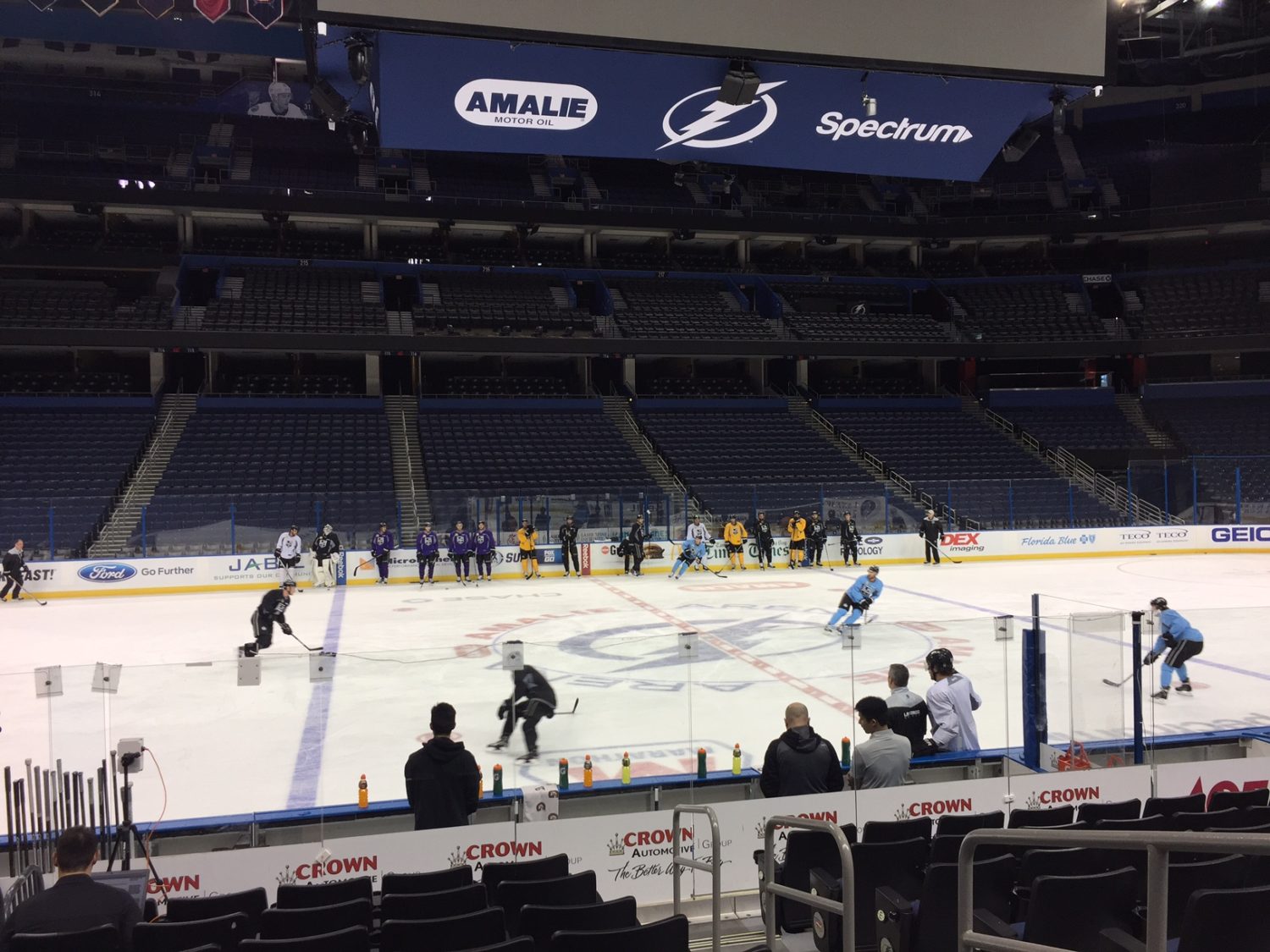 Good afternoon from the team hotel, which is in walking distance of Amalie Arena. On a 75-degree day in the middle of Feburary, that’s not an awful combination.

The Kings practiced at 2:00 p.m. at the home of the Tampa Bay Lightning and aligned as such:

-There didn’t appear to be any changes from the lines shown yesterday. On the defensive end, Paul LaDue’s debut may have to wait at least an extra game, if the order of the defensive rushes were any indication. The first seven rushes were: Forbort-Martinez, Muzzin-Doughty, McNabb-Gravel, Forbort-LaDue, Muzzin-Martinez, McNabb-Doughty and Gravel-LaDue. Jonathan Quick skated, though Peter Budaj and Jeff Zatkoff were more active in their respective creases. Again, there’s no acceleration in Quick’s timetable. “He’s on his schedule and he gets another five-day break coming up, so it’s a pretty good schedule for him,” Darryl Sutter said.

-Peter Budaj was named the league’s Third Star of the week by virtue of a 3-1-0 record, 1.62 goals against average, .930 save percentage and shutouts against the Avalanche and Flyers. This is the first Three Stars honor since Jeff Carter was named the Second Star on December 26. Carolina’s Sebastian Aho and Minnesota’s Mikael Granlund were your first and second stars. Budaj’s 25 wins are tied for sixth in the league, his 2.02 goals-against average ranks fourth, his seven shutouts lead the league, and interestingly, his 2,613 minutes rank third. “Obiously it’s a lot of game. I’m excited that I get a chance to play that many games. Everybody wants to play and I’m very thankful for that,” Budaj said. “Obviously you’ve got to take care of your body, you’ve got to be smart. Eating right, sleeping right, you know, doing the right things whenever you get a chance to recover, you recover, you take the time. You’ve just got to stay on top of it because health is the most irreplaceable thing for the athlete, so definitely I try to stay on top of it. Thank God I’m feeling good and strong and the coaching staff has been great. Our strength guy, Matty Price, he’s doing a great job. He’s giving it to you hard when we need to and when he doesn’t need to go hard, he gives you a little bit of more recovery time, and they’re doing a great job, so everything goes together and thank God I feel good and hopefully I’ll stay well.”

Is his approach towards the minutes he plays any different now than it was when he was in his mid-20’s? “Your body’s way different,” Budaj answered. “When you’re 25 I think your body’s more durable I think. You’re still young and you’re still just, you know, and also you’re learning the game. You don’t know your body as well. You don’t have as many experiences with your body as a 34-year-old. I think it compensates for the youth. I would say I don’t think I’m old, I think when you’re 20 or 21 you don’t know much about your body. When you’re 30, 34 you know more. You understand your body, you understand what you should eat, when you should eat, when you should sleep, how much you should sleep, so I think it compensates for the lack of knowledge as 25. A little bit younger body than 34, you know, knowing your body well and be able to prepare as best you can.”

-Jordan Nolan, who was placed on injured reserve yesterday, is out with a muscle pull. Though he’s “day-to-day,” per Darryl Sutter, he has a minimum seven-day injured reserve stay and won’t fly across the country to join the team on this trip.

-I spoke with Bob Miller while the team was getting ready to get onto the ice, and he was in very good spirits. He’s been watching the games on this trip and was able to spend some good time at home last night watching the Super Bowl with his wife, Judy. He has additional appointments coming up, but there’s not much to share beyond that; for more on Bob, Tom Hoffarth of the Daily News had an update on Friday.

-In recognition of LGBTQ support and awareness, and to fight homophobia in sports, the Kings are hosting Pride Night on February 16 against Arizona. Tickets purchased through this link will include a commemorative Pride Night T-shirt, and a portion of the proceeds will benefit the You Can Play Project. This month, each NHL team has chosen one player as a You Can Play ambassador; for the Kings, that player is Dustin Brown. “It’s just bringing awareness to it,” Brown said of his role as the club’s ambassador. “I have friends that are needing support and it’s just something that’s becoming more and more important in society.” After today’s Darryl Sutter quotes, I’ll have a story up on Brown’s role in this platform. The league also recognizes February as Hockey is for Everyone Month in an effort to promote and facilitate diversity throughout the sport. For more on each team’s You Can Play ambassadors, click here.

The NHL's Third Star of the week leaves the ice after practice in Tampa on February 6.