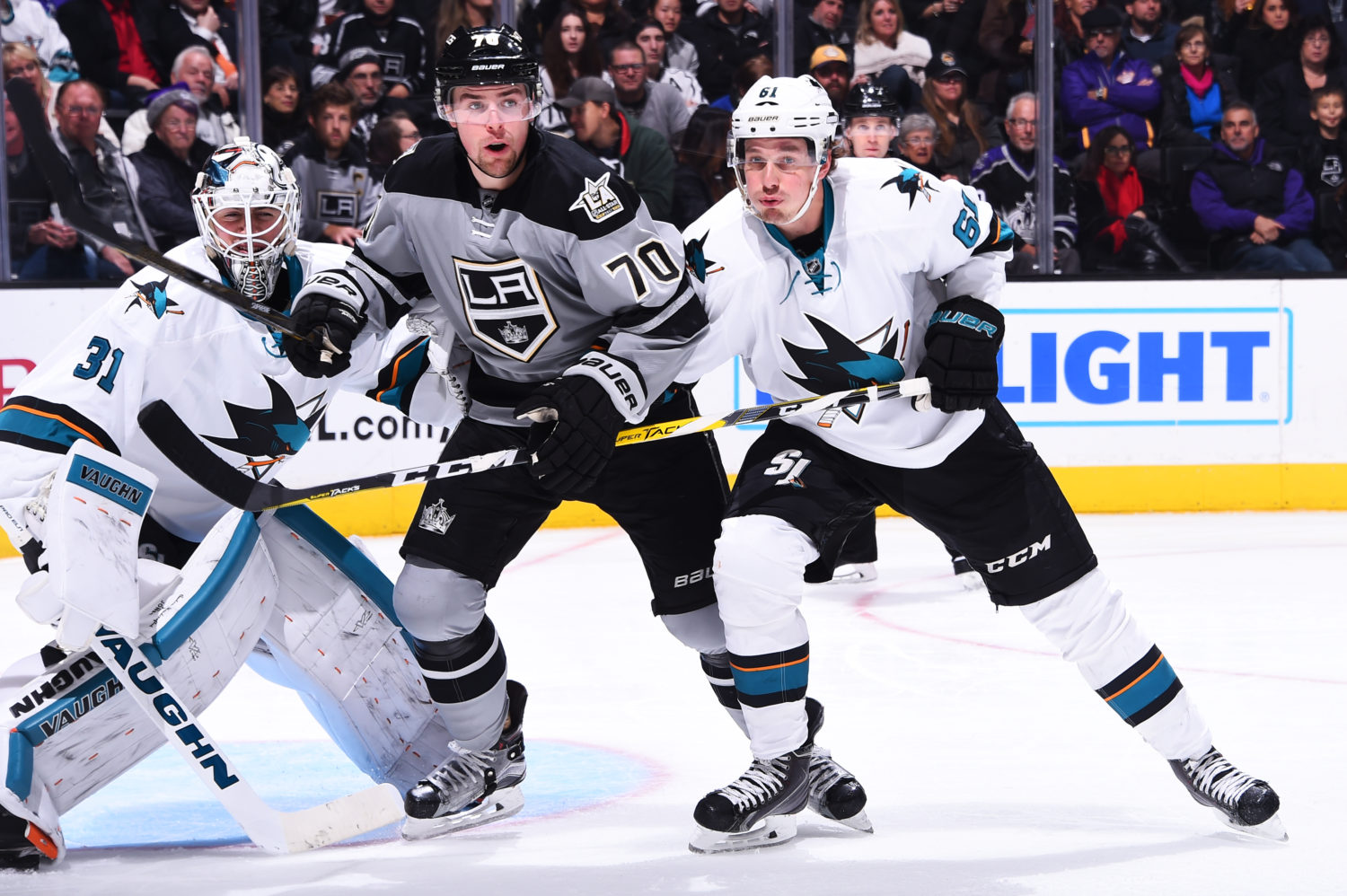 Tanner Pearson, on the importance of getting a win against San Jose:
I don’t think it was just because of that team. I think we needed a big two points, and you know, a division game and four points were on the line so it was a big game overall not just because it’s against the San Jose Sharks it’s, we need the win right now and we need to put this one past us and move on to the next one.

Pearson, on whether they needed a win after the long road trip:
Yeah I think, you know, the key thing is getting the first one and not chasing the lead right off the start obviously helps. It is nice to be home and you know, teams have to come in here and they know that they’re coming in here. I think everyone in the league takes pride of their home ice and we’ve got to be there, too.

Pearson, on what the Kings improved on against the Sharks:
If you look at the last game I think the defense and the goalie played well, the forwards weren’t able to finish. We finished our shots tonight and we came out on top so I think if you put everything together starting in our own end and go from there it helps out.

Pearson, on his line playing most of the game in the offensive zone:
Yeah, I think we were playing pretty good. Last game wasn’t a really good game but we talked it out. I think the key thing for us is when we’re communicating on the ice and letting each other know where to put the puck always helps and that was the case, you know, Carts yelling at me when he’s going up the gut there. You give it to him there and it’s, you know, you saw what happened, so it’s one of those things where communication goes a long way.

Pearson, on the Kings going 6-0 in the 50th anniversary jerseys:
Knock on wood. Way to go, Jon. Jeez.

Peter Budaj, on whether this game was an “emotional win”:
Oh definitely, I think we have a good little rivalry going on with San Jose obviously. They have a very good team and we always play them hard and they always play us hard so it’s a big win especially after the two losses we had. It’s a big swing for us.

Budaj, on what made the Kings’ so dominant in the first two periods:
You know, that’s just, we said no panic. You lose a couple but we’re back home after the long road trip and you want to be a homer. I think in this league you want to obviously play well on the road, too, but you want to win as many games as possible at home. It’s your home so we tried to get on them, you know, they played last night so we just tried to get a step there and that’s what we did and it was a very good start and the guys played great in front of me. I think we didn’t give up much but they’re a very dangerous team, they don’t need much to make it interesting and they did so it’s a big game for us and a big two points.

Budaj, on whether the second period was a “good template for the way the Kings want to play”:
Definitely, we want to play this way all the time. It’s a grind, it’s a battle, it was a a physical game but we just have to play just like we did today. Do the little things right, block the shots, make a good pass, and good backcheck. Backcheck was really big today because they have a really good transition team, especially their first line is very strong and we did a very good job against them.

Budaj, on having the most wins in a single season in over eight years:
Yeah it feels pretty good. It feels pretty great I would say, not good. I’m very thankful to be healthy and to be here and to help the team to win games and play as much as I’m playing. I’m very thankful to God for that, it’s just a great experience for me. I’m excited to see what 2017 holds for me and just got to stay humble and try to work hard and take one day at a time but definitely this is a pretty amazing experience for me.