Under the No. 9 jersey worn by Adrian Kempe the 20-year-old sports a full sleeve on his right arm. The skulls and roses that cover his arm were more just something he liked, but there’s also clock he got on his brother’s birthday.

While the artwork is something he found aesthetically pleasing, the artist is someone special to him and his family in his native country.

“My godfather actually did it,” Kempe said. “He’s a tattooer back in Sweden. I started it two, three summers ago. My brother has tattoos and everything so I just wanted it too. I think it was cool, and I liked it.” His godfather Andres is one of Kempe’s father’s best friends: “We grew up in the same town, because of that he’s always been taking care of me.” 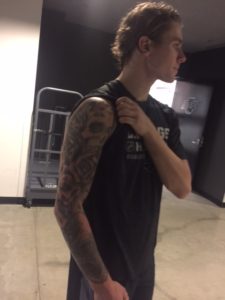 If you’re not on Instagram yet you might want to be so you don’t miss the next edition of #MeetTheReign from Paul Bissonnette (aka @biznasty). The well-liked veteran chooses old hockey photos of his teammates and puts together a fictitious storyline of jabs.

“I started doing it in Manchester and it was just being bored on the bus,” Bissonnette said. “Sometimes you look at guys’ mugshots from their hockey days and they’ve got funny ones. It’s hard. Sometimes you want to do guys but they don’t really have great pictures and then you don’t really have any dirt on them.”

Each post is a hit within the team and hockey circles of social media. This past weekend’s victim was rookie Damir Sharipzianov.

“The last one on Linti was OK just because of the snack thing, but some guys you’ve just got nothing on,” said Bissonnette. “So I’ve got to start getting creative here, maybe do one about Amadio. You’ve just got to find the perfect picture that suits the thing. Last year Mersch’s head was so big on the picture and he has a huge head.”

The Reign won back-to-back games over the weekend against Iowa (6-5 SO) and Rockford (3-1). … The long wait was over for Rob Scuderi as the veteran defenseman made his Reign debut on Saturday. Sharipzianov made his season debut the following day. … Paul LaDue really, really scored his first AHL goal in Saturday’s win over Iowa on a one-timer from the left point. This goal will stick. In last week’s Reign Rewind we took a look at Jonny Brodzinski’s tip of a LaDue shot that was originally credited to the defenseman. That goal was changed mid-week by the AHL and awarded to Brodzinski. … Mike Amadio is gaining a bit of confidence and had points in all three games last week. In particular, the rookie made a great read on the forecheck against Iowa to intercept a breakout pass and set up a goal by Kempe.