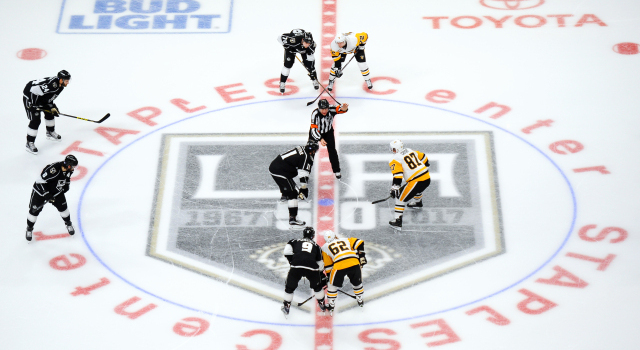 On what the Kings did well in the win:
We obviously played through coming from down a goal and got a lead. I thought we were really solid. That’s what I said this morning. Score the first goal. Just got to keep fighting through that stuff.

On whether Trevor Lewis’ goal gave the Kings a shot of confidence:
We just kept talking about composure and trying to make the right play, and we were doing that for the most part. [Reporter: Took it to the net, and just made it happen?] On Lewie’s goal? [Reporter: Yeah.] Yeah, I think everybody was open there – Lewie, Cliffy and Shoresy. Everybody was open.

On Teddy Purcell’s return to the lineup:
I think he made a lot of good plays. I’m sure the pace of the game got him a little bit. Hadn’t played for a long time. He’s got some composure with the puck.

On Kevin Gravel’s season debut:
I thought he was solid. He can skate and reads the play well and he’s got some quickness to our game. It’s something we need in our back end.

On what type of player Nic Dowd projects as:
Well, on our team, we’re trying to get him to be a solid, third line centerman, and we know who the first two are.