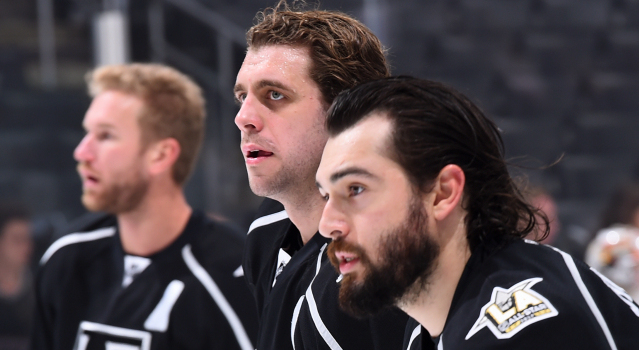 Anze Kopitar, on whether the team’s challenges go beyond offensive struggles:
Yeah, definitely more than just offense. You can’t expect to win games when you give up four. We’re taking too many penalties. We’re not creating enough, not drawing any penalties, for that matter, so we’ve got to, like I said, put in a lot more emotion and desperation in our game.

Kopitar, on how the team can emerge from its challenges:
I think it’s just preparation. Each and every one, and it’s on us leaders, me on top of that list, to lead the charge and tonight obviously was not good at all on my side, I’ve got to be a lot better.

Kopitar, on how to end the early season skid:
Well, early in the season the points are just as important as they are late in the season. If we’re going to use that as an excuse, it’s not a very good mentality to have. We’re not looking at it that way. We’re a below-.500 team, and we’ve got to get above that.

Matt Greene, on how the game got away:
Again, it’s been the key all year. We’ve just got to be better. We’ve got to be better than we have been in the second period here. That’s the PK right there. You get those two goals back-to-back, those are game-changers. You can’t let that happen, and now we’ve got to figure it out. There’s a lot of parts in our game that’s got to get a lot better.

Greene, on whether the losing and difficulty scoring has compounded:
No, there’s a lot of things. I mean, you’ve got to get yourself going, too. I think everybody can get a little bit better. Some guys can get a lot better, myself included, and we’ve got to [——-] turn this thing around.

Greene, on what’s missing from the team’s game:
Scoring, obviously. But that’s a part of everything. That’s the D breaking the puck out smoother, that’s transition being better, that’s everything. I mean, there are a lot of holes in the game the last couple games there, and we’ve got to shore it up and get things right and get going and right the ship.

Jack Campbell, on entering the game in the third period during less than ideal circumstances:
Buds has been playing good, so it’s been great for me to sit there and have a great view of the speed of the game and watching why Buds has been so successful, so I just tried to go in and do everything we’ve been working on. It felt good to get in there. It’s been a while for me since my last game, and the team played great in front of me, so that was a good sign.

Campbell, on learning he was entering the game and playing his first game since October, 2013:
I was pretty excited. I’ve come a long way in my mentality over the summer and right now. Normally I’d be pretty nervous and stuff, but I was fired up and feeling really good about my game, and obviously it helps to have a great team in front of you. We just didn’t get the bounces in the offensive zone, but I know we’ll score. We have a lot of great players, so that shouldn’t be an issue.