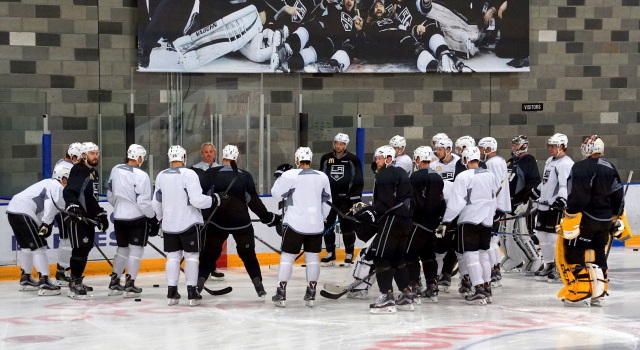 Good afternoon from El Segundo, Insiders. Quite a busy morning around these parts. The lines at today’s morning skate:

-So you may have noticed that Jeff Carter is not included, and instead, Teddy Purcell, who is not a center, is listed with an asterisk in his spot. This, as you may have guessed (or had read on Twitter) is because Carter occasionally takes the option for morning skates. Purcell does not appear to be quite ready to return and was instead standing in for the center. Expect Carter to play. Andy Andreoff was not among those who took the ice shortly before 10:00 a.m.

–No surprises: Peter Budaj left the ice first at the morning skate and is expected to start in net against Anaheim (7:30 p.m. / FOX Sports West / FOX Sports Go / KABC 790 / I Heart Radio).

-Lo, who is that yellow-padded goalie? Why, that would be Anders Lindback. As noted yesterday, the Kings were planning on bringing him in this week to take a look and see where he was at. His visa situation is all but sorted out, but while he’s on an AHL PTO he can only practice with the big club, not play in NHL games. (All photo credits, including the banner image and those below, are courtesy of Jon Bradley.)

-Jeff Zatkoff faced a few shots prior to the morning skate but isn’t on the verge of a return. The next step in his recovery will be to see some shots that aren’t quite as simulated. “You know, a little more reactionary and just make sure I can have that and kind of go from there. That’s kind of the next big step for me is not that pre-planned shot but just kind of going into a little something, just going with the flow and reacting and seeing how I handle it,” he said. Expect a Zatkoff update and an Alec Martinez-Drew Doughty pairing story later this afternoon after some Darryl Sutter quotes.

-Staying on the goaltending theme, John Gibson is expected to draw the start for the Ducks. Skilled forward Rickard Rakell is expected to make his season debut, but top defenseman Hampus Lindholm won’t as his own visa situation is sorted out, according to Eric Stephens of the Orange County Register. “I still think we have quite a bit of work to do,” defenseman Cam Fowler told Stephens of Anaheim’s 3-4-2 start. “There’s little bits and pieces of our game that can certainly improve. … It’s early in the year so we have lots of time. I know what this can do and I don’t think we’ve even scratched the surface yet.”

Btw the Ducks and Kings are on a combined 220-minutes plus scoreless streak.