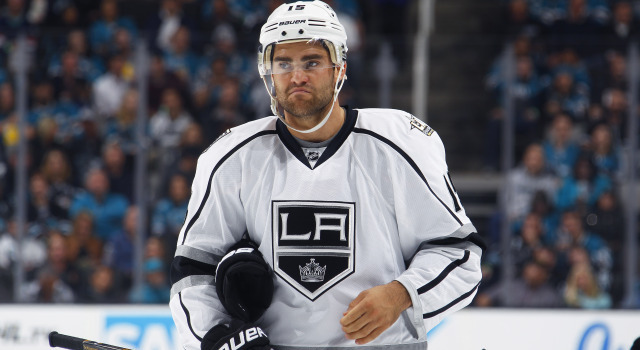 Another game, another Kings injury.

Andy Andreoff did not return to the game after leaving the ice when the puck was deflected into the netting behind Peter Budaj 2:24 into the second period, and during the second intermission a team spokesperson said that he had suffered an upper-body injury and would not return.

There was no video of Andreoff’s injury, and the play by play log did not offer any hints towards the nature of the ailment. In 3:56 of ice time, Andreoff was not credited with any blocked shots, nor was he the recipient of any recorded hits.

As has become custom, there was no specificity on the nature or location of the upper-body injury after the game.

“Left with an injury,” Darryl Sutter said. “You guys saw that. I mean, you saw the same thing I did.”

Between the World Cup of Hockey and the first nine games of the season, the Kings have lost Marian Gaborik, Jonathan Quick, Teddy Purcell (who was at 90% on Friday, according to Sutter), Jeff Zatkoff, Brayden McNabb, and Andreoff to injuries. As of game time, no roster moves were immediate, but given the rash of casualties, it should be expected that moves will be made in advance of Tuesday’s game against Anaheim.

Final cuts at training camp were defensemen Kevin Gravel, Rob Scuderi, Paul LaDue and Kurtis MacDermid, and forwards Adrian Kempe, Michael Latta and Michael Mersch, so any roster moves are likely to come from that group. Kevin Gravel was probably the closest defenseman to earning a regular role in training camp, so he’d be a strong candidate to take the roster spot vacated when McNabb was placed on injured reserve before the game. McNabb suffered an upper-body injury in the 1-0 loss to St. Louis on Saturday. The defenseman underwent X-rays at the Scottrade Center and had his arm in a sling, per Sutter.

In nine games this season, the 25-year-old Andreoff has been held without a point. He has a minus-one rating, eight penalty minutes and four shots on goal.

After hosting Anaheim on Tuesday, Los Angeles will welcome Pittsburgh to Staples Center on Thursday and Calgary on Saturday.