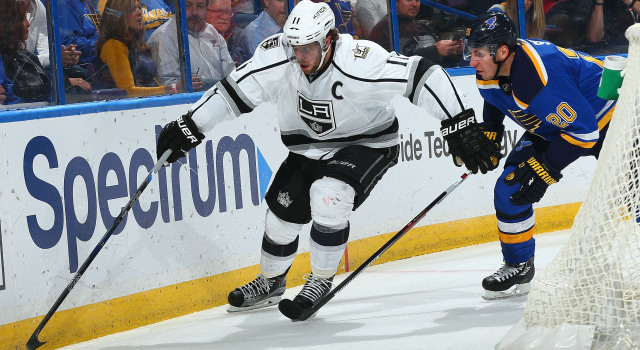 Though he now wears the “C,” Anze Kopitar, the Los Angeles’ Kings premier offensive player, has long been a part of the team’s leadership committee.

It wasn’t expected that Kopitar would change much of his approach, if any, with a different letter sewn above the team’s insignia. Championing more of a cool, collected approach than a disposition prone towards fiery outbursts, he’s someone who serves as a calming, alluring presence within the team’s room, and that won’t change. It has served the team well.

Kopitar, alternate captains Jeff Carter and Drew Doughty, and a Kings team that entered the year with questions about its depth, wasn’t exactly dealt pocket aces to begin the season. Marian Gaborik was injured at the World Cup of Hockey; he hasn’t resumed skating. One period into the season, Jonathan Quick suffered a significant groin injury that will sideline him for a ballpark of three to four months. On Saturday, defenseman Brayden McNabb, who had shown early season signs of stepping towards the potential that many have expected of him, suffered an upper-body injury when colliding with 6-foot-6 Blues defenseman Colton Parayko and falling awkwardly in the left corner of the attacking zone. An update on McNabb’s injury is expected to come later today.

Given the circumstances, do more eyes turn towards Kopitar than prior to his appointment as captain? The 29-year-old’s didn’t think so, though the more he thought about it, the more nuance there was in his interpretation of a challenging situation for the team.

“I guess, maybe,” said Kopitar. “For me, a big thing is just get ready and make sure that one [loss] doesn’t turn into two or three. We have to go in there and play. We all know that they’re a good team and we have to be ready off the get-go. I most certainly want to lead that charge, and that’s about it.”

It’s clear that attention has quickly shifted to the Chicago Blackhawks on the second night of a back-to-back set. It’s interesting – the team is so well insulated by Darryl Sutter that the big picture is rarely painted by the coaching staff or the veteran team leaders. Immediacy is paramount, and there are blinders on anything beyond the 6:00 p.m. CT tilt (FOX Sports West / FOX Sports Go / KABC 790 / I Heart Radio).

“You can definitely put it aside,” Kopitar said. “We definitely pride ourselves on everyone being really good leaders and finding your identity and role on the team so in times like this I think, yeah, your top players have to be your top players, but at the same time, everybody’s gotta be pulling rope in the same direction. That’s what we’ve always done, and I’m confident we can do it again.”

Anze Kopitar, on Saturday’s 1-0 loss in St. Louis:
I think we created quite a bit of chances. That’s certainly a positive. There’s some stuff that we obviously have to clean up, we gave up quite a few [chances]. Peter [Budaj] was standing tall back there, so that’s certainly a positive. Once we come down, and once we have the opportunities they don’t come by very often so when they do you have to make sure you do everything you can to put it in the net.

Koptitar, on Chicago’s penalty killing struggles:
We’ve got to do it. There’s no secret to it, our power play has to be better. Again, a lot of it falls on us, but it’s just making sure that we make plays that are there and we take shots that are there. It doesn’t matter if they’re struggling on the PK or what not, we still have to go out there and execute and make things happen.