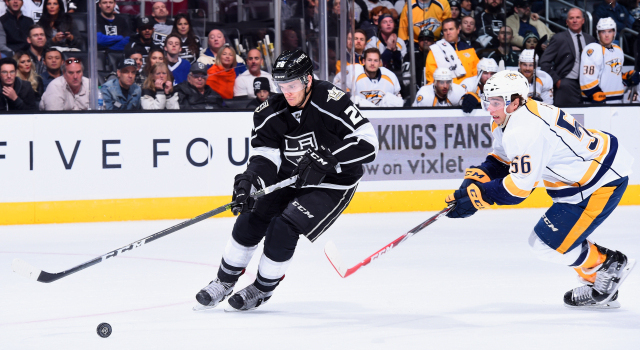 Jeff Carter, on his game-winning goal:
I’m just glad it went in. It’s been a little bit of a battle lately, but nice play by Kopi and Drew right off the play, and Kopi got loose up top there. It just kind of bounced around in some skates and popped out to me. I didn’t even shoot it at the net. It just kind of took off on me, and I got a lucky bounce, but we’ll take it.

Carter, on how the team was able to generate a third period surge:
I think we had maybe a little bit of a sluggish start. It took us a little while to get going. We just stuck with it. Teams like these, they’re not easy games. You’ve got to battle right to the end, like we saw. It’s just three or four overtime games in a row now. Every night’s a battle. There are no easy games anymore, and you’ve just kind of got to stick with it.

Carter, on the team’s degree of success in three-on-three overtime:
Big saves and scoring on your opportunities. That’s really all it is. Kopi did a great job in the overtime of winning draws, and that’s a huge part. You start with possession, you’ve got a good chance. He won draws, drew a penalty, probably should’ve put one in on the four on three – we had a lot of good looks. But really what it comes down to is getting a save from your goalie and burying your opportunities. There’s not much to it.

Nic Dowd, on his situational play:
Just late in games, you’re taking faceoffs. I did that a lot in the American League. Power plays, stuff like that, I was fortunate enough – Stuttsy gave me a lot of responsibility down there – but it’s different against guys up here. You’re playing with the elite players of the world, and you’re definitely a lot more challenged.

Dowd, on his confidence:
I just think that everyone’s playing well right now. I think our goalie’s playing really well, I think our defensemen are playing well, and that helps a young guy like me. It helps guys get up the ice and play in the offensive zone where you want to play.

Dowd, on the second power play unit’s success:
We had a little bit of a different look tonight. I think we had Muzz on there and Toff on there, but once again, nothing special. Our goal, very similar to Pearson’s goal. Tonight was just pass-pass-shot, and Muzz did a really good job of getting it through a couple layers and Brownie was screening in front. Simple, get pucks to the net. The five-on-five goal was the same way. End of the power play, but just got pucks to the net. It took kind of a weird bounce, and Toff stopped it in front and made a good play.

Dowd, on four consecutive overtime/shootout wins:
Well, it’s long. I don’t think we’re trying to do that, but I think we did a good job of fighting back. Once again, Buds gave us another opportunity to win. I thought we did a good job of getting shots to the net. I mean, we had 40, I think. Limiting their opportunities, we won the special teams battle. I think overall, just continuing to battle.

Dowd, on why the team has found success in third periods:
Urgency, maybe. I don’t know, this is my 10th game, maybe, so I can’t really speak to that. I mean, there are a lot of guys in here that have played a lot of games. It’d probably be a better question for them, but just from being a hockey player, I think guys are more urgent in the third. The last, what is, it, you win the third period, you win the game.