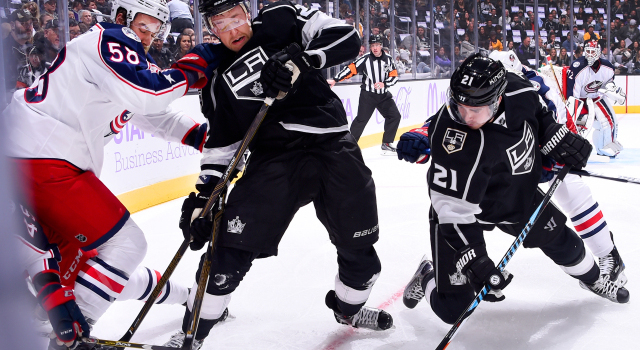 Alec Martinez, on whether the team’s overtime success derives from puck management:
I think so. You find that possession is obviously huge, and off of that are draws. I think Kopi’s line won both draws on that three-on-three, and that makes a huge difference because with us switching sides and switching ends, you create difficult changes, so that can keep guys on the ice. I think you usually need a good, strong defensive play, because you try the quick strike off those because often times that catches a guy. I mean, when you’re playing three-on-three, you make one pass, and often times it’s a two-on-one, so I think it’s a lot of different things, and I know for whatever reason we’ve had success.

Martinez, on the game-winner:
Like I said, I feel like a broken record, but Ty and Pears just do the work and then I pick up the scraps, apparently. I don’t know who it was – it was in the D-zone, and then I think someone did a good job staying on their guy. It might’ve been Toff. It hit the back of his skate, so I just tried to pick it up, and I just tried to get it in their hands as quickly as possible, and then Pears had a good shot. I don’t know if it hit armpit … and it was just laying there. I was able to put it in, but again, those guys did the work, I just picked up the scraps.

Martinez, on whether the puck comes off Tanner Pearson’s stick quickly:
Oh, yeah. I mean, it’s no secret that Tanner Pearson has one of the best shots in the league.

Martinez, on whether the team’s game is stabilizing:
I think we’re finally playing our game. I think we’re finally playing in a rhythm. I think the first few games, every game I’d say that we got better in certain areas. We were just out of sync, and I think that we’re finally playing more of a north-south game. It’s no secret – our game as D-men, break the puck out and get it in the forwards’ hands and get in on the forecheck and wear teams down on the cycle, so I think we’re just finally starting to find a rhythm, and I think that we’ve just got to do a little bit of a better job – Darryl mentioned it, and the guys noticed, anyway – but our second periods have to pick up. We’ve had some mental breakdowns, and that’s led to goals against. We can’t do that, especially against a team like Columbus who’ll capitalize on those chances. I think there’s obviously plenty of room for improvement, but I’ll take it.

Martinez, on whether there was similarity between the teams defensively:
I wouldn’t really agree with that. I think two strong defensive teams, but I think the second period at some point, for a while there, it seemed like it turned into a track meet. It was just back-and-forth, but I think they’ve got a really good hockey club over there. I think we do too, so it’s obviously going to set up for a good battle.

Nick Shore, on his game-tying assist in the third period:
I was just trying to buy a little time, and then Dewey came yelling probably from off the bench, and I was able to move it over to him, and he just made a play. He does that a lot. [Reporter: Is he often yelling for the puck? I can imagine that he is.] Oh, certainly. He’s a guy that wants it all the time, and you can usually hear him out there.

Shore, on whether the team gains confidence from a late goal in a tight game:
I think no-matter what situation we’re in as a team, I think we’re always going to be a confident group. You know whether we’re up or down, we’re going to stick to the plan. Obviously battling back was big for us tonight, and we were able to get the two points.

Shore, on Peter Budaj:
Buds has been awesome. You can’t say enough about him. He kind of got thrust into the spot there, and he’s done excellent since he’s been there.