Jonah Imoo to be backed up by father Dusty 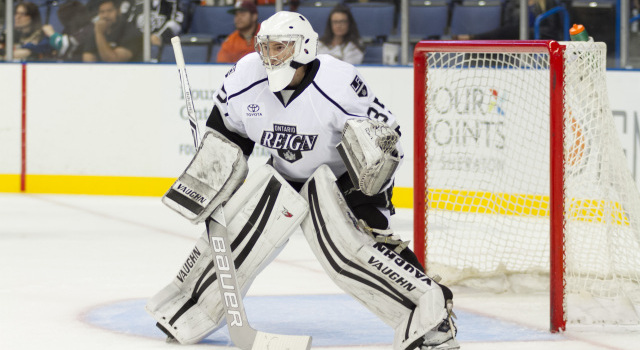 A little bit of hockey history will be happening tonight in Ontario.

As goalie Jonah Imoo is making his first pro start it will be his father Dusty, the Reign’s goalie coach, who will serve as his backup.

“This could set some kind of hockey history,” Reign coach Mike Stothers said following morning skate ahead of tonight’s 6 p.m. game against visiting San Jose. “The son will be backed up by his dad. We’ll have two Imoos on the roster, both on PTOs. … I guess it’s good to have your goalie coach that close, right? He’s on the bench.”

The reason the Reign are in this predicament is their starting goalie Jack Campbell will be going to Los Angeles to serve as the Kings’ backup after a morning skate injury sustained by Jeff Zatkoff prior to their game against Vancouver. The Reign’s expected No. 1 going into the season before Campbell was Peter Budaj, and he’s with the Kings due to an injury to Jonathan Quick. Just last weekend the Reign had to bring on Jonah Imoo to back up in San Diego after Budaj was recalled. And so the cycle goes and here we are in the rarest of circumstances.

“It is amazing a goalie situation has come up again this early in the season,” Stothers said. “Jonah is going to get his first American Hockey League start. He’s worked hard for the opportunity. It certainly hasn’t come easy to him. It’s not because his dad’s the goalie coach of our team. He’s legitimately put in the time and deserves an opportunity. He’ll go in. It’s a little bit unexpected. We weren’t counting on this happening but maybe it’s better for him. He doesn’t have that much time to think about it. Just go in and play. We’ll see how it goes.”

As most goalies aren’t, Jonah Imoo was not available after morning skate to provide comments.

Jonah Imoo, 22, was with the Reign through development camp and training camp and played in just three games last season split between the Southern Professional Hockey League and the Federal Hockey League. Most of his experience comes from time spent in the British Columbia Hockey League, where he played consistently from 2012-15. His father of course has a bit more of a decorated resume, including playing for Japan in the 1998 Winter Olympics. Dusty Imoo, 46, has been a goalie coach in some capacity since 2008 and is in his second season with the Kings organization. He’ll occasionally put the pads on if the Reign need him to in practice.

“Jonah’s by far the better of the two,” Stothers said with a laugh. “But you know what, it’s unique and it just proves to you what life is like, what we deal with every day in the American Hockey League. You never know, right? I just hope it works out well for both of them and obviously for us as a team. Probably the most nervous person is going to be the mom back in Vancouver area. Unless she’s hopping on a plane to get here in time to witness this hockey history.”