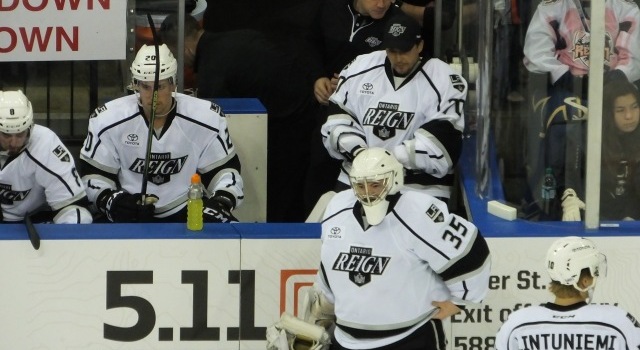 You couldn’t make it up.

A storyline for a Disney feel-good movie was unfolding live in Ontario on Saturday.

The view wouldn’t be terrible for Dusty: a spot on the bench reserved for him as hours before game time the most unpredictable of circumstances began to unfold.

Saturday was a typical day. Pushing 90 degrees in Ontario by 10 a.m. for morning skate as the team prepped for a 6 p.m. game against visiting San Jose. Typical until the news took wind that Kings goalie Jeff Zatkoff suffered an injury and the Reign would need to send starter Jack Campbell to Los Angeles.

So Jonah Imoo, Campbell’s back-up would be in.

“I showed up to the rink not expecting to play because I didn’t know about Zatkoff’s injury,” the 22-year-old Jonah Imoo said. “I was getting dressed about to go on the ice. … Campbell got pulled off to the side and [head coach Mike Stothers] came back in and said, ‘You’re getting your first start tonight, kid.’”

But the person who would back-up Jonah became the twist in the story. In the direst of goaltending circumstances the organization would need Dusty to play behind his own son.

“I had a lot of time to think about it,” said Dusty, who drove in from Los Angeles in the afternoon. “By the time I got here I was OK and I talked to Jonah and got him on track and told him that it’d be business as usual. I knew there’d be a lot of attention drawn to it. It’s enough pressure for a kid like going into this situation, never mind to have your dad backing him up. I tried to defuse it early but inside I bet I was more nervous than he was. He looked like he was ready to go.”

Jonah tried to keep things business as usual on game day — he only told his mom Rhonda and his best friend about the start. No big deal, right?

“I really didn’t think how crazy the situation was with my dad. It just blew up and my phone has not stopped vibrating since,” he said.

But as first impressions go on the ice it was an admirable debut under the spotlight.

Jonah stopped 26 of 31 shots despite the Reign taking a 5-4 overtime loss to the Barracuda. He was beat on a breakaway by Daniel O’Reagan 3:29 into the extra frame.

But the entire way from start – name plates side-by-side in the locker room — to finish, his father watched from the bench in full gear.

“It was a little more relaxing because he’s my dad, he knows exactly what to say to me in every situation,” Jonah said. “He’s been my goalie coach and my mentor my whole life. Every time there was a timeout I knew he was going to have some reassuring things to say to me.”

Dusty’s been with Ontario since the team arrived last season and a goalie coach in some capacity since 2008. He played for Japan in the 1998 Olympics and in the Japan Ice Hockey League as well as the Western Hockey League in his playing days.

A jersey was made for him last season just in case this emergency situation arose. Even though he didn’t play one minute, he was plenty active from the bench as any nervous father would be.

“They put the stool there but I left the stool quite early,” he said of his point from the bench. “Plus they were having me do the gate so I was actually getting into the game, it was kind of cool.”

For Jonah it was his first regular season game since last Christmas, he recalled. Last year was a rough one. He suffered a broken finger and needed surgery and played in just three games.

Saturday was more than just a storyline.

During most games Dusty watches from above and between periods he picks and chooses his battles as to when he wants to intervene with the goaltenders he oversees. As he explained that process after the game he had to stop himself.

“I always play it by feel. If I’m up top and I feel that someone needs some guidance to get back on tracks kind of thing, I’ll come down. But I don’t like to be in their hair all the time. If they’re rolling they don’t need me, I’m not their da-,” he caught himself, laughing. “That was by accident, actually.

“I’m usually not their dad.”