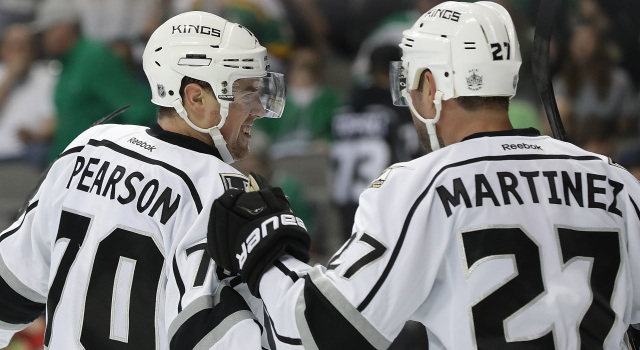 Alec Martinez, on whether there was “relief” with the win:
It obviously wasn’t the start we wanted, but I think this was a hard-fought game, it was really emotional, and there was a little bit of everything in terms of situations. I think that we can take the positive. I think this was probably the best 60-plus … [-minute] game that we’ve played all year, and I think the emotion was a big part that maybe was missing the first couple, and it was there tonight. Obviously it got a little chippy. There were a couple scraps, a couple fights. Nabber had a good fight. I think that’s what we’ve got to take and bring it back home to Vancouver on Saturday.

Martinez, on the team’s checking:
I think we were quick to close. They got a really fast team. They’ve got a lot of guys that can skate, a lot of guys that can make plays, firepower. I mean, there’s no secret – correct me if I’m wrong – but I believe they were the highest scoring team in the league last year. You’ve got to be able to check against those guys and take away their time and space and limit their opportunities.

On not having qualms with Peter Budaj in net:
No, he was awesome. That’s why you have depth in an organization, and we’ve been fortunate enough to not lose Quickie very much throughout his career. Things like that are going to happen, and you’re going to have to tap in to that depth pool throughout the year, and unfortunately we had to do that one period into the season. But we have the utmost confidence in Buds and Zats. Buds has clearly had plenty, plenty NHL experience, and Zatkoff does as well. We have all the confidence in the world in those two.

Tom Gilbert, on setting up Nic Dowd’s goal:
Honestly, it was all effort down below the goal line to start the whole play. That’s where everything started, and it just opened up the whole middle of the ice. I got the puck and Nic was wide open.

Gilbert, on whether Antoine Roussel frustrated the team at all:
No. We know he plays, and we just ignore it.