Big season expected from Pearson, whose focus is more acute 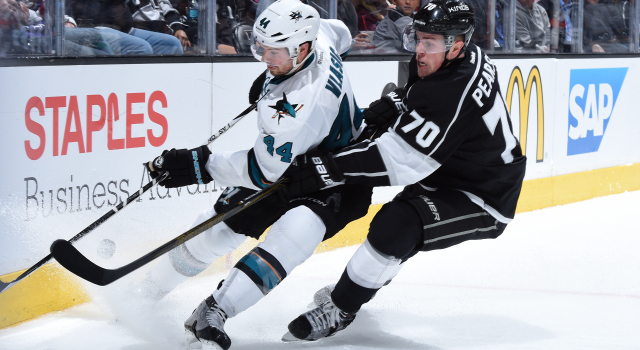 Tanner Pearson isn’t Rocket Richard, but he did score 15 goals last season, 13 of which came during even strength play. On a Kings team in search of offense, his reappearance in the lineup is a welcome and needed addition.

“It’s definitely a good feeling,” said Pearson, who was suspended for two preseason games and two regular season games for a check to the head of Edmonton’s Brandon Davidson that resulted in an injury. Pearson, who had no prior incidents with the Department of Player Safety, was also assessed a game misconduct during the October 2 game.

“I think it wasn’t an ideal way to start the season, but it happened, and now I’ve got to focus on playing my game and helping this team get the first win under the belt.”

Though the 24-year-old had seen a good amount of time opposite Tyler Toffoli on Jeff Carter’s line during the preseason, “That 70’s Line” hadn’t been consistently productive since the first month of the 2014-15 season. At yesterday’s practice and today’s morning skate, he was aligned to the left of Carter and Devin Setoguchi.

“There’s a reason why [Setoguchi has] scored [127] goals in this league,” Pearson said. “Good shot, good speed. You know, hopefully I’ll play with two shooters today, so get them the puck and let them do their thing. … It’d be nice to build some chemistry right off the get-go and get the ball rolling.”

Darryl Sutter reiterated what he had said yesterday, that Pearson will provide another scoring element from the left wing, a position the Kings didn’t wring much production from during the preseason due to Marian Gaborik’s injury. Sutter also noted that Pearson’s arrival helps the club in a variety of different situations. He has good, active legs and a poise that allows him to operate at a high speed and is among the most effective forecheckers on the club, which should allow the team to turn more pucks over and play to its strengths in the offensive zone.

“He can check and he can kill penalties,” Sutter said. “He can play on the power play, he can play against top guys. He’s a good competitor, it’s just getting a little more experience. He’s a 15-goal scorer last year that we hope can get to another level there.”

Any bigger picture, such as the pressure and expectation for Pearson to raise his production with 146 regular season games and a Stanley Cup under his belt, wasn’t the focus on the morning of the winger’s debut.

“I think the first game – as everyone’s had a couple under their belt already – you kind of just want to focus on the little things first and I think with every game being the same thing,” he said. “Focusing on those things and that will help the bigger picture.”

Tanner Pearson, on the challenges of sitting out games to start the season:
It’s always [challenging], I mean, I sat out long enough the one year. Watching any game is no fun obviously, you want to be out there helping the guys, helping the guys win and that sort of thing. But you know, the past is the past and you know what you’ve got to go shift by shift and hopefully get the win.

Pearson, on the importance of starting quickly against Minnesota:
Yeah, I think any time you’re on the road you want to have a good start. Obviously the building will be on their side. You know, slow the fans down then slow the momentum of them coming out. Just have a good ten minutes and then go from there.