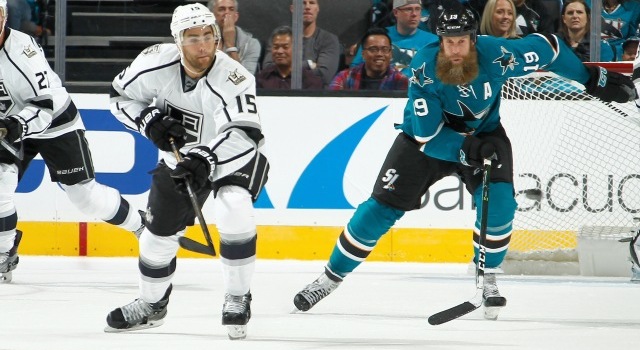 As a third-year player under Darryl Sutter, Andy Andreoff is among the players who will be asked to continue to reach the next level in his performance as an NHL player. To provide the base for this season, he etched out a strong training camp and will look to transfer his raised scoring output from the end of the 2015-16 season into his current campaign. Before the team packed up for Minnesota, he spoke with LA Kings Insider about his line’s early performance, switching between center and wing and what he’ll look to accomplish in the coming year.

Andy Andreoff, on the three-day break between games near the start of the season:
It’s always nice to have a couple days off, you know? You kind of take advantage and recover the body and just get ready for the next game. We’ve got a few days on the road, so just prepare for that.

Andreoff, on the structure of early-season practices:
I think we’ve just got to get in shape here. We’ve just got to practice game-wise, so just being ready for the game.

Andreoff, on his line’s performance through the first two games:
Obviously I think we’ve just got to build on the positive shifts. We got a little sloppy in the D-zone, so I think just preparing for that and getting ready for the mistakes we made and just learning off those mistakes and making sure we’re better in the D-zone. Clean it up so we can get a little bit more ice time for Darryl to kind of believe in us that we can be out there in important plays, important positions.

Andreoff, on whether “sloppy” play stems from not being able to get pucks out of the zone:
Yeah, there were a couple chances getting the pucks out. We had a couple long shifts, got caught in the D-zone. For a fourth line we have to be in their zone, forechecking hard, finishing our checks, getting shots on net and creating some energy for the rest of the guys.

Andreoff, on the sense that he had a strong training camp and preseason:
I think I had a little bit more confidence this camp. Holding onto the puck, getting a little bit more ice, and for the penalty kill, Johnny was giving me a couple chances out there. I thought I did a pretty good job, so hopefully in the regular season I get a good shot at it, and see what happens.

Andreoff, on whether it’s a challenge to switch between center and wing:
No, not really. I’ve been doing that since junior. It’s been a while, so I’m kind of used to it. Darryl kind of throws me out there wherever, and you’ve just got to be ready for whatever position. They could throw you in there mid-game, or give you a couple practices, so just being ready is kind of the key thing for me.