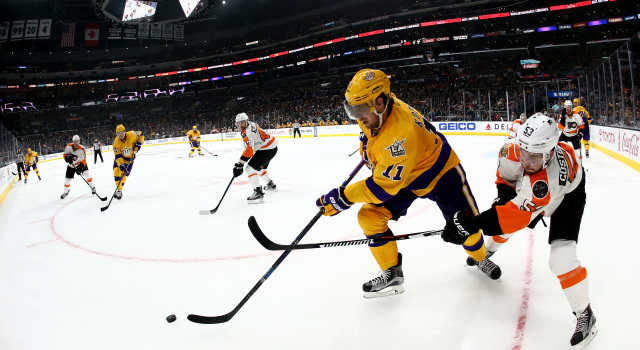 Anze Kopitar, on the second period:
We didn’t play the way we were supposed to play. A couple of bad line changes, a couple of missed coverages, and they cashed in on it. Obviously we just can’t let that happen – you can’t expect to win when you let in four goals in one period, so obviously that second period was not good. We came back in the third with more energy and more like us, the way we want to play, but obviously it wasn’t enough.

Kopitar, on playing without Jonathan Quick, and whether the mantra is to play “the best we can”:
We’re not going to do ‘the best we can,’ we’re going to go and win games. I mean, yeah, he’s a big part of this team and arguably the best goalie in the NHL, but we can’t do anything about it. A magic spell won’t bring him back. We’ve got to play with what we’ve got and play hard and obviously a lot better than we did tonight.

Kopitar, on whether he is more concerned with the team’s play, or results:
Both. [Reporter: What did you think – 0-2, do you feel you’ve been playing OK?] No, we did not play OK. The one in San Jose was close, but not nearly as good as we have to play, and tonight, the second period was not good. We’ve got to definitely be better.

Via the team’s quote sheet:

Drew Doughty, on the team’s effort:
It was okay. Our second period was awful. We relied on our goalie way too much. It wasn’t a good overall effort.

Doughty, on the second period:
We were turning over pucks, giving odd man rushes, and had a few bad changes. It was one of the worst periods we have played as a team in a long time.