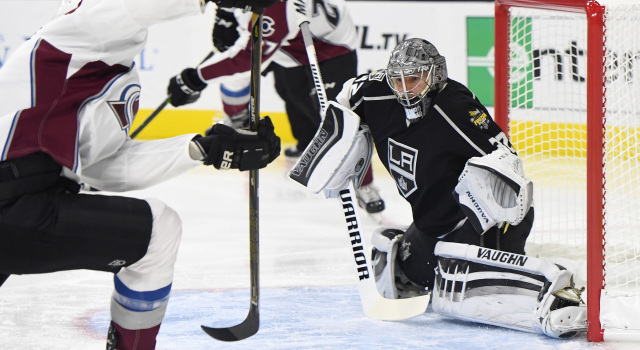 General Manager Dean Lombardi stopped by the area where the reporters congregate outside the Kings’ dressing room this morning and shared an update on Jonathan Quick, who was injured late in the first period in the season opening loss at San Jose on Wednesday.

Lombardi stressed that this is not a short-term injury. Though the term “week-to-week” has been shared by the team, don’t expect to see him back in the crease for the home stand that opens a week from Saturday.

The injury, per Lombardi, is in the “same area” as the groin, generally speaking. The location wasn’t pinpointed – it’s not necessarily the groin, and in fact sounded as if it was in an area near the groin – but Lombardi said that it wasn’t a knee injury.

One thing that was apparent was that the team will do everything to make sure that Quick, who is in the prime of his career and carries a $5.8-million cap hit through 2023, will not be rushed back. The long-term health of the goaltender is paramount, given what Lombardi shared with reporters.

Jeff Zatkoff is expected to start tonight’s home opener against Philadelphia. Peter Budaj, recalled yesterday by Ontario, should serve as the back-up.