Thorne, Strangis, Cuthbert, McDonald to fill in for Bob Miller 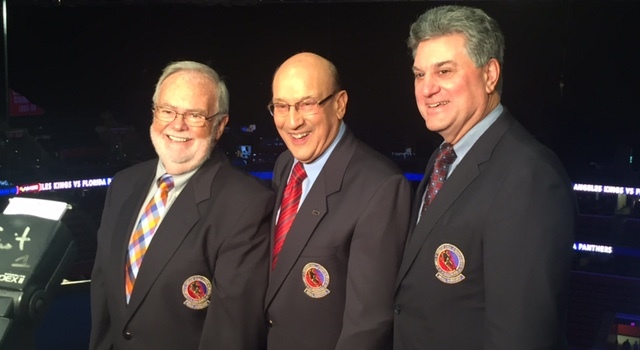 The Kings have filled out the remaining 17 games of the schedule that Bob Miller will be unable to work by hiring Gary Thorne, Ralph Strangis, Chris Cuthbert and Jiggs McDonald, the original Kings play by play broadcaster, as play by play broadcasters. Miller, who turned 78 today, has recovered from quadruple bypass open heart surgery but has elected to limit his travel in the 2016-17 season.

By broadcasting the February 9 game in Florida, Jiggs McDonald will have called games for the Kings in their inaugural season and their 50th anniversary season. He is scheduled to participate in the club’s 50th anniversary celebration prior to this Friday’s home opener at Staples Center against the Philadelphia Flyers.

Via the Kings’ press release:

Thorne has enjoyed a 50-year broadcasting career, covering a multitude of major events and the National Hockey League (for 12 years) including the Stanley Cup Playoffs/Finals for ABC/ESPN and many NHL All-Star Games. He has also called hockey games for SportsChannel America, the New Jersey Devils and at the University of Maine dating back to 1977. He currently calls baseball games for the Baltimore Orioles.

Cuthbert worked for Hockey Night in Canada from 1984-2004 and for TSN since 2005. He also has called games on NBC and NBCSN. He called the 2010 Olympic Gold medal game between the U.S. and Canada, the most watched television event in Canadian history. He has called hockey at every level and has been involved in the ownership group of Guelph Storm (when Drew Doughty was a Junior) and he co-authored the book The Rink Stories from Hockey’s Hometowns (which included a chapter on Darryl Sutter and the Viking, Alberta rink).

Strangis is known best as the former “Voice of the Dallas Stars” hockey team. He was in the booth for 25 years with the franchise going back to their beginnings as the Minnesota North Stars. For his on-air work, Strangis has been awarded seven Lone Star Emmys, eight Associated Press Awards and a Dallas Press Club Katy Award. Recently he has written editorial columns and essays for the Dallas Morning News.

McDonald is the “Original Voice of the LA Kings,” working in Los Angeles from 1967-72 during the club’s very first five seasons. He called the club’s first preseason game, first regular season game and first playoff game. He has also worked as a club broadcaster for the Atlanta Flames, Florida Panthers and the New York Islanders, totaling more than 3,000 contests. In 1990 he was the recipient of the Foster Hewitt Award, which is recognized by a plaque in the Hockey Hall of Fame in Toronto and he will return to Los Angeles for Opening Night as the 1967-68 Kings are reunited.