Quick’s recovery “could be a while”; MRI scheduled 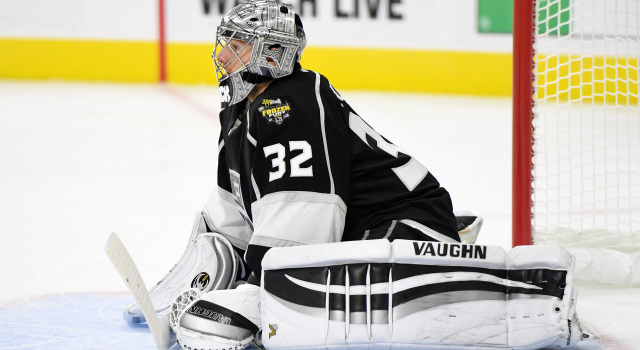 Jonathan Quick suffered a lower-body injury during the Kings’ season opening 2-1 loss to the San Jose Sharks on Wednesday and did not return to the game. General Manager Dean Lombardi said in a text message with LA Kings Insider that it “could be a while” before the goaltender recovers.

Via a team spokesperson, Quick is scheduled to undergo an MRI on Thursday.

On the timing of the injury, Darryl Sutter told NBCSN’s Brian Boucher that it occurred in the “last shift of the first period.” After the game, Sutter said that Quick got hurt “sliding.”

“I couldn’t tell if it was off a player,” Sutter said. “All the trainers said he did it sliding. It’s not that big a deal. We’ve got two or three goalies. Good ones.”

Quick stopped 14-of-15 shots in the first period before he was replaced by Jeff Zatkoff, who stopped 15-of-16 in relief.

The Kings will celebrate their 50th anniversary in the National Hockey League by welcoming the Philadelphia Flyers to Staples Center for their home opener on Friday, October 14.