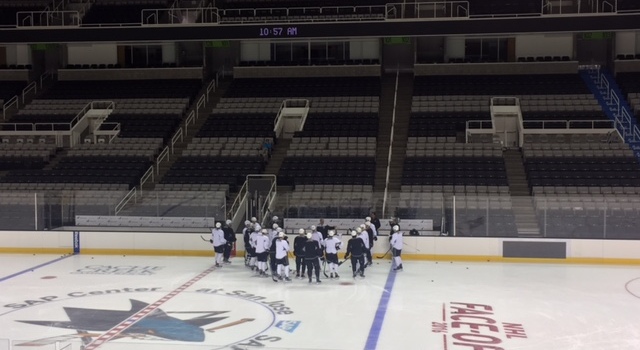 While the early morning clouds having burned off, giving way to a beautiful afternoon, the Kings took the ice shortly before 11:00 a.m. at the SAP Center and aligned as such:

-Jonathan Quick left the ice first and is expected to start against San Jose. The #LAKingsGoalieTweetOff is no longer a thing; respectfully, please don’t ask who the starter is on the days when it’s obviously going to be Quick. If there is any question over who starts, we’ll let you know, provided there’s a morning skate that day. You may also refer to the flowchart, as long as you replace “Jones” with “Zatkoff.”

-The only change would appear to be Nick Shore in for Nic Dowd; when I asked Darryl two days ago what Dowd would have to do to gain more ice time, he replied, “he’s a centerman, so if there are four centermen ahead of him, then take one of them out,” which served as a hint that Shore, upon regaining full health, could open the year above the rookie.

-Devin Setoguchi had to get a few immigration odds and ends sorted out, but they’ve been taken care of, and when he takes the ice tonight he will do so in front of a familiar crowd and with the support of a suite that family and friends will fill out. He spoke with reporters about the emotions of returning to San Jose, which is obviously overshadowed by the need to collect two points with his new club.

-It’s never a stretch to say special teams will play a key role in any NHL game, but at the start of the season, when games are called more tightly – especially stick infractions – the Kings’ fortunes will be heavily dependent on how well they can keep San Jose’s elite top power play unit – which has been together “since Christ was a child,” as one coach might say – off the scoresheet. “On the flip side of that, a lot of our PK units at least up front have been together for a while,” Dustin Brown said. “Early on it’s just about details. The power plays will be there, both sides will be a little off, so it comes down to the details.”

-Filling in for Bob Miller on select road trips this year will be Gary Thorne, Chris Cuthbert, Ralph Strangis and, in the team’s 50th anniversary season, Jiggs McDonald (!). A story will follow soon; Darryl Sutter quotes are up next. Enjoy your Wednesday, Insiders.

Who's happy that hockey season is starting?