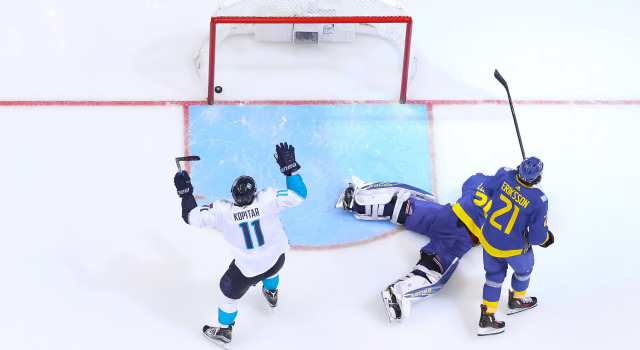 Anze Kopitar, whose 2016-17 campaign began when he qualified for the 2018 Pyeongchang Games with Slovenia last month, endured a pre-preseason odyssey in which he traveled from Minsk, Belarus, to Quebec City, Montreal, Washington, D.C. and ultimately to Toronto, where he captained Europe to a second place finish at the World Cup of Hockey.

How does one even pack for a month of living out of hotel rooms?

“You pack, I guess as much as you can, but at the same time you want to be somewhat light on the suitcases, and then use drycleaning on the road and the fluff and fold,” he said.

Making less sense: Slovenia, which by the IIHF’s count has seven indoor rinks in the country, qualified for its second straight Winter Olympics.

“Well, that was fun too, obviously,” Kopitar said. “I think going in there, we were the underdogs, for sure. Nobody expected us to win, but there’s something special about that group that when we come together, we always have a feeling that something good could happen. It did, again.”

Kopitar didn’t captain Slovenia’s squad, but was wearing the “C” when Europe shocked hockey punditry by winning the Next Best Team To Canada Award, which is a heck of an accomplishment.

“Yeah, I’ll be honest with you, you don’t really know what to expect at first,” he said. “I mean, there are guys from eight countries coming together. Such a short span of time going into camp, and then our preseason game, I think we played after two days, so it was fairly quick, but it was great. It was a really good group of guys. Everybody wanted to be a part of it, which made it a lot easier for us to come together and get … the team chemistry going, so it was a lot of fun.”

Kopitar has earned himself some time off in advance of the NHL season. It’s possible that he may rejoin his team on the ice at practice tomorrow, though that reunion may have to wait as he and his wife are on the verge of giving birth to the couple’s second child. “It could be minutes, it could be hours, it could be tomorrow,” he said.

But as he ultimately joins his teammates for practice – congratulations, by the way, to the Kopitars – he’s of the mindset that he’d like to get a preseason game in before the start of the season. He might not need both Frozen Fury games to ready himself for the start of the season, given that he’s already played in over 10 international games, but would like to get in at least one “just to play with the guys, be in the locker room again and all of that stuff.”

“Darryl’s been really good to me,” Kopitar said. “He kind of asked me what I need and stuff, and we talked about it. First on the agenda now is welcoming the new baby and all of that stuff that comes with it, but obviously I want to get in the thick of things again here. Today I had a nice bike ride and a good workout, and we’ll just see when the baby comes and all that. But Darryl’s been really good about that. I have played 13 games, I think, now. I’ve got games down. I don’t think I need a whole bunch of preseason games.”

Anze Kopitar, on what clicked between Europe’s pre-tournament and tournament games:
I think we just realized that we can’t really run and gun with any team. We had some guys that are pretty fast on our team, but the majority of guys, we had to play boring hockey and not a whole lot of flash – that’s just what it is – and after we started playing that, things kind of fall in place, and that’s why we were successful.

Kopitar, on Ralph Krueger:
It was good. He’s been out of the hockey business for a little bit now, but I think him coming in, he did a good job, obviously very positive as people know, and very upbeat. He was a really good coach for us, because you are playing a tournament that’s such a short span of time, and you’ve got to have that, so it was really good for us. [Reporter: Did you talk soccer with him at all?] We talked a little bit, yeah. He told some stories and kind of told [us about] the teams in club soccer over there, so it was interesting. [Reporter: It’s kind of funny, just because he’s got that job, and he comes in on this, but that’s like the Premier League. That’s a big deal. Did you guys ever find that funny or interesting or anything like that?] It was definitely interesting, but you can tell he still loves hockey a lot. I’m sure for him, that call, he was very excited, and I don’t think ther was any doubt in his mind to say ‘no’ to that. I think he enjoyed it just as much as we did.

Kopitar, on whether he’d like to participate in the 2018 Winter Olympics:
Me, personally? I’d like to go. Not just because we made it again, but I think, from what I heard, guys want to go to the Olympics. I mean, it’s the Olympics, so who doesn’t want to go and be a part of that? I get it that it’s obviously up in the air right now, but I guess we’ll see what happens.

Along with Drew Doughty, Anze Kopitar is expected to return to practice tomorrow. Story up this afternoon at LAKI.