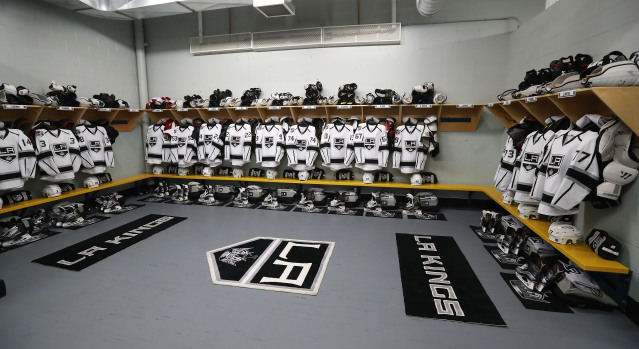 Darryl Sutter, on generating more scoring chances as the game progressed:
There weren’t many scoring chances, so I would say it was control either way. I think it was a pretty evenly played game. Not much to it.

Sutter, on Connor McDavid:
He’s a really good player. Is it the first time you’ve seen him?

Sutter, on the type of step the team took:
Played a good game. It was a good, solid game. Didn’t get many chances. We had chances to tie it up. Gave up a couple young guys mistakes for goals against. First goal was a bad goal.

Sutter, on the environment at the game:
You asked that this morning. It was awesome. It was the same as the pre-game skate. It was awesome. It’s spectacular to see people that never get to go to an NHL game that appreciate and know hockey and all those things. It was great to see.

Michael Mersch, on the team’s performance despite the loss:
It’s right after a game, so it’s hard to digest everything right now, but they have some good players on their team. It’s preseason, still working on things, so it’s been a long preseason, so we’ve had a lot of practices, and I feel things are coming together, but we still have a lot more to do.

Mersch, on the progress the team made on the road trip:
I think just getting back into game speed. There are older guys who are just starting to play and just starting to get into the swing of things, and younger guys trying to pick up with those guys. It’s a lot of mixing and matching, and I’m just getting comfortable as the season goes on. You’ve got to get in that hockey state of mind. Obviously going into camp you work as hard as you can to get there. You know your plays when you’re on the ice and that stuff comes back in preseason as it goes on.

Mersch, on the setup of Brayden McNabb’s goal:
We blocked a shot defensively, and then Toff was coming over, cross-ice support, and made that D have pressure, and then we got the puck in the zone. I just threw it off the far side boards to Carts, and he was coming with speed and shot it back through and it hit off the boards and took a bounce and Nabber put it top shelf. It was a great shot.