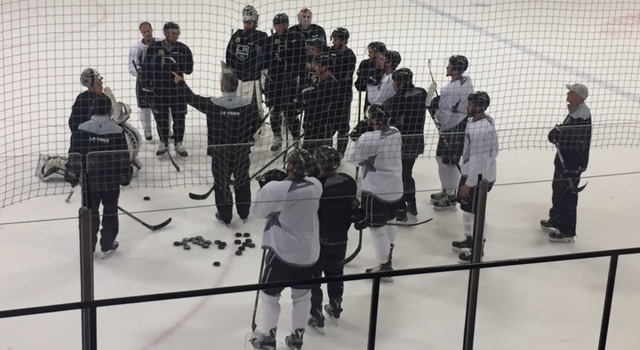 Good afternoon from Toyota Sports Center, where I’ll share a few practice notes and some Darryl Sutter quotes before taking off for Denver. The Kings travel to Colorado to face the Avalanche at Pepsi Center tomorrow before heading up to Vernon, B.C. for a Kraft Hockeyville preseason game at Kal Tire Place on Sunday. That same Sunday, a split-squad team will also face the Anaheim Ducks at Honda Center.

-Darryl Sutter indicated that the decision on whether the team will keep seven or eight defensemen will come into focus next week, once the full contingent of players is available. (Teams may keep up to 23 players on the active roster.) Theoretically there may be a slight trimming of the roster with junior leagues in session, but I’m not anticipating any major cuts until after Sunday’s split-squad games.

-I’ll have a story later today about Brett Sutter playing for Darryl Sutter; according to Brett, it was the first time his father had coached him in a game since he was in fourth grade.

-I’ll also have a story up (likely tomorrow) about Tanner Pearson and what’s expected out of him this coming season, which will be a contract year for the young winger.

-The two practice groups were split into a group that will fly to Denver and Vernon, and one that will benefit from light traffic on a Sunday to travel down to Anaheim. As always, groups are subject to change, and one of the goalies in the later group may actually be traveling today, but I caught these names with their respective groups:

Again, bear with some faulty eyes – they just move so fast! Also, just because a particular player is listed in a particular group doesn’t mean that he will actually play in the designated game(s).